OneWest: The Art of the Runaround

After years of red tape, a homeowner realized the Treasury nominee's bank was bent on foreclosing on her home.

Sylvia Oliver presented this statement at a January 18 Capitol Hill forum hosted by Senator Elizabeth Warren on the aggressive foreclosure practices of OneWest. Treasury nominee Steven Mnuchin became CEO of the bank in 2009, when his investment fund purchased the bankrupt IndyMac and renamed it OneWest. In 2015, he made hundreds of millions of dollars from the sale of OneWest to CIT.

I am a homeowner from Scotch Plains, New Jersey. I got my mortgage from IndyMac in May 2008, and about a month later, IndyMac failed. I want to share my story because it is more than a house — it is a home for me, my husband, and my three children and my grandchildren.

In early 2009, my husband and I were facing financial difficulties. Because of the economy being in bad shape, my husband was between jobs. We reached out to OneWest to request a modification. We were told that we had to make three payments in order to move forward on a permanent modification, and so we made those three payments. 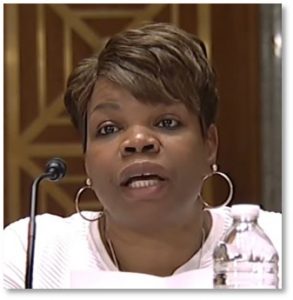 Sylvia Oliver sharing her experience being pushed into foreclosure by OneWest bank at a January 18, 2017 Capitol Hill forum.

After making those payments, I reached back out to OneWest to find out what the next steps were. But I couldn’t get a straight answer from them, so we continued making partial payments, even though it was a challenge for us financially.

In February 2010, I submitted a modification application to OneWest Bank. About six weeks later I received a Notice of Intent to Foreclose. However, the person I had been talking to at OneWest, a man named Albert, told me not to worry, and encouraged me to continue submitting updated documents to the bank.

So, for the next year, I would submit new documents to the bank, through FedEx and through faxes. And, every week, I would call Albert and ask if he had an update on my situation, and every week I was told there was no answer and to call back the next week.

[pullquote]Mnuchin had the opportunity to help families like mine with responsible loan modifications. He didn’t.[/pullquote]

After a year of my weekly phone calls, I finally received a denial letter from OneWest in February 2011, when they said they couldn’t modify my loan. Albert at OneWest told me I could re-apply for a modification, which I did because I really wanted to keep our home.

For the next several months, the cycle would repeat, with the bank telling me to re-apply for a modification, me believing that they were sincere, and then a few months later, being told we had been declined again. This was surprising because during this time we were back on our feet, and our incomes were both increasing, which meant we were in a better position to pay for our mortgage.

At the end of the 2015, I received another notice of foreclosure from the bank. At this point, it became clear to me that OneWest never had any intention of modifying the loan in such a way that they would still get paid back and we would be able to keep our home.

In March of 2016, I hired a lawyer because I thought they might have more success working with the bank than I did. At my attorney’s advice, I filed a Chapter 13 bankruptcy as part of another modification application.

That process went on for about five or six months, with the same cycle of me sending paperwork over and over to the bank, and the same answer again. Last year, I was facing foreclosure three weeks before Christmas, however, that was then postponed until this month. In fact, I was supposed to be foreclosed on by OneWest today. However, after Senator Menedez’s office called OneWest, I learned that my sale had been postponed until next month.

Earlier this month, I sought help from a HUD approved housing counselor. She worked with me and my husband to document our income and to submit a modification application. After analyzing our situation, she was surprised to hear that we had not qualified for a modification earlier, especially since my husband and I both have good incomes.

As of right now, I’m still facing foreclosure next month, and I know in my heart this is because OneWest’s only intent was to foreclose on my home. This bank has had ample opportunities to modify my loan. In fact, they told me that they own the loan, so I know they can’t blame this situation on an investor not allowing them to modify my loan.

Nobody should have to go through the experience that I’ve gone through during the past several years with OneWest Bank. It’s been very painful and stressful not knowing if my kids and my family are going to have a home to live in, or if it’s going to be foreclosed on. I would ask you to remember my experience when you consider whether Mr. Mnuchin is qualified to lead the Department of the Treasury. As the CEO and Chair of OneWest Bank, Mr. Mnuchin had the opportunity to help families like mine with responsible loan modifications, and he didn’t. I don’t think this is a track record that anybody should be proud of.

Sylvia Oliver is a resident of Scotch Plains, New Jersey.

Fighting Inequality in One of the Nation’s Most Unequal States

The emerging statewide coalition Recovery For All is demanding progressive tax reform as a crucial step toward reducing extreme racial and economic disparities in Connecticut.

New IRS data show the wealthy grew even richer in the Trump years while the rest of us fell back.

How UK Foreign Aid Benefits the 1%

Retirement and the Racial Wealth Gap