Organizing After Disasters – Both Natural and Man-Made

New Jersey Organizing Project members fought for the dignity of their community when hurricane recovery efforts prioritized the rich and powerful.

When Superstorm Sandy hit my home in 2012, I was living and working in Washington D.C.  I drove up to check on my dad a few days later, and when I saw my community devastated, part of me didn’t leave. That part of me drew me home. My heart simply would not let me walk away from the suffering that I saw. And, as we know, there are disasters of all kinds in all our communities.

In New Jersey we built an organization of people who had nothing to lose and everything to gain. And we used the organizing structure we built around Sandy recovery again last year when we launched our fight to stop the cuts to the Affordable Care Act and preserve Medicaid. And we know this is an issue that’s important to many of our communities. 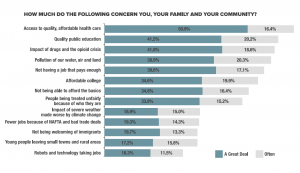 Being there in the aftermath of Sandy I got a preview of our shared future — the devastating impact of climate disasters on our health, on our finances, and on our families.

And under former Governor Christie, I had a front row seat to what happens when we don’t invest in building people’s organizations everywhere in America. By two years after the storm, only 500 families in the state’s recovery programs had made it home. Recovery programs that were supposed to help families worked better for big insurance and banks.

My community felt abandoned by their governor and their government — or blamed themselves. There’s a sense that we’ve been left behind by both parties and machine politics — that the deck is stacked against us and for corporations.

And that’s what People’s Action heard across the country in rural and small-town America.

But — based on almost 2,500 conversations People’s Action has had — our communities are clear that our biggest problem is the rich and powerful controlling government. It is not our neighbors, it is not immigrants, and it is not people who need a hand up.

I saw this when we traveled to New Orleans to meet Katrina survivors.  Though our communities are very different, we shared stories about how the tourist and business areas were rebuilt first and foremost while everyday people struggled.

The strength we forge as fight for our dignity after a natural disaster, in response to the overdose crisis, or fighting for good jobs — that strength can bind us together if we invest in building real people’s organization and get serious about connecting to each other.

This article was adapted from a speech presented at the People’s Action Promise of a Progressive Populist Movement gathering.

Amanda Devecka-Rinear is the Director of the New Jersey Organizing Project and a fourth-generation Cedar Bonnet Island resident with more than 15 years experience in community organizing and strategic leadership.

Movements are using this once-in-a-lifetime political moment to mobilize communities against climate change and corporate greed.

Big Money’s War on the Build Back Better Plan

The administration’s jobs and infrastructure package is very popular, but corporate lobbyists are fighting it tooth and nail.

I grew up poor and traumatized, not knowing how to get help. Now my own child’s life will be better.

Why the World Needs a New Social Contract

Tax abuse cost the world almost half a trillion dollars a year -- enough feed and house everyone and vaccinate ever… https://t.co/vK8kZo5YJm