Civil rights leaders of the 1960s understood that without political power, racial economic gaps would persist.

During the mid- to late-1960s, the main slogans of the African American social justice movements were “freedom now” and “Black Power.”  It was recognized that both political power and economic power were required to attain greater freedom and empowerment in the United States.

As civil rights leader Stokely Carmichael put it in the 1966 pamphlet Power & Racism: What We Want, “We should begin with the basic fact that black Americans have two problems: they are poor and they are black… Any program to end racism must address itself to that reality….”

Sadly, in the past half century there has been limited progress in the political sphere and even less improvement in the economic space.

The current 117th Congress has 57 Black members, which is consistent with the African American demographic representation. But African Americans remain deeply under-represented in political power when looking at the Senate and in governorships.

Currently only 3 percent of all U.S. senators are African American, though Blacks are 13 percent of the American population. There are currently no Black governors, which shows a lack of political strength at the statewide level.

In terms of economics there has been some progress, with a decline of poverty in the African American community over the last 60 years.  Yet, Black/white disparities in income, unemployment, and most particularly wealth have remained strong.  According to 2019 data, African Americans have only 6 percent of the wealth of white Americans, leaving African Americans in deep asset poverty and overall financially vulnerable.

The 1960s racial justice leaders understood that political and economic power are interconnected.

“With power, the masses could make or participate in making the decisions which govern their destinies, and thus create basic change in their day-to-day lives,” Stokely Carmichael wrote.

The graph below by the Washington Center for Equitable Growth shows how movement victories on voting rights in the 1960s increased economic opportunities. Following passage of the 1965 Voting Rights Act, public sector employment for African Americans increased substantially, particularly in Southern states. 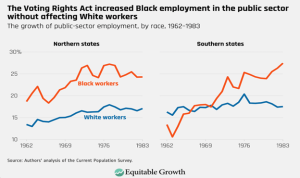 This surge in public sector employment reduced the Black-White wage gap by 5.5 percent in just the first five years. Public sector work was held federally accountable to pursuing equitable hiring, which made it a premium employment destination. Black public sector workers earned 20 percent more than they did in the private sector, hence the large shift in employment placement. Additionally, the magnitude of the government workforce constantly grew, and offered positions that could be impacted by political power, and African Americans exercised that newly re-enfranchised power to fill these vacant positions.

Two reforms that could further strengthen Black voting power and hopefully advance African American economic interests in the political sphere are declaring presidential election days (when many local elections are also held) as a national holiday and enabling same-day registration.

In 2020 the United States had a white voter turnout of 70.9 percent and only 58.4 percent for non-white voters. Pew Center researchers Gustavo López and Antonio Flores found that the third-most cited reason for failure to cast a ballot amongst registered voters was being too busy or having schedule conflicts. Of registered voters who didn’t cast a ballot, this reason accounts for 14 percent, or 2.7 million voters. This number is significant when compared to any of the nine states with the smallest populations. For example, this figure is greater than the combined 2022 populations of the three least populous states — Wyoming, Vermont, and Alaska.

Voting should not be difficult, but the reality is that people in positions of power make it difficult, which ultimately drives turnout downward instead of upward, which disproportionately results in lower registration for Black voters. States that allow same-day voter registration had voter participation rates 10 percentage points higher in 2012 than other states.

The Black freedom struggle that began in the mid-20th century has yet to attain its aims.  Political and economic reforms are necessary to jumpstart progress on racial equality that has stalled for the past more than 50 years.  Taking down barriers to voting is a critical step towards reducing racial economic divides.

Dedrick Asante‑Muhammad is the Membership, Policy and Equity Chief and Connor Sanchez is an intern at the National Community Reinvestment Coalition.