After a Year-Long Strike, Indian Farmers Score a Big Win

The country's prime minister has agreed to roll back laws that threatened to corporatize agriculture, jeopardizing the food security of more than 800 million people and further enriching the ultra-rich.

India’s farmers have mobilized to create one of the world’s most vibrant protests in history, camping on the outskirts of New Delhi for an entire year.

Last month, they were mobilizing to mark the one-year anniversary of the day when farmers faced water cannons and tear gas at the Delhi border as they tried to reach the capital. But a week before the events planned for November 26, they got a big win, as Indian Prime Minister Narendra Modi announced that he had decided to repeal the three controversial farm laws.

There was no cabinet meeting and no ordinance repealing the three laws — simply an announcement. But this historic victory of the Indian farmers is being celebrated by millions across the world.

The three laws threatened to corporatize the food and agricultural sector in India, undermining small farmers, jeopardizing the food security of more than 800 million people, and further enriching the ultra-rich. During Modi’s time in power, the net worth of select Indian billionaires has grown exponentially while unemployment has skyrocketed. (A comprehensive article explaining what the massive historic farmers’ protests in India are about can be found here). 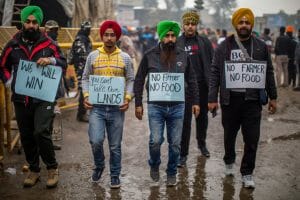 A protest in Delhi in December 2020. (Photo by Yawar Nazir/Getty Images)

The protest began in Punjab, and as the farmers reached Delhi, it began gathering the attention of the world for its scale, longevity and for the tenacious and well organized, yet nonviolent collective organizing efforts.

Farmers’ organizations and civil society organizations across the world have been following these developments closely since the fall of 2020. Early in 2021, two and a half months into the protests, over 87 farmer organizations and allied agroecology, farm and food justice groups in the United States (including my organization, the Institute for Agriculture and Trade Policy), came together to deliver a solidarity statement in support of the Indian farmers’ protests. Our statement drew attention to the fact that what the Indian farmers are enduring now happened in the U.S. almost four decades ago.

It has been invigorating to see how the farmer mobilization has grown in strength, building bridges across the divisions of castes, religions and regions, emphasizing unity as annadata or food-providers, whether as a farmer or farm worker, women or men, and at the same time, building alliances with other progressive struggles.

The timing of Modi’s announcement to repeal the three controversial laws was, of course, political: The announcement was made in advance of upcoming elections in key states, and on the birth anniversary of the first Sikh guru, Guru Nanak. The Sikh community as a whole has been a pillar of support for the protesting farmers, and farmers from key states such as Uttar Pradesh and Punjab (where elections are due) form the backbone of the protests.

Samyukta Kisan Morcha (SKM) — a united front of over 40 Indian farmers unions that has been leading the farmers’ strike — has rightly asked that the laws be repealed through parliamentary process. In a letter to the prime minister, they pointed out that the repeal of the three laws will meet just one of several demands made by the farmers’ unions. They have reiterated six other demands, three of them longstanding, including legally guaranteed Minimum Support Price (MSP) for all crops and for all farmers.

Global civil society organizations are continuing to stand in solidarity with Indian farmers and supporting their demands. The February 2021 solidarity statement specifically lifted up one of the key demands of the movement, asking for farmers to receive a minimum support price — currently assured for just a few crops — for all produce, including vegetables which are essential for healthy diets, and argued that this would ensure that farmers in India, already burdened by huge debts, receive a fair price for their produce. 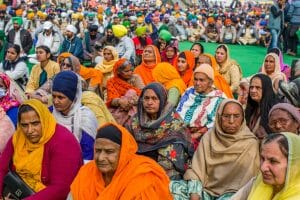 Indian women farmers participating in a protest against the new farm laws on December 11, 2020 outside Delhi. (Photo by Yawar Nazir/Getty Images)

Ensuring remunerative minimum support prices and procurement as a legal entitlement for all farmers and for all agricultural produce continues to be one of the most crucial demand of the farmers moving forward.

The concept of parity is grounded in fair prices for farmers, but it extends beyond that to issues of environmental, cultural and social justice for food producers and their communities. The solidarity statement acknowledged that “much work remains to be done on parity and environmental and racial justice in relation to food and agricultural policy domestically, as well as internationally.”

It is time that both the Indian and U.S. governments include parity pricing and public crop procurement to support independent family farmers and localized food systems, ensuring food sovereignty and securing the livelihoods of millions who are the bedrock of its food security and nutritional wellbeing.

In a letter to the Biden administration in October 2021, the U.S. farm, food and trade justice community lifted up some of the asks in the solidarity statement, asking that the Biden administration stop prioritizing the interests of agribusiness over small farmers, so abetting further corporatization of the food system here and in other countries.

The letter also called on the administration to endorse multilateral governance norms that will support other countries’ ability to transition to climate-resilient, biodiverse and water-conserving food systems that reach all producers.

Some state governments in India seem to be encouraging the Indian prime minster to take climate resilient actions as the center prepares to meet with five SKM leaders. The chief minister of Punjab in India has claimed in a recent interview that he has proposed to the prime minster that the farmers be encouraged to shift to organic production by offering higher minimum support prices for organic rice compared to conventional rice. Such a move for a major crop would not only help India to meet its climate commitments, but also help farmers transition to climate-resilient agroecological practices, enabling consumers access to a healthier food staple. This kind of progress should be the basis for new talks at the global level on trade, climate change, and human rights.

Originally published by the Institute for Agriculture and Trade Policy.

A Strong Economic Case for Federal Investment in Universal Preschool