The Frontlines of the Health Care Fight in Western Pennsylvania

Motivated by her friends' and family members' suffering, a young woman in a depressed steel town joins the movement for universal health care.

Editor’s note: Savannah Kinsey presented this testimony during a House Budget Committee on Poverty in America on June 19, 2019. The hearing was part of a series of events in Washington, D.C. organized by the Poor People’s Campaign: A National Call for Moral Revival to highlight the campaign’s Poor People’s Moral Budget.

I am 22 years old, a member of the LGBTQ community, and I am from Johnstown, Pennsylvania, which is a town of about 20,000 people in Western Pennsylvania. The population of Johnstown is about 77 percent white, 14 percent African American, and 4 percent Latino.

I graduated from Greater Johnstown High in 2014. And even though I graduated, everyday life is still very challenging. This is because the school system is very flawed and doesn’t teach the real history of this country. Education should teach all of us to hear and understand everyone’s differences, and backgrounds that they have come from.

Johnstown used to be a booming steel mill town. But once the mills closed, it went downhill. If you’ve heard of my town at all, it’s probably because of our opioid problem. I’ve known a few people who’ve died, including my friend Nycki.

She was poor, like a lot of people in Johnstown. In fact, Johnstown has the highest poverty rate of any town in the state. Thirty-eight percent of all people and 63 percent of people under 18 are living below the official poverty line.

Nycki turned to drugs and that led to going in and out of jail. She never got the treatment she needed. When she overdosed two years ago, she left behind a four-year-old daughter. Nycki was just 26 years old. 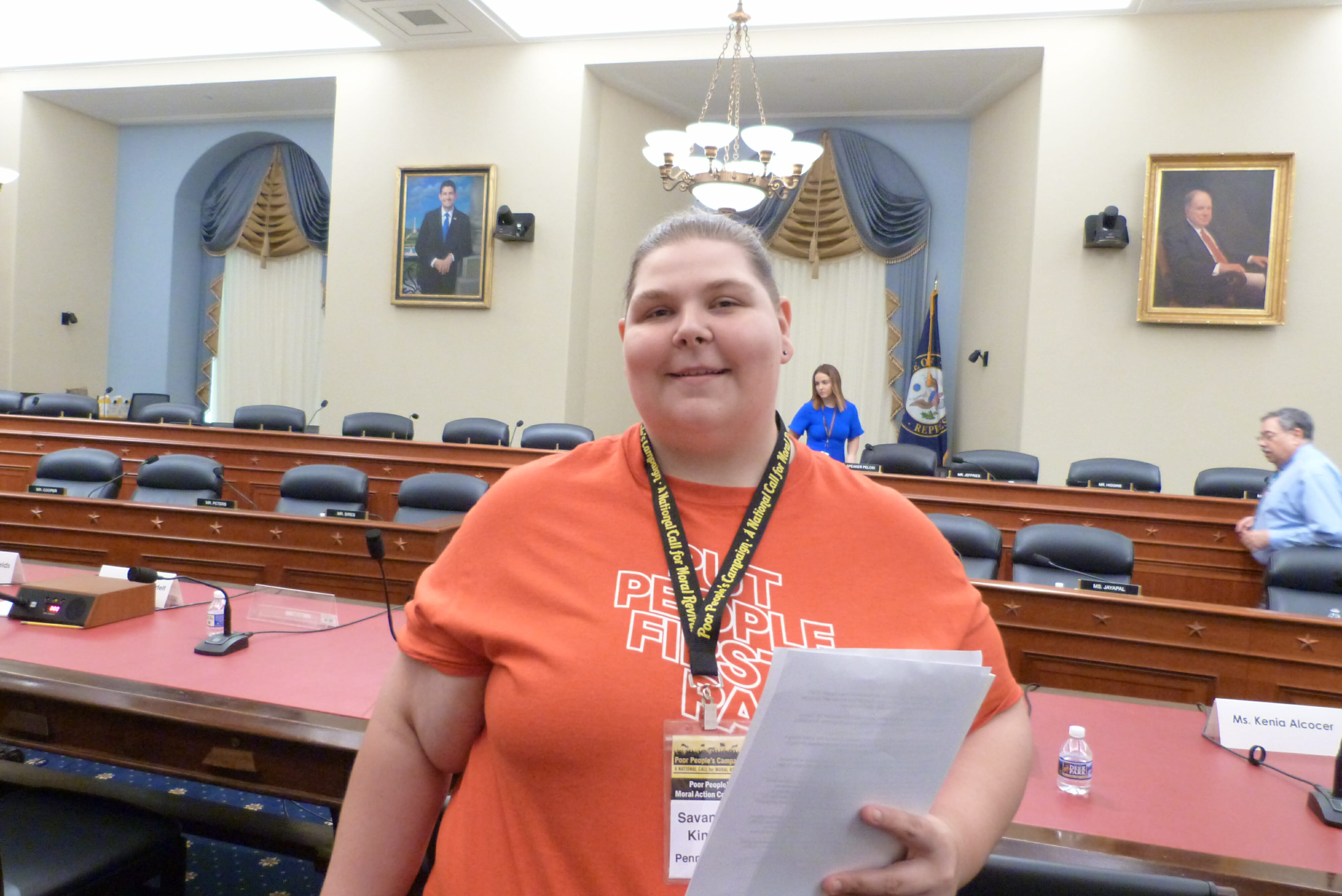 Savannah Kinsey, after testifying before the House Budget Committee, June 19, 2019.

Some people say us young people are lazy. But that’s not true. Johnstown just doesn’t have enough jobs that pay enough to live on.

I’m on disability and Medicaid and I’m grateful for the help I get, but it’s not enough to get by. Last year out of nowhere my benefits for food stamps got cut down to $15 a month. I have tried asking why this was and can never get a straight answer. At the grocery store I sometimes have to put food back or add the charge to my credit card debt because I don’t have the cash. What’s going to happen when all of my credit card is maxed out and still don’t have the cash? I’m not the only person in this boat that’s sinking. There’s many others out there also.

What’s really helped lower my anxiety is getting involved with Put People First! PA. This is a group that gives people like me the opportunity to organize to make things better. To be honest, it’s really become like my family.

I co-coordinate our Healthcare Rights Committee in Johnstown. I often go door to door talking to people about the need for health care for all. It’s hard work but I love the challenge of trying to persuade people to have hope — that we can improve our situation.

What makes me sad is when I talk to people who say there’s no poverty problem in Johnstown. They’ve been told that if you’re poor it’s your own fault. You should just work harder. Or they say that immigrants are the problem.

The real problem, I believe, is that a few people are getting very rich while poor people in towns like Johnstown are just forgotten. Last fall, Put People First! PA organized demonstrations against health care companies. One was Conemaugh hospital, owned by Duke LifePoint, in Johnstown. Do you know how much the CEO of LifePoint made in 2017? More than $13 million. Meanwhile, people — including some of my own family members — have gotten poor care at that hospital, which has a 1-out-of-5 star rating from Medicare.gov.

Nobody should get that rich off a health care system that is not even working. And the problems are not just in Johnstown either. Can you believe life expectancy in the United States is actually declining because of all the drug overdoses? Life expectancy for African Americans in Johnstown is just 64.8 years, almost 15 years below the national average. That is just crazy.

We need to make healthcare a right, with universal healthcare for all. And we need more public investment in communities like Johnstown, so that everyone has the opportunity to a secure, dignified life — not just the wealthy few at the top.

Stock Buybacks are Deadly. It’s Time to End Them.

The Time Has Come for a Global Minimum Wage

752 The number of years a migrant toiling at the Qatari minimum wage would have to work to buy a World Cup VIP sui… https://t.co/8Xyx0RxutR