The hard work of protecting water and land from the long-term harms associated with gold and silver mining takes place daily on the frontlines of tenacious struggles throughout Latin America and around the world.

Indigenous people and affected communities face many reprisals for their resistance, including a mounting number of arbitration suits against their governments from mining companies suing over projects that people have managed to halt through direct action and in the courts.

This month, in Guatemala, the Peaceful Resistance “La Puya” celebrates eight years of struggle against a gold mining project that threatens to pollute or dry up already scarce water supplies in an area just north of Guatemala City.

Day after day, since March 2012, community members have rotated in shifts to keep 24-hour watch over the access gate to the “El Tambor” gold mining project. Catholic masses, community meetings and cultural activities have punctuated this nearly decade-long vigil along a stretch of dusty road adorned with banners declaring resistance to mining.

Local residents living in the “dry corridor,” as this area is known, are concerned that gold mining would aggravate water shortages and contaminate water supplies with arsenic and heavy metals, putting people, plants, and animals at risk.

Speaking to a crowd of all ages that gathered to celebrate La Puya´s anniversary on March 8, Doña Feliza Muralles remarked that Christmas, New Years, Holy Week, Mother´s Day, and birthdays have all been celebrated at their peaceful encampment.

“We have done this purely of our own will,” she said. “We have donated this time in defense of our territory and of future generations… and we´ll continue to struggle until the end.” 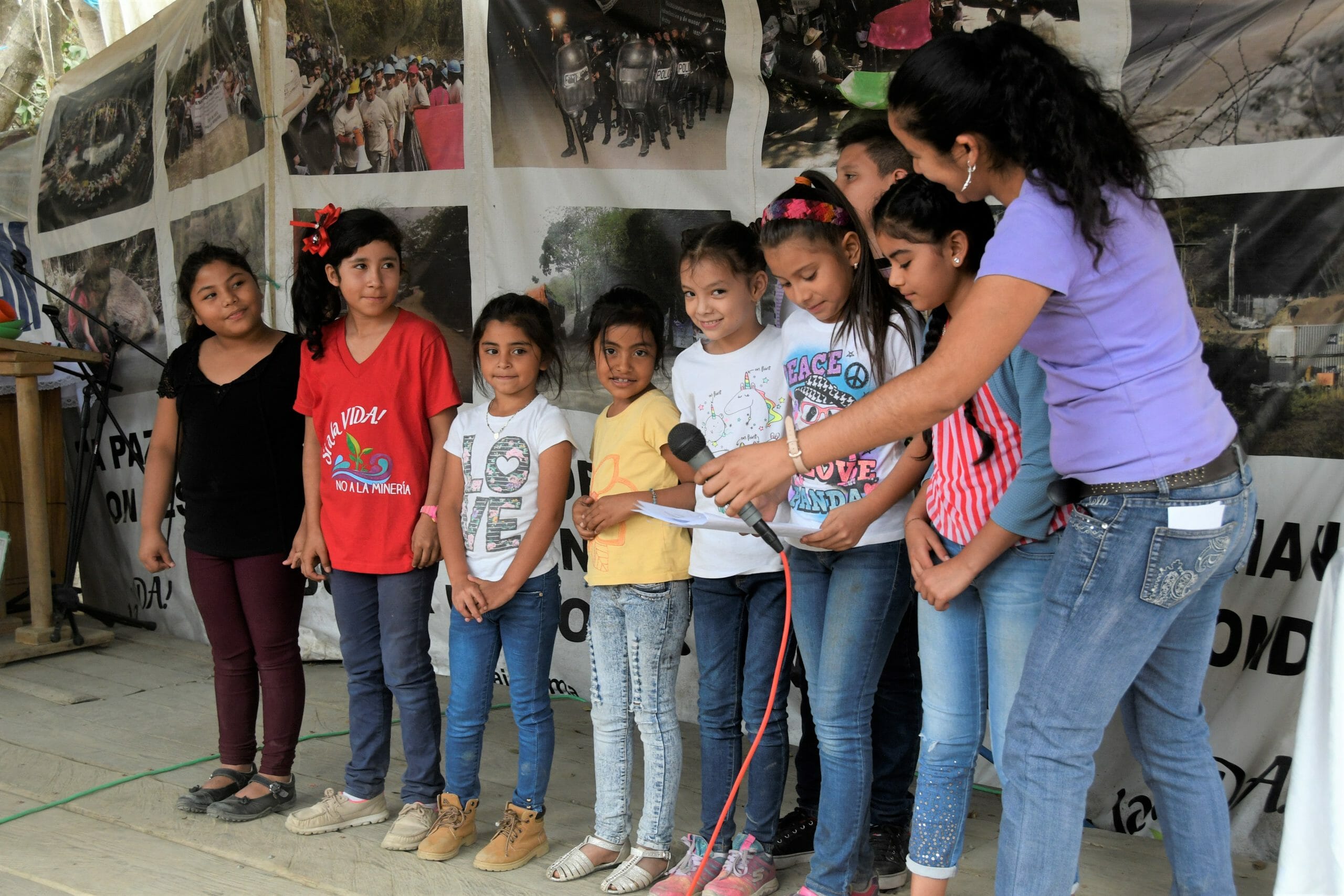 For their peaceful resistance, La Puya has faced serious reprisals. Twenty community members have faced unjust legal accusations and there was a past attempt on the life of a member of the resistance. Between 2012 and 2014, the community turned out en masse — with women leading the way — to face down police deployed to evict the resistance and enable the company access to the site. As a result, for a brief time from 2014 to 2016, the company managed to operate the mine.

In 2016, the peaceful resistance turned to the courts. They achieved the mine´s suspension for lack of prior consultation with Indigenous people. Shortly later, an investigation was opened against the president of KCA, Daniel Kappes, and the general manager of the mine in Guatemala for illegal exploitation of natural resources, when the company failed to respect the suspension order and continued operating. The Guatemalan constitutional court also found that the mining company failed to obtain a municipal construction license for the project.

But La Puya’s fight is not over.

While lacking any social or legal grounds on which to operate its mine in Guatemala, KCA has slapped Guatemala with a US$350 million international arbitration claim at the World Bank´s International Centre for Settlement of Investment Disputes (ICSID) over alleged violations of the Dominican Republic-Central America Free Trade Agreement (CAFTA-DR). This month, the arbitration panel admitted the case for consideration on its merits.

In recognition of the communities’ ongoing resistance, earlier this month, over 100 organizations from Guatemala and throughout the Americas sent a letter to La Puya in celebration of their persistent struggle and in solidarity with them in their upcoming battles.

Meanwhile, other mining companies have continued to threaten governments with suits over unwanted projects.

This is a trend the Institute for Policy Studies has previously reported on. The Extraction Casino study looked at 38 cases that mining companies have brought with increasing frequency against Latin American governments since 1998. Over half of these cases concern government measures regarding the implementation or modification of environmental and mining regulations. One third hinge on the issue of Indigenous rights and community consent.

In recent months, three more such cases have been threatened.

In late February, a Chinese consortium of Junefield Mineral Resources Limited and Hunan Gold Group threatened to bring a suit against Ecuador for $480 million over the suspension of the Rio Blanco mining project. Local communities achieved the suspension of this underground gold and silver mine in the highlands of south-central Ecuador in 2018 for lack of prior consultation.

This is a project that should have stopped much earlier. According to a constitutional-level decree issued by Ecuador´s National Constituent Assembly in 2008, all mining concessions were ordered extinguished that overlap with protected areas, impact on water supplies or lacked prior consultation with affected communities. This includes the mining concessions associated with the Rio Blanco project, which are located within a natural protected area and were not consulted with local communities, according to an analysis carried out by the Environment Defenders Law Center and MiningWatch Canada.

This company´s threat of arbitration should not be permitted either.

Ecuador cancelled 16 bilateral investment agreements in 2017, including one signed with China in 1994. Ecuador’s 2008 Constitution in Article 422 declares that treaties or international instruments that permit international arbitration are unconstitutional for undermining the nation´s sovereignty.

Cecilia Olivet, Coordinator of the Trade and Investment project at the Transnational Institute, participated in a 2013-2015 audit of bilateral investment treaties in Ecuador. She points out that although the 1994 bilateral investment agreement between Ecuador and China allows Chinese companies that invested prior to its cancellation to continue making use of the treaty for another 10 years, the grounds for bringing arbitration within the treaty are highly restrictive. According to this treaty, arbitration disputes should be limited only to disputes over the value of expropriation of a given project.

This is not the case with the Rio Blanco mine.

But such technicalities are hard to rely on when disregard for the rules is a feature of the international arbitration system. George Kahale III, the chairperson of a Washington-based law firm who defends governments in such suits, has described the system as the “Wild Wild West of International Law”. According to Kahale III, when it comes to international arbitration “there are really no hard and fast laws” and “misrepresentations of fact and gross mis-citations of authorities are rampant and, when discovered, usually go unpunished.”

It is further worrisome in the case of Rio Blanco, despite local opposition and all the irregularities, that an Ecuadorian official responded to the Chinese firm´s threat of arbitration expressing willingness to enter into a dialogue with the company to resolve its concerns, stating that he hoped the mine would soon resume operations. Meanwhile, affected communities remain on high alert to defend their territory from mining activities.

Another suit was threatened in December when Canadian mining company Lupaka Resources gave notice of its intent to sue Peru over its Invicta gold project. The community of Parán, several hours north of Lima, has been blockading this project given their concerns over potential contamination of their water sources and impacts on their livelihoods as successful peach farmers. Earlier talks broke down between the farmers and the company when the community learned that the environmental impact assessment for the project had been approved without their prior knowledge.

Then, this month, another Canadian mining company, Gabriel Resources, announced its second threat of arbitration against Romania. Gabriel Resources already has a multi-billion dollar case underway against this country for not having permitted an open-pit gold mine that would destroy the community of Rosia Montana, which has a 2,000-year-old cultural heritage. Now, the company is threatening to sue over efforts to have this area declared a UNESCO world heritage site, hoping to pressure Romania to withdraw its application to UNESCO while claiming that such a designation is incompatible with its mining project.

When there is so much at risk for the community there is only one thing of concern in such arbitration, as Adrian Petri from Rosia Montana recently stated during a protest over Gabriel Resources´ suit: “To the arbitrators, Rosia Montana is about money, money, and again money.”

The international arbitration system does not take into consideration the long-term impacts that these mining projects could have on the water, lands, livelihoods, and values that these communities are defending. Meanwhile, arbitration processes can bring terrible pressure to bear from outside on these local struggles, serving as yet another vehicle with which mining companies can bully their way around in defiance of people´s self-determination and the sovereignty of states.

But just as water protectors press on against tough odds to defend land and life from the onslaught of mining projects, so must we continue to build solidarity with them and strengthen efforts to bring an end to investor state dispute arbitration and the agreements that hold it in place.

Means-tested cash transfer programs are leaving huge numbers of the poor in Jordan, Palestine, and Lebanon without the help they need during the crisis.

Wealthy corporations may use trade courts to keep public health measures from cutting into their profits.

A Pandemic is No Time for Precarious Work

The globe is in crisis. Medical supplies, food, and other necessities are needed during the pandemic. Meet the coal… https://t.co/Dwwb0dnk1L