Vice President Kamala Harris is traveling to Guatemala this week to discuss solutions to the poverty, violence, and corruption that are among the driving forces of migration. Contributing to these drivers are neoliberal arrangements, such as the Central America–Dominican Republic Free Trade Agreement (CAFTA-DR), which have been imposed on Guatemalans. This framework favors the development of large-scale mining and energy projects that are devastating to the well-being of rural communities and Indigenous peoples, while allowing private corporations to sue governments over hard-fought social and environmental protections.

Case in point: A Nevada-based mining company is suing the Guatemalan government for over $400 million, claiming violations of investor protections in the CAFTA-DR. Kappes, Cassiday & Associates (KCA) argues in part that the government failed to adequately protect its mine from local communities that set up a peaceful protest camp out of fear that gold mining would contaminate scarce water supplies.

This accusation against the government could not be further from the truth. In fact, the Company would not have been able to operate its open-pit gold mine in the region in the first place if not for disproportionate police actions to defend the company’s interests and repress community members. Just a couple of weeks ago, police put on an intimidating show of force on behalf of KCA, a reminder of the strong government backing that mining companies in Guatemala have long enjoyed.

Early on the morning of May 21, nearly 40 police patrol trucks, including an anti-riot unit, showed up outside the mine gates where community members organized as the Peaceful Resistance La Puya have maintained their protest camp since March 2012. The police arrived several hours before the start of a routine action to lift a seizure order on KCA’s assets. 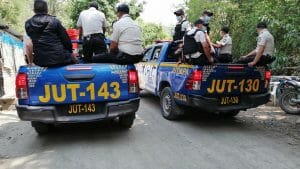 The company’s assets were frozen in mid-2016 for illegal mineral extraction after it defied a court decision in late 2015 that suspended the mine for lack of prior consultation with local communities. While the seizure order is lifted, the mine must remain closed until a consultation process takes place.

The Peaceful Resistance La Puya condemned the act of intimidation on May 21 in a public statement denouncing the use of police “to protect the economic interests of foreign extractive companies.” In the same communiqué, they reaffirmed their “rejection of the mining project as destructive and a threat to the life of the population and their natural commons.”

Almost seven years earlier to the day, on May 23, 2014, police violently evicted the Peaceful Resistance La Puya, clearing the way for the company to begin operations. Unwilling to give up, the resistance camp resumed outside the mine gates shortly after, but the damage was done. KCA operated the El Tambor mine for nearly two years until the courts forced its closure.

Community members active in the resistance to KCA’s mining project faced other acts of physical violence, intimidation, and threats, including an attempted murder. A number of them were also subject to drawn-out cases of legal persecution that have been criticized for failing to follow due process or lacking in evidence.

A World Bank investment tribunal will rule on the KCA lawsuit against the Guatemalan government. In addition to claims regarding government security, KCA is also retaliating against the court’s decision suspending the mine. The company argues that it is being discriminated against, even though two other mines were suspended on similar grounds. The reality is that local communities are the ones whose rights have been trampled. KCA did not fulfil environmental regulations in Guatemala, nor did it ever obtain a construction permit to build its mine in the first place.

Such injustice is precisely what the Investor-State Dispute Settlement (ISDS) framework enshrined in thousands of free trade agreements, bilateral investment treaties, national investment laws, and contracts around the world enables. As an enforcement mechanism for protecting investor rights, ISDS has principally been used as a neocolonial instrument to discipline and punish governments and peoples in the Global South in order to protect transnational companies over everything else.

Nearly a third of the more than 1,000 known suits filed have been brought against governments in Latin America. Disputes with affected communities that are resisting mining operations or seeking remedy for harms are most often at the center of ISDS cases involving the mining sector in the region.

In addition to Guatemala, mining companies have sued Panamá, Peru, Ecuador, and Colombia over regulatory decisions to revoke operating permits as a result of lack of prior consultation and consent from affected communities. Mining companies have also sued governments after failing to obtain environmental permits for their mining projects in Mexico, El Salvador, the Dominican Republic, and Colombia.

Three Canadian mining companies are suing Colombia for more than $800 million over court decisions to protect a fragile, high altitude ecosystem that is vital to ensuring water supplies for millions of people downstream. The Chilean copper company, CODELCO, is threatening to sue Ecuador for a second time over the Llurimagua project — the first suit was brought by a Canadian mining company that walked away with an award of $19.4 million. This suit concerns a proposed open-pit copper mine in a highly biodiverse part of the country where local communities have been resisting mining since the 1990s.

This system of arbitration only magnifies the tremendous asymmetries between corporations that can walk away with millions whether or not they have ever gotten a drill in the ground, while communities struggle to get any justice at all for harms they face. More frequently, the justice system is turned against them. This is readily apparent at La Puya where people have been criminalized and repressed by the government and the company for trying to protect the scarce water supplies that sustain them.

It is outrageous that KCA can sue Guatemala for even greater police protection in this context. This case belies the absolutely life-destroying spirit with which investor rights have been conceived and wielded. The Biden administration should commit to dismantling this system.

Financialization of the Global Care Economy: Maximizing Profits at the Expense of Those in Need

Only through democratized finance can we build a care economy that supports the rights of women, workers, and care receivers.