Walmart, FedEx, Bank of America, and Wells Fargo are among the large U.S. corporations stealing the most from their workers.

For the past two decades, Walmart has repeatedly been accused of compelling workers to perform certain tasks off the clock and has paid numerous fines for those practices. It is often suggested that the retailer is an anomaly, acting more like a fly-by-night sweatshop than a corporate giant.

I recently completed a research project showing that, on the contrary, off-the-clock work, denial of overtime pay through misclassification and other forms of wage theft are pervasive in American big business. After digging through court records for much of the past year, I found more than 1,200 successful wage and hour lawsuits against hundreds of the country’s largest employers. These collective action suits have yielded some $8.8 billion in settlements and verdicts in the period since 2000. The same group of corporations have paid around $400 million in fines to the U.S. Department of Labor.

These findings are contained in Grand Theft Paycheck, a report just published by the Corporate Research Project of Good Jobs First and the Jobs With Justice Education Fund. The data has also been incorporated into Violation Tracker.

Among the dozen most penalized corporations, Walmart, with $1.4 billion in total settlements and fines, is the only retailer. Second is FedEx with $502 million. Half of the top dozen are banks and insurance companies, including Bank of America ($381 million), Wells Fargo ($205 million), JPMorgan Chase ($160 million), and State Farm Insurance ($140 million). The top 25 also include prominent companies in sectors not typically associated with wage theft, including telecommunications (AT&T), information technology (Microsoft and Oracle), pharmaceuticals (Novartis), and investment services (Morgan Stanley and UBS). 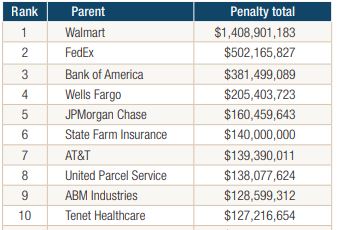 More than 100 large corporations have paid penalties in three or more collective action lawsuits. Bank of America and its subsidiaries did so two dozen times.

Although there are fluctuations from year to year, the lawsuit penalty total reached a high of $1.3 billion in 2016. The tally in 2017 was $732 million, the fourth-largest yearly total.

There have been seven individual settlements in excess of $100 million, including the $640 million omnibus settlement by Walmart of more than 60 lawsuits and two FedEx settlements each in excess of $200 million. Since collective actions are usually settled before trial, there are few verdicts. But Walmart leads in that category too, with a judgment of $242 million. It has also paid the largest single fine: $33 million to the U.S. Labor Department.

The occupations represented in wage theft lawsuits range from low-wage jobs such as cashiers, cooks and security guards to higher-paid positions such as package delivery drivers, nurses, pharmaceutical sales representatives, and financial advisors.

Of the 10 most penalized industries, all but two employ large numbers of women and in about half the percentage of Black and Latino workers is greater than in the workforce as a whole.

The totals and rankings are based on penalties that were publicly disclosed, though the report documents 127 cases involving 89 large companies that petitioned courts to keep the details of their wage theft settlements confidential. AT&T, Home Depot, Verizon Communications, Comcast, Lowe’s and Best Buy each had multiple sealed settlements.

Many companies accused of wage theft are highly profitable. Among the dozen most penalized corporations, all but two had an annual net income of more than $2 billion in their most recent fiscal year. AT&T, JPMorgan Chase, and Wells Fargo each had more than $20 billion in profits. These companies pay their chief executives generous salaries and bonuses. CEOs at AT&T, Bank of America, JPMorgan Chase, and Walmart receive annual compensation of more than $20 million each.

Companies such as these can afford to pay their workers properly. It is time for Corporate America to remove wage theft from its business model.