Sixteen Years Later, a Helicopter Returns to the Site of the ‘World’s Most Famous Photograph of Inequality’

As we recreated his legendary aerial shot of Sao Paulo, I connected with Brazilian photographer Tuca Vieira around our shared passion for creating provocative images of spatial inequality.

As a photographer working in the field of aerial imaging and urban environments, I frequently need to distance myself from my subject matter, either via drone or helicopter. What this aerial approach has given me is an unparalleled view of inequality that reveals the earth as a “surface of human inscription,” as Eyal Weizman puts it, and serves as my contribution to an increasingly dire problem.

Unequal Scenes is a photographic project and platform for multimedia storytelling that I launched in 2016 and that has allowed me to capture revealing views of urban centers from Mumbai to Minneapolis and Dar es-Salaam to Detroit. It would not have been nearly as successful if I had started by taking pictures from ground level.

That’s why I was excited to meet Tuca Vieira, the Brazilian photographer who in 2004 shot what became known as the world’s most famous photograph of inequality. Not only does he work in the same medium of aerial photography as I do, he also experienced a strange sort of “fame” from his photograph, which I saw as a kind of a parallel history 16 years apart, to what happened to me. 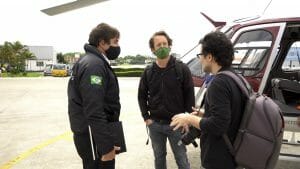 Vieira was working as a photojournalist for the daily newspaper Folha de São Paulo when he shot the iconic image of the São Paulo favela of Paraisópolis next to its wealthy neighbor Morumbi, from a helicopter (with film, no less). He told me that even though the image was published in the newspaper, it wasn’t a hit right away — only later, once a European magazine ran the image, did it achieve a kind of virality in the early days of the internet.

Vieira found success with the image, winning awards, exhibiting the work, and being published in many outlets, but with that success came a distorted understanding of inequality in Brazil. The image became, and remains, a symbol of excess, divorced from not only its author (Vieira), but in part, from São Paulo and Brazil as well.

Vieira writes on his website, “In this building with the pools are not the richest, who, in turn, do not live close to the poorest, who, in turn, are not residents of Paraisópolis…Perhaps this is the great merit of the photo. It freed itself from the author and the original context to enrich a debate about Brazil, about Latin America, about inequality. For a socialist’s son, raised in an environment of indignation and desire for social transformation, nothing could be more rewarding.”

Since coming to Brazil, I have lost count of the times someone has said to me that Vieira’s photograph of Paraisópolis “doesn’t represent real Brazilian society.” And it’s true — Paraisópolis is well situated for a favela. It is close to wealth, to transportation, and to jobs in more affluent communities that surround it. Most favelas in São Paulo are located on the periphery, far away from fancy apartment buildings of the kind that looms large in Vieira’s photo. Those favelas are forgotten, unknown to foreign photographers in helicopters and newspaper editors. In this sense, the critics are absolutely right. 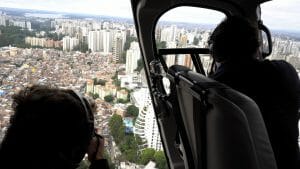 Approaching the site of the 2004 shot that became known as the “world’s most famous photograph of inequality.” Photo: Johnny Miller, 2020.

But wait. Isn’t it still a “true image”? Isn’t it still a legitimate photograph of Brazilian society? It hasn’t been Photoshopped. It hasn’t been dreamed up as “fake news.” This place, this view, exists. And, moreover, how could a photograph be any more nuanced than what it already is? It is our understanding of the image which can become more nuanced — but not the image itself.

This narrative, often (but not only) coming from those involved in data and academia, revolves around the idea that photography of the kind I present in Unequal Scenes is un-nuanced, reductionist and unfair, and serves to further an unhealthy fixation on spectacle at the expense of “reality.”

Couldn’t I, perhaps, focus on the housing developments that the government has built, or the promising statistics on electrification? Wouldn’t that show a more balanced view of society? But critiques such as this overlook the calculated and planned aspect of activist photography — and also reconfirm the importance of writing (and reading) the captions. As I wrote on Unequal Scenes’ website, “If the images provoke uncomfortable feelings of fear, despair, or an unsettling realization of complicity — good. They are intended to.”

About two weeks ago I met Tuca in person in São Paulo, and we agreed to recreate his famous 2004 helicopter flight over Paraisópolis. Unsurprisingly, the divide was still there, and the eerie, somewhat abandoned-looking luxury apartment block still looms over the squat brick houses below. What I didn’t expect was the radical change from 2004 in the built environment. Homes in the favela have been replaced, or modified completely. The road is obscured by new development, the trees are now fully grown, and even the wall seems less imposing. The two photos, 16 years apart, are recognizable as siblings but also distinctly different. It made me reflect that maybe this is part of the importance of aerial photography — not the fact that a single image can sum up “the truth,” or has nuance, or does not, but that by freezing a moment of time we can create comparisons, data points of our own. 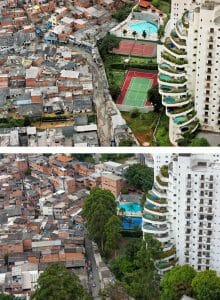 To me, the conversations I have in São Paulo, Cape Town, Detroit, and many other cities around the world are the whole point — the end in itself.

If we want to create a healthier, more equitable world, we have to understand the context we are starting from, and for that we need to know what it looks like. It’s like pushing the “tare” button on a digital scale. If you want to get an accurate weight, you have to know where zero is — or, to put it another way, in order to understand a complex phenomenon (society) you need data. And in our visual culture — where in our daily lives we see so many images of the dominant narratives that fill our screens and bombard us with the way the world “is” — we need photography that is uncomfortable, and real, and acts itself as that data. It is not supposed to be comfortable, or easy, but it is necessary.

Johnny Miller is an American-born, South Africa-based photojournalist and activist and the founder of the award-winning project Unequal Scenes. His drone-assisted images of spatial inequality have been featured on the cover of Time and in exhibitions around the world. He is an Atlantic Fellow for Social and Economic Equity. Follow him at @UnequalScenes.