Greater economic equality benefits all people in all societies, whether you are rich, poor, or in-between. Countries that have chosen to be more equal have enjoyed greater economic prosperity while also managing to develop in a more environmentally sustainable fashion.

In contrast, countries that have taken the road of growing inequality, such as the UK and the United States, have seen increasing complaints from their populations about the costs or scarcity of healthcare, housing, and many other basic necessities. Poorer countries that are more unequal also see more suffering.

From the 1920s right through to the early 1970s, economic equality was increasing most of the time in the world’s affluent states. We have been growing more unequal ever since.

What the evidence tells us

Equality pays dividends at every stage of life

Struggles for other forms of equality — gay rights, women’s rights, civil rights, disability rights — continued to advance after the 1960s, and major gains on many of these fronts would be widely introduced after the 1990s. But these gains often came without the economic emancipation that could have enhanced their impact. 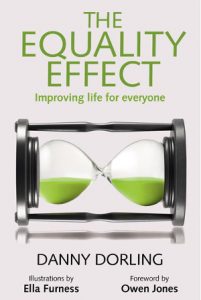 Even right-wing politicians, meanwhile, now sometimes talk of wanting to increase economic equality. They often express their concern for those “left behind” economically. It is hard to see any evidence that these politicians really care about anything other than grabbing some new votes. But the fact that they have changed how they speak about inequality demonstrates a more widespread change in our common understanding.

The immediate predecessors of today’s right-wing politicians talked about “rewarding talent” and “allowing the tall poppies to bloom” to the supposed (but not actual) benefit of all. Now even the perpetrators of growing inequality claim they are against it. They do not, of course, admit to their own complicity in creating, maintaining, and even increasing inequality.

The tide may be turning again towards greater economic equality, but the case for it needs to be made clearer — or right-wingers will again subvert the argument. They will claim they are against inequality while quietly promoting a rebranded version of it.

The case for greater equality is not just the reverse of the case against income and wealth inequality. Gaining greater equality has a set of particular positive effects on a society that we can call “the equality effect.” Greater economic equality makes us all less stupid, more tolerant, less fearful, and more satisfied with life.

Greater economic equality may bring even greater benefits than that. We are not sure because we have tolerated immense inequality for so long that we can’t be certain of all that is possible when we eventually do treat each other with economic respect.

What the evidence tells us

Equality pays dividends at every stage of life

Oxford geographer Danny Dorling speaking at the London School of Economics: May 2017.

How Inequality Endangers Our Mental Health

by Richard Wilkinson and Kate Pickett

Trump Launches War on the Poor