What Does Eleanor Roosevelt Have to Do with Black Lives Matter?

Socioeconomic rights enshrined internationally in the Universal Declaration of Human Rights 70 years ago are increasingly animating U.S. campaigns against inequality.

Eleanor Roosevelt famously said that human rights must begin in “small places, close to home.” To speak to people’s everyday experiences in these places, the Universal Declaration of Human Rights — drafted with her leadership — protects not only civil and political rights but also socioeconomic rights “indispensable” for human dignity. These include the rights to work and to just and favorable conditions of work; to education; and to housing, medical care, and social services necessary to ensure an adequate standard of living.

During her lifetime, Roosevelt would not have seen much progress towards the realization of socioeconomic rights for many in her own country (she died in 1962). But today that egalitarian vision is increasingly animating civil society activism and influencing political discourse in the United States. On the 70th anniversary of the Universal Declaration of Human Rights, that’s worth celebrating.

During the drafting of this historic declaration, U.S. officials supported including socioeconomic rights. However, human rights quickly became a casualty of the Cold War’s ideological battlefield. Soon after the United Nations General Assembly adopted the declaration in 1948, the anti-communist president of the American Bar Association denounced it as nothing more than “pink paper.” The Daughters of the American Revolution similarly criticized the United Nations for causing unrest and discontent by “preaching equality” to unequal people. 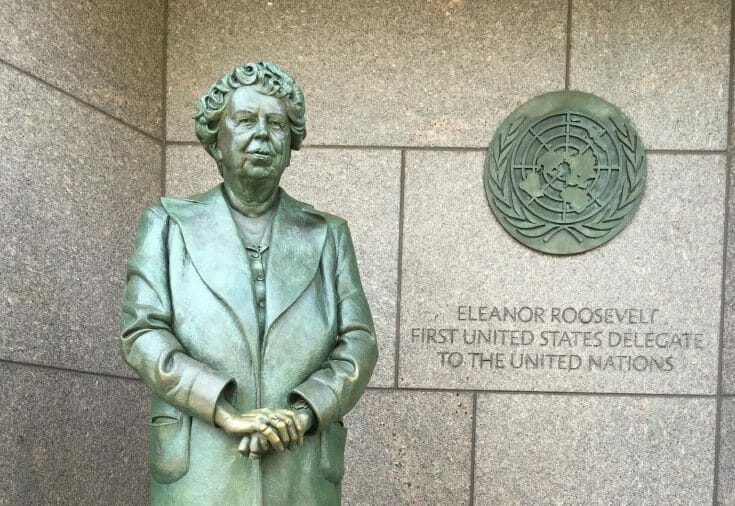 Internationally, diplomatic efforts to translate the Universal Declaration into binding law stalled. Instead, almost 20 years later, two separate covenants were eventually negotiated: one on civil and political rights and another on economic, social and cultural rights. The United States is one of only a handful of major countries not to have ratified the latter.

In the United States, the vibrant mass movements for civil rights and racial equality that grew in the 1950s and 60s made limited reference to international human rights law. Constitutional rights were central, but human rights largely fell off the political radar. As Carol Anderson documents in Eyes off the Prize, this wasn’t accidental. It was a tactical response to the repressive era of McCarthy-era politics, when those who advocated for rights were seen as “antithetical to basic American freedoms” and “punished mercilessly.”

In the past decade, however, appeals to universal human rights have gained renewed traction, animating a range of U.S. socioeconomic struggles. Activists are increasingly leveraging rights to call out the injustice and structural racism inherent in regressive public policies, including the defunding and deregulation of essential public services. The contamination of Flint’s water supply, for example, sparked demands for the right to water, while the growing maternal health crisis for Black women has strengthened calls for the right to health care.

Human rights are also inspiring forward-looking programs of action. As Naomi Klein emphasizes, “no is not enough.” We need a compelling vision to compete with the status quo—one that that offers a tangibly better life to those suffering. Social movements are drawing on human rights to spell out that vision.

Politicians are starting to listen, too. In debates about the Affordable Care Act, healthcare has been championed as a human right by senators Bernie Sanders, Kamala Harris, Kirsten Gillibrand, and others. Housing as a human right is also gaining support, particularly among up-and-coming congressional representatives. It was a key pillar of Alexandria Ocasio-Cortez’s and Ilhan Omar’s platforms, for example.

Understanding economic inequality as a cause and a consequence of human rights violations has the potential to be transformative. Rights help shift the narrative about what is just and unjust. By demanding that certain material needs are so essential for human flourishing that they must be guaranteed to all, rights directly challenge the logic of market fundamentalism. That’s powerful. Responding to this demand means making significant structural changes to the way decisions are taken about how the economy functions.

Roosevelt feared that unless human rights had meaning in homes, schools, factories, farms, and other workplaces, they would have little meaning anywhere. Seventy years later, there’s still a tremendous amount of work to do to give human rights meaning in the places they’re needed most acutely. But to see today’s activists increasingly rallying around socioeconomic rights is testament to the enduring vision of the Universal Declaration. I have to think Eleanor would be impressed by that.

Allison Corkery is an Atlantic Fellow for Social and Economic Equity and Director of the Rights Claiming and Accountability program at the Center for Economic and Social Rights. Her work focuses on expanding strategies for evidence-based advocacy, using human rights as a tool to tackle inequality.