Fighting Inequality in One of the Nation’s Most Unequal States

The emerging statewide coalition Recovery For All is demanding progressive tax reform as a crucial step toward reducing extreme racial and economic disparities in Connecticut.

Since the start of the pandemic, Connecticut’s fourteen billionaires have seized $12.6 billion in additional wealth—while hundreds of thousands of working people across the state, especially working people of color, are suffering.

As the converging crises over the last year and a half have underscored, Connecticut has become a microcosm of the extreme racial and economic disparities in the United States. It consistently ranks as the wealthiest state here in the world’s wealthiest country. But it also ranks among the most unequal.

On a mission to end this injustice and create a more equitable state, nearly 50 labor, community, and faith organizations have formed a statewide coalition named Recovery For All. The coalition aims to unite progressive forces and reshape how Connecticut approaches the state budget: rather than perpetuate failed austerity policies that exacerbated inequalities over the last few decades, the state must actively eliminate inequalities by making dramatic investments in working-class communities and working-class communities of color in particular.

Ensuring the resources our communities need to flourish is impossible without a strong, fair, and reliable revenue stream. Recovery For All is leading a campaign for reforms that would boost revenue by taxing the wealthy and corporations, provide relief to poor and working-class residents, and fully fund vital programs and services. Similar efforts abound in states throughout the country; in nearby New York and New Jersey, allied coalitions recently won major victories. 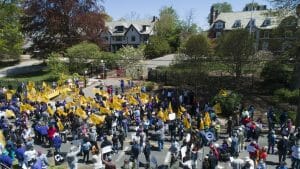 Recovery for All stages a die-in in front of the Governor’s Mansion. (Credit: Neal Thomassen)

Although Democrats maintain a state government trifecta in Connecticut, this year they have sparred with one another over progressive tax reform. Governor Ned Lamont routinely emphasizes his commitment to equity—but refuses to support tax increases on the wealthy. Challenging the governor to back up his rhetoric with action, Recovery For All has echoed an incisive catchphrase coined by State Senator Gary Winfield: “Equity Requires Revenue.” In other words, if Connecticut is serious about addressing systemic inequities, then elected officials have to repair the regressive tax structure which currently reflects and entrenches them.

Over the last six months, Recovery For All joined together with a bloc of several dozen champions inside the state legislature to make the push. At a public hearing before the Finance, Revenue, and Bonding Committee, 300 coalition members showed up to testify, sharing hours of stories illustrating why we must invest in our communities through progressive tax reform. As a result, the committee passed a package that would generate nearly $1.5 billion in new revenue by increasing taxes on the wealthy.

Outside the capitol, Recovery For All has demonstrated our key source of power: mass action in the streets. The coalition organized rallies, marches, car caravans, prayer vigils, and other mobilizations.

Some coalition affiliates amplified our vision of robust public investment by taking workplace action, like the members of SEIU 1199 New England. Thousands of long term care workers, mainly black and brown women, threatened to go on strike after sacrificing their lives to protect the most vulnerable patients during the pandemic while earning poverty wages. They averted the strike at the last minute after private employers and the state agreed to historic raises and benefit improvements as well as new measures to advance racial justice. This inspiring labor struggle highlighted why Connecticut must adopt a fair tax structure to end chronic underfunding of essential services such as nursing homes and group homes.

Although Governor Lamont is using the influx of federal funding as an excuse to oppose any tax reforms in this year’s legislative session, the stage is set for a continuing battle for the next two years and beyond.

State Senator John Fonfara, chairman of the Finance, Revenue, and Bonding Committee, delivered trenchant remarks from the floor on the last day of session.

“The status quo, the status quo budget, leaves us with status quo results,” he said. “Our policies are a knee on the neck of the Black community and other underserved communities of our state. We can do better. And we must do better.”

Recovery For All has successfully transformed the terms of debate over the state budget by making progressive tax reform the central question of the year. Now the coalition is primed to escalate the fight—all part of a long-term strategy to alter the balance of power in Connecticut and build a truly equitable society.

Puya Gerami is the campaign director at Recovery for All.

Excessive Corporate Power is a Root Cause of Migration