As Citizens United Turns 10, We Need Candidates Who Will Fight to Get Money Out of Politics

In the decade since this disastrous Supreme Court ruling, just 11 wealthy people have made 20 percent of super PAC donations.

The court, either through remarkable naivety or sheer malevolence, essentially married two terrible ideas: that “money equals speech” and that “corporations are people.” The ruling put a for sale sign on our democracy, opening up a flood of corporate, special interest, and even foreign money into our politics.

Through Citizens United and a collection of other terrible and related decisions, the Court made a bad situation worse. We saw the proliferation of super PACs, which can accept and spend unlimited amounts of money to influence elections, and the rise of dark money, which is undisclosed political spending that can come from any special interest, even foreign countries.

In the 10 years since the decision, there’s been $4.5 billion dollars in outside spending (spending from outside interest groups and not candidates for office) in elections, compared to $750 million spent in the 20 years prior to the case. From 2000-2008, there were only 15 federal races where outside spending exceeded candidate spending. In the same amount of time following Citizens United, this occurred in 126 races. Since the decision, almost half of all outside spending is dark money that has no or limited disclosure of its donors.

And that money is not coming from the farmers suffering through Donald Trump’s trade war or the fast-food workers fighting for a living wage. It’s coming from the wealthiest among us, people often with very different priorities than the majority of Americans. In fact, a full one-fifth of all super PAC donations in the past 10 years have come from just 11 people.

This has led to an unresponsive and dysfunctional government. We can’t make any progress on issues like gun safety, health care costs, or climate change. Politicians are in the pockets of their big donors. Foreign influence goes unreported and unchecked.  And we’re left with the most corrupt president in American history, who’s embroiled in a series of scandals that threaten our prosperity, safety, and security.

To name just a few of these scandals: Trump urged a foreign country to investigate his political opponents. His lawyer’s “associates” illegally funneled money into his super PAC through a sham corporation. The National Rifle Association spent tens of millions of dollars in unreported “dark” money to elect him while also serving as a Russian asset.

Trump and his accomplices should be held accountable, through Congressional impeachment, the judicial process, or both. But we must also elect new leaders who will pass real, meaningful anti-corruption reforms. 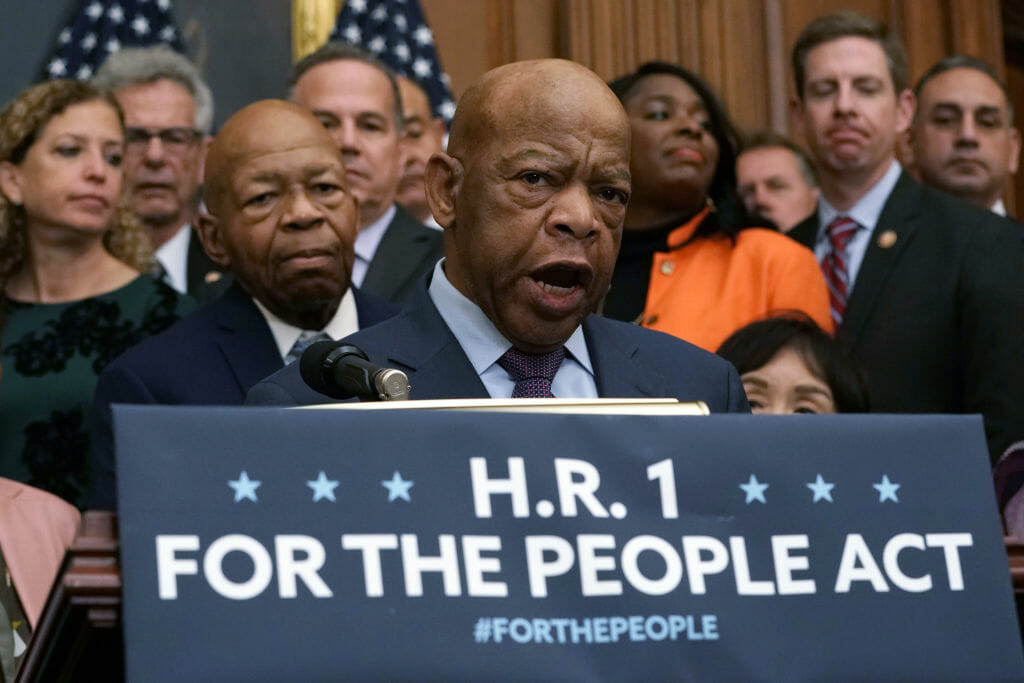 Thanks to a class of reformers elected in 2018, we’ve already begun that process. Last year, the House of Representatives passed the For the People Act (H.R. 1).

H.R. 1 would strengthen ethics rules and enforcement; reduce the influence of big money while empowering individual, small-dollar donors; and, along with a bill to restore the Voting Rights Act, protect every American’s right to vote. It also calls for a constitutional amendment to overturn Citizens United.

Sadly, this bill is being blocked by Mitch McConnell in the Senate.

These reforms are all popular with the American people. We can unrig the system and restore that faith by taking action to elect candidates who will fight for these priorities – and by pressuring elected officials to act.

That means attending town halls and asking politicians if they will make reform their top priority, signing up to volunteer for candidates who are running on this issue – and chipping in a small donation if you can. Join groups like End Citizens United or Let America Vote that are pushing back against the rigged system and standing with candidates who put people ahead of corporate special interests.

Together, we can restore trust in government, prevent corruption, strengthen our national security, and ensure Washington truly works for the people.

Tiffany Muller is the President of End Citizens United, which is dedicated to getting Big Money out of politics and fixing the rigged system in Washington, D.C. so the government works for all Americans. Follow her at @Tiffany_Muller

Progressives have been pushing Biden and Harris to limit the influence of big corporations and Wall Street in their administration.

After making the case that universal preschool is even more important under the pandemic, advocates easily won the vote by a 64-36 margin.

The president came to Iowa bragging about his jobs record, but he didn’t lift a finger when my 150-year-old plant closed.

Don’t Listen to Davos. We, the People, Have the Solutions to Inequality.

Amazon worker Rina Cummings was shocked when she learned her boss, Jeff Bezos, has seen his personal fortune grow b… https://t.co/zAHGO0xpc8