An important new bill could upend the predatory business practices of an entire industry.

Lauren Casey and her fellow organizers know a thing or two about disruption. With the California State Assembly’s recent passage of an important new bill protecting gig workers, they’re on their way to upending the predatory business practices of an entire industry. 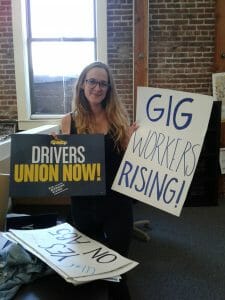 Casey is one of the lead organizers with Gig Workers Rising, which has been mobilizing drivers for Lyft and Uber for the past year. They scored a big victory when California’s Assembly passed Bill 5, a measure that clarifies and defines who may be considered an employee in the state of California.

Casey spoke to Inequality.org on September 11, the day the bill was passed, and explained why it’s such a big deal for drivers. In early days of ride-hailing, drivers were welcomed as “business partners,” but their relationship with companies like Lyft and Uber quickly went by the wayside. Fares are routinely slashed with no explanation and no means of recourse, and the commissions charged to the drivers have risen.

“As it stands now drivers are sleeping in their cars, they can’t afford to feed their families, they lack access to health care, they are the targets of discrimination every day,” Casey said, “What this bill does is it says there is an employment relationship. That means they are entitled to actually ask for things like paid time off, health care, and workers’ compensation.”

The recent victory has been several years in the making. Ride-hailing drivers have been self-organizing ever since Uber was first launched. Despite the lack of a formal “shop floor,” drivers have found one another on Facebook groups.

Over the years, some groups have tried to negotiate with the company over common problems , like the frequent ‘deactivation’ of drivers’ accounts without explanation, but with no success. In 2018, this organic movement was ripe for a more public campaign, and Working Partnerships USA launched Gig Workers Rising.

The companies pushed back. When drivers around the world called for a Day of Action on May 8 to protest ridesharing company business practices, Uber and Lyft realized they would need to wage a public relations war. They put out messages about how they would accommodate driver demands without need for legislation.

Uber and Lyft promised a pre-expense rate of $21 per hour for drivers. They said they’d set up a company ‘association’ for drivers. But at the same time, they launched a massive misinformation campaign, using their access to both drivers and riders through the app for direct lobbying. As Casey described it:

“They were sending misleading and fearmongering messages twice monthly to drivers, telling them to weigh in and say they didn’t support AB5. What does it mean for apps to be the boss telling workers to lobby against a specific bill? Is it ethical to ask them to take action in support of the corporate agenda? Some drivers might fear they will lose their account if they don’t do what the message is asking them to do. Also, on the tail end of our three day multi-city action on AB5 and a union, the companies immediately sent out messages to riders asking them to tell the legislature to ‘fix’ AB5. The following day, they said if they can’t actually come to a deal they will support a ballot initiative with a starting war chest of $90 million. They would rather put that much into a ballot fight than even think about paying their drivers a living wage.”

Uber and Lyft have ramped up their misinformation campaign and are unlikely to restrict it to California. Texas is already trying to pre-empt any effort to classify gig workers as employees. But Casey and others believe this is the moment to push for additional victories, including building pathways to unions.

Gig Workers Rising worked with other organizations throughout California, and saw a groundswell of support from other community-based groups for their efforts. Casey believes that elsewhere in the country, grassroots organizations working on related issues will be ready to come together to support gig workers, and progressive politicians may be willing to make the case for stronger protections for them. At state and local levels, concerned civic organizations should consider supporting local driver organizing efforts, and encourage state legislators to support them, as well.

Uber made its reputation and its fortune by “disrupting” the transportation industry. Yet it has gone through extraordinary legal and public relations efforts to convince lawmakers that it is not a transportation company. And Uber is continuing those efforts, arguing that driving is outside the “usual course” of its business, which would allow them to continue classifying drivers as independent contractors.

As organizers point out, Uber has also exerted extraordinary influence to undermine wages and social protection for workers, even including refusal to share driver lists with local governments. If Uber were simply a smart dispatching service, there would be no reason its fares could not be set by municipalities, that drivers could not be licensed in the same way as taxis, and that its drivers could not organize.

In reality, Uber is not just a transportation company. It’s an archetypal example of the corrosive capital that is seeking to restructure reasonably well-functioning industries to extract an ever greater share of profit for investors, by skirting legal protection and squeezing ever more from workers. The ultimate response to this model and the best protection for workers is more organizing.

Bama Athreya is an Economic Inequality Fellow with Open Society Foundations. This blog is one in a series on worker rights in the digital economy and the future of work.

Mining Financiers Bribed Their Way to Riches. Now Their Jilted Workers Have a Chance at Compensation.

We Need a Homes Guarantee. Now.