As turmoil around Brexit continues, the 1998 “Good Friday Agreement,” which concluded over 30 years of conflict in Northern Ireland, hangs in the balance.

A “hard border” between Northern Ireland and the Republic of Ireland might result from the fallout of Brexit, which could heighten tensions and has led some to ponder the likelihood of a return to scenes of violence and unrest that many assumed were consigned to the past. For many, however, the past never really went away.

Social and economic inequality in areas such as employment and housing played a key role in originating and sustaining the conflict in Northern Ireland and little has changed on that front in the communities that suffered most.

Twenty years after the peace agreement, the areas that experienced the highest number of conflict deaths (West Belfast) and second-highest (North Belfast) remain the most impoverished, even though they now sit cheek by jowl with the new Belfast campus for the University of Ulster and glittering office blocks delivered through publicly funded incentives to big business.

Suicide rates have rocketed in the years following the conflict and are now the highest in the United Kingdom, with economically deprived areas experiencing three times as many suicides as non-deprived areas. The long-term unemployment rate (percentage of the unemployed who’ve been without work for one year or more) is 63 percent, compared with 27 percent in the United Kingdom.

And despite the commitment in the Good Friday Agreement to “progressively eliminate the unemployment gap between the Protestant and Catholic communities,” the long-term unemployed remain predominantly Catholic.

As Brexit negotiations career forward to their unknown destination, the future for Northern Ireland’s labor force looks even more precarious. Due to a stand off between the leading parties over a botched and costly renewable energy initiative and the failure to deliver a long-promised Irish Language Act, Northern Ireland has been without a government since January 2017 — the longest in world history. The civil servants who have been left to run the country have stated that a no-deal Brexit will have a “profound and long-lasting impact” in Northern Ireland, and warned of a “sharp increase in unemployment.”

The economic model that underpinned the peace has failed to deliver. It is now well past its time, and this has never been highlighted more clearly than by two contrasting events which took place on March 15.

One was an international real estate conference in the upmarket French city of Cannes that had a heavy presence from Northern Ireland local officials, consulting companies, and property developers. Through a slick public relations exercise, complete with website and social media, they implored attendees to “Invest in Belfast” by selling the region as a center of innovation where “salary costs are one third lower than other major western European capitals.”

The second event was the Youth Strike 4 Climate in the center of Belfast, attended by 300 school pupils but few representatives from any of the major political parties. Instead of high-end PR materials, the student demonstrators carried homemade banners with slogans like “The Government is Fossil Fueling Our Destruction.” 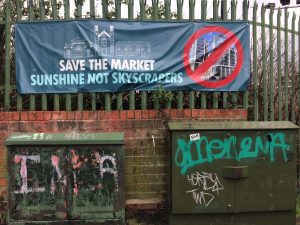 Only one of these events represents progress.

Despite the claims of “innovation,” the low-wage, low-tax model touted by the real estate conferees has utterly failed to deliver for communities impacted by conflict and chronic socio-economic deprivation. This unregulated approach now threatens the future of our young people through its reliance on rampant consumption and economic growth.

But things are changing. Northern Ireland is a small place, and has the potential to be at the top of this curve if only the political will existed.

Youth is on our side. As the “Invest In Belfast” literature proudly proclaims, Belfast is one of the youngest cities in Europe, with 43 percent of the population under 30 years old.

This fact more than any other shows that the old ways of our political representatives, of looking out for “our own” or using the rhetoric of equality without delivery, are a busted flush.

Community campaigns are flourishing across urban and rural areas – from the Sunshine Not Skyscrapers campaign in the Markets area of inner-city Belfast to environmental campaigns like Save our Sperrins against the mining conglomerates that have been given free rein to pillage and pollute our mountains. Young people are also leading the way in the vibrant work of Irish Language activists An Dream Dearg.

New ideas are being tested, including a Citizens Assembly pilot to elevate the voices of ordinary people in policy decisions. And innovative solutions exist, like using Northern Ireland’s equality legislation, an integral part of the Good Friday Agreement, to ring-fence jobs for long-term unemployed people.

For now, attention will remain fixed on the Brexit train as it trundles its unknown course. But for those with an eye to the future, one thing is clear. People in Northern Ireland are in no mood to accept spin, sales pitches, and crumbs from the table in place of a genuine say in their future. And young people are in the lead.

Nicola Browne is based in Belfast and is an Atlantic Fellow for Social and Economic Equity at the London School of Economics.