Billionaire Wealth Just Shrunk, But Coronavirus is No Great Leveler

While the world's richest have seen a dip in their stock holdings, those on the bottom of the wealth scale will bear the heaviest burden of the crisis.

At first glance, the coronavirus seems to be a great leveler, with everyone — rich and poor — seeming to be equally at risk.  Even our political leaders are not immune.  If anything, it feels like it is the relatively better off in richer countries who are bearing the brunt. But what is the actual relationship between coronavirus and inequality?

Well, the first thing to say is that so far the virus has been bad news for billionaire fortunes. As of February 29, according to Bloomberg, the world’s richest 500 people had lost $444 billion.  As stock markets have continued to fall, this figure will have got even larger since then.

Mark Zuckerberg is worth over $10 billion dollars less than he was in January. The world’s three richest people — Amazon.com Inc.’s Jeff Bezos, Microsoft Corp. co-founder Bill Gates, and LVMH Chairman Bernard Arnault — incurred the biggest losses, with their combined wealth dropping about $30 billion. The last time billionaire fortunes saw such a dip was straight after the financial crisis in 2008.

It is too early of course to predict the full impact of the coronavirus on stock markets, but we do know that after the initial negative impact of the financial crisis on billionaires their fortunes bounced back very rapidly and have more than doubled since then.  When a stock market crashes, prices of stocks are at rock bottom, meaning those who still have money to spare can snap up some serious bargains.  Mark Zuckerberg still has $62 billion to spend despite his $10 billion loss.

Beyond their stocks, the 1 percent are also heading for their specially prepared disaster bunkers in their private jets, according to some reports. The number of private jet flights from Hong Kong to Australia and North America in January jumped 214 percent, compared with the previous year, according to data from the business aviation monitoring company WingX.

It is at the other end of the spectrum, where the proportionate losses are far higher, that the impact of the virus is likely to be most keenly felt. It will be the poorest who will be hit hardest economically.  Living day to day, the poorest do not have the ability to take time off work or to stockpile provisions. 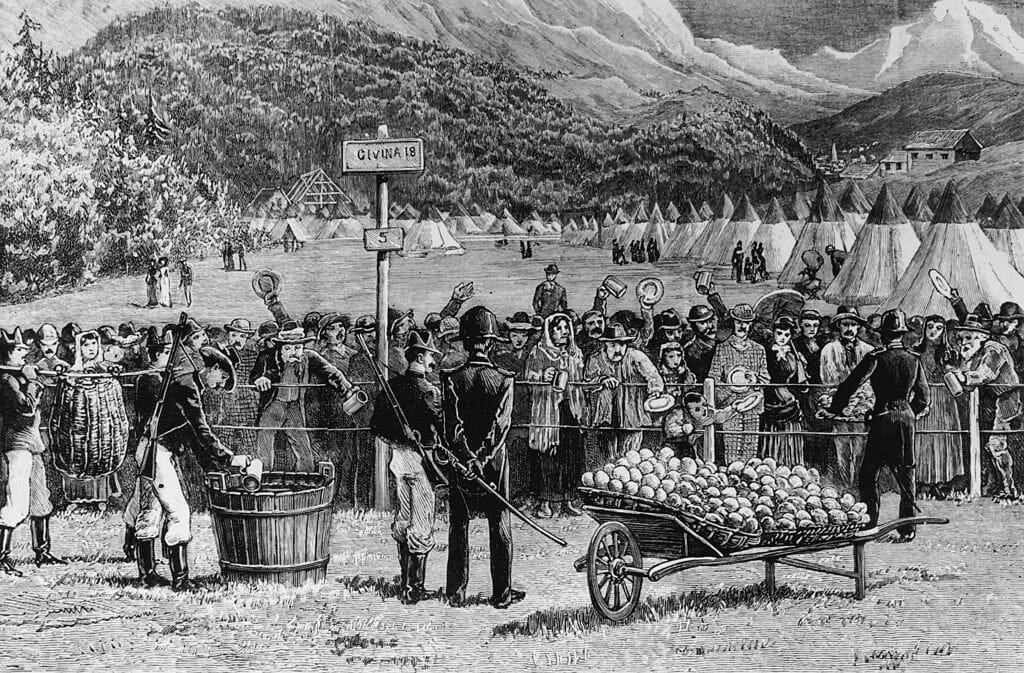 Quarantine camp on the Franco-Italian border for victims of the 1884 cholera epidemic. Elite fear of cholera was a key factor in support for big government investments in public health and sanitation in 19th century Europe. (Getty Images)

Sick pay is non-existent for the majority of humanity, and even in the richest countries, after years of attacks on labor rights and increases in self-employed precarious jobs, poor workers are simply not in an economic position to take time off. According to the Economic Policy Institute, the only 30 percent of the bottom 10 percent of wage earners in the United States have paid sick leave benefits, compared to 93 percent of the top 10 percent of earners.

Uber drivers, whether in Chicago or Cairo, have no choice but to go to work if they want to feed their families, especially if the price of food and other essentials starts to rise.  Hotel cleaners, street sweepers, delivery drivers, waiters, shop assistants, market traders, and street vendors do not have the relative luxury of being able to work from home. Migrants will be particularly impacted.

Women’s work is often amongst the most precarious and poorly paid, and women are 70 percent of the world’s health workers too, putting them on the frontline. The level of unpaid care is also likely to increase dramatically, whether it is caring for the sick or for children at home because schools are closed. The gendered impact of this virus is only beginning to become clear.

It is the poorest who are least likely to be able to access healthcare and treatment, especially in most of the world where health systems are largely based on patient’s ability to pay, rather than need. One man in Miami who’d visited China voluntarily went for a test.  Fortunately, he only had flu, but he was landed with a $3,270 bill, and his insurance will only cover half of that.

In developing countries like where I live in Kenya, where the poorest live in densely packed slums, where sick pay is non-existent and good healthcare only available to those with money, it is hard to see how governments will adequately respond to this virus once it takes hold. Poor countries will also be hit hard by the global economic downturn, facing a combined shock of both supply and demand. Even before the impact of the virus, many were planning to implement austerity measures, often in the face of unsustainable debts.

The countries that will cope best are those with the best treatment of workers and the best healthcare systems.  Mandatory sick pay has been shown to reduce rates of flu infection by as much as 40 percent.  Countries with strong public health systems and proactive governments will not only minimize the inequality of the impact of the virus but minimize its overall impact too. These are not just rich countries — countries like Thailand and Sri Lanka have very strong public healthcare systems.

We know that human knowledge and action is rarely linear but is instead driven by shocks — major historical events that have long-lasting impacts on the way we think and the way we act.

It is of course far too early to tell what the long-lasting impact of this global pandemic will be, but already it is clearly demonstrating the value of collective action and the importance of government in times of crisis. The importance of pooling risks and protecting the poorest. The importance of labor rights and public health systems. When a crisis hits suddenly elites are clamoring for more and not less government. I for one certainly hope that this is a lesson that is widely learned — and not just in terms of public health and workers rights, but also a lesson that gives impetus for equally rapid government action to prevent climate breakdown.

Again the financial crisis offers a salutary lesson here — despite the fact that we were saved from economic collapse by the prompt action of governments and trillions of dollars in public money, precious few lessons were learned and the attacks on progressive policies continued apace.  We have to fight to make sure that does not happen this time.

Perhaps this time it will be different.  A lot will depend on what lessons elites learn from this.  I am reminded of a really excellent study from 2001 about elites’ attitude about poverty reduction and collective action, especially investments in public health. The study found that in the 19th century Europe, big investments by governments in public health, housing, and sanitation were driven partly by elite fear of cholera outbreaks.  Unfortunately, the study concludes from its multiple interviews with elites in countries around the world that the richest no longer see the threat to their well-being of the ill-health of the poor. The study concludes, perhaps somewhat presciently:

“There is some element of mystery about why elites do not appear concerned that they are at risk from disease that is transmitted from the poor. This issue was never spontaneously mentioned during our interviews. One can certainly rationalize this in terms of the partial ‘conquest’ of most infectious and contagious diseases, the fact that poor country elites are vulnerable primarily to the lifestyle diseases of the rich and their access to expensive private curative medical care. Yet, on objective grounds elites should perhaps be concerned. The World Health Organization is concerned that old communicable diseases are re-emerging, some in virulent drug-resistant forms.”