The International Trade Union Confederation points to the excessive power of Amazon, Samsung, and other global firms as one factor in rising violations of worker rights.

Every year for the last five years the Global Rights Index has catalogued violations of freedom of expression, freedom of association and the right to strike, while closely following changes in legislation, whether positive or negative, for workers around the world. It also paints an annual global portrait of the ever-changing labor world in all its diversity, tracking the trends shaped by the latest political and economic developments.

The 2018 edition, published by the International Trade Union Confederation (ITUC), which represents 331 member-organizations, highlights the shrinking democratic space for workers in many of the 142 countries covered by the survey. “A number of democratic countries failed to guarantee people’s rights to organize, speak out and take action,” explains ITUC general secretary, Sharan Burrow. “As in 2017, a significant number of public protests have been either banned or severely repressed by the authorities with systematic arrests of workers and trade unionists and massive waves of dismissals as retaliatory measures.”

One example of this is Egypt where, as Egyptian journalist Deena Gamil writes for Equal Times “any form of protest — including strikes — has been systematically repressed” since President Abdel Fattah al-Sisi came to power in 2014. “Recent trade union actions are routinely carried out in a tense atmosphere,” she adds.

Egypt is one of the ten worst countries in the world for workers’ rights, together with Algeria, Bangladesh, Cambodia, Colombia, Guatemala, Kazakhstan, Philippines, Saudi Arabia and Turkey.

In Bangladesh, despite the promises made after the Rana Plaza disaster, the situation is far from decent for textile workers. In Kazakhstan, trade unionists have been arrested and unions have been dissolved by the courts, while repression is rife in Turkey too.

“The government has actively prevented 13 major strikes from taking place since the ruling party came to power in 2002, including five under a state of emergency” says Turkish journalist Çınar Kiper, who adds in his article “Out of sight, out of mind: Turkey’s invisible workers” that “the media’s lack of interest in telling labor stories is directly related to the government’s lack of interest in hearing them.” And finally, in Saudi Arabia it is the situation of migrant workers that is particularly worrying. 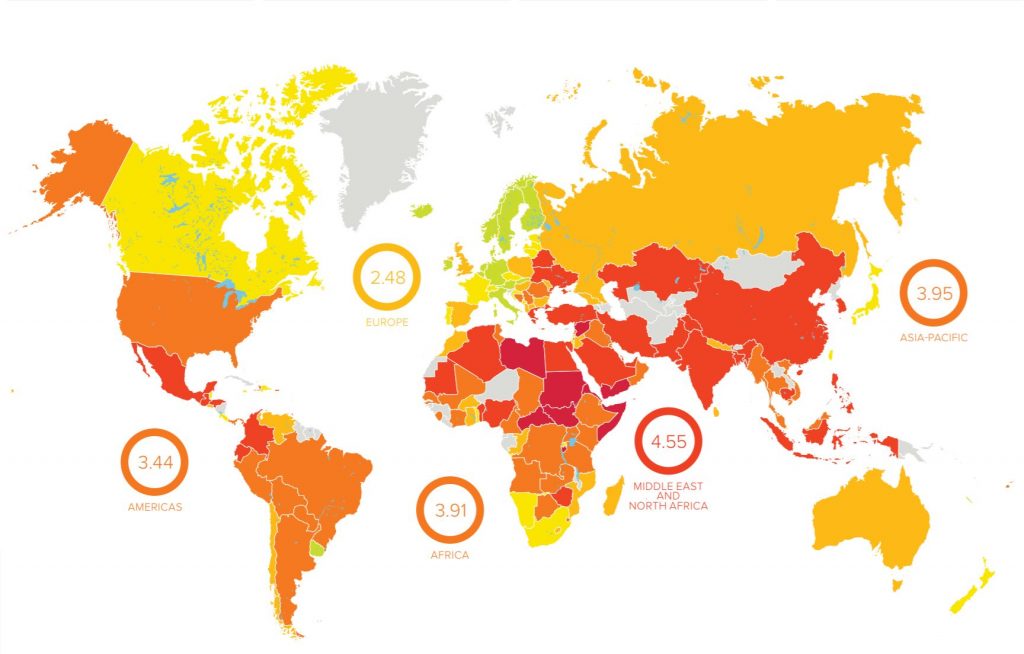 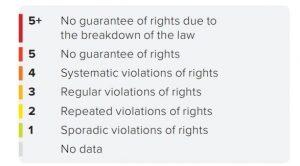 The 2018 ITUC Global Rights Index rates 142 countries on a scale from 1-5 based on the degree of respect for workers’ rights with 1 being the best rating and 5 the worst rating.

The freedom of expression of workers and their representatives and their right to demonstrate or go on strike are regularly violated by governments or employers.

“Workers’ right to strike is recognized in virtually every country in the world. The right is even enshrined in the national constitutions of some 90 countries,” notes ITUC deputy president Karl-Petter Thorwaldsson. And yet, according to the Global Rights Index, violations of the right to strike were recorded in 87 percent of the countries studied in 2017.

Anti-union practices are becoming increasingly widespread, notably by the big multinationals such as Samsung in South Korea. Collective bargaining meanwhile is becoming more and more complicated. In Europe, 58 percent of countries have not respected the conditions for exercising this right, says the report.

One disturbing development is the increase in physical violence compared to the previous survey. In many cases, the legal system struggles to bring those responsible for the violence to account. As a result, many trade unionists continue to be arrested, attacked, or even murdered, such as in Colombia.

The ITUC has established a rating system to evaluate which regions and countries are most at risk. It also highlights the cases of a few countries where the situation was particularly disturbing over the previous year, either because the political regimes have become more authoritarian (Algeria, Belarus, Egypt and Turkey) or because the governments have passed laws that undermine workers’ acquired rights such as Brazil, China and Indonesia.

The Middle East/North Africa and Asia are among the regions that have scored the worst, ranking high up the list of areas where workers are the most at risk. In addition to the countries already mentioned, such as Saudi Arabia and Egypt, countries in the grip of armed conflict, such as Syria, Yemen or Libya, are also faced with a complete denial of rights. The situation is equally difficult for Palestinians, owing to the occupation and its conflict with Israel. It is also in these countries that domestic workers’ rights are most violated, such as in the Gulf States and Lebanon.

In Iran, “independent trade unions are banned, workers in public companies have to wait months for their wages, laborers in the private sector work under precarious conditions, and if unionists demand their rights, they are silenced with an iron fist.”

In Asia, there have been numerous workers’ rights violations in the textile sector and in the supply chains. Cambodia is one of the most worrying countries in the region. In 2017, Equal Times exposed the large number of mass faintings in the country’s over-heated, polluted factories.

In African countries, workers are subjected to physical violence and trade unions still struggle to help them. Sometimes they are victims of persecution, such as in Somalia. But organizing efforts continue, such as in Uganda.

The workers’ rights survey underlines a second disturbing trend in 2018, the growing influence of big corporations and the lack of supervisory systems. “The influence of business and foreign investors in the adoption of regressive changes to labor laws was ever more visible in 2018. In many countries, tripartite social dialogue was undercut and workers’ rights were severely undermined.” says the report.

Companies such as Samsung and Amazon are singled out. In the latter’s case, whose economic model is based on the speed of its deliveries, it is a case of changing the workplace rules. “The burden of increasing productivity falls mainly on working time, and therefore on workers, whose performance is constantly monitored to find new ways of reducing production times and costs,” explains Andrea Iossa.

In Indonesia, palm oil workers have taken on a fight the food giant PepsiCo, where “workers and their families are paid illegally low wages, are exposed to dangerous pesticides and face routine abuse,” says journalist Nithin Coca.

Finally, the report recalls that many workers today have no legal protection or any means of defending themselves.

It is the case for many domestic workers, notably in the Middle East and in the Arabian peninsula, for the 2.5 billion workers in the informal economy, mainly in Asia and Africa, and for all precarious, temporary, seasonal or self-employed workers in Europe and North America.

In Europe there are nine million independent professionals who “work for clients” rather than “have a job.” The digital revolution has created an uncertain future for millions of jobs. “The ever more widespread practice of working online brings with it flexibility and independence, but also uncertainty, precariousness and a lack of labor rights,” says Esther Ortiz in an article on the fourth industrial revolution.

To end this overview on a more positive note, it is worth recalling the positive developments reported in some countries. Iceland took firm steps to close the gender pay gap, while Canada and New Zealand have introduced new laws to further protect workers’ rights.

“The challenge for governments is to govern for people, not for corporate interests, and make laws that respect international labor standards and keep open the democratic space that gives workers a voice in their community and workplaces. Without this we face an insecure and fractured world”.

This story was translated from French and originally published in Equal Times.

Mathilde Dorcadie is editor of the French version of Equal Times. For several years she worked as a correspondent for French-language media in Brazil and the Middle East. As a freelance journalist, she worked for Agence France Presse as well as various television channels, magazines and newspapers. She can be contacted at mathilde.dorcadie@equaltimes.org. Twitter : @dorcadie