Biden Administration is Cracking Down on Corporate Recidivists

The Justice Department is ramping up efforts to fight corporate crime, which is particularly bad news for repeat offenders.

For years, rogue corporations have in effect gotten away with murder through a system that allows them to avoid prosecution for serious offenses by promising to change their ways and paying affordable financial penalties.

These arrangements, widely used by the Justice Department, are known as deferred prosecution and non-prosecution agreements but they are really nothing more than leniency practices. Their supporters claim that the threat of actual prosecution in the future is sufficient to get companies to clean up their act. They also point out that the agreements have provisions requiring such changes.

Unfortunately, there are numerous examples of companies that have violated the terms of their deferred or non-prosecution agreements with apparent impunity. The Biden Justice Department is vowing to change that. Last month, Deputy Attorney General Lisa Monaco gave a speech in which she said DOJ is tightening its procedures on leniency agreements, especially for companies with “a documented history of repeated corporate wrongdoing.” She indicated that DOJ will look not only at the offense related to the agreement but the full range of misconduct.

To assist DOJ in its efforts, Public Citizen has just published a report highlighting 20 large companies with deferred prosecution and non-prosecution agreements that have histories of wrongdoing documented in the Violation Tracker database we manage at Good Jobs First. 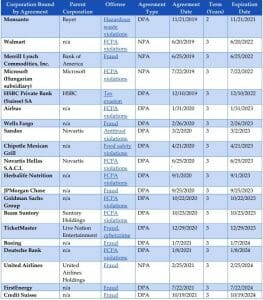 Source: Public Citizen, based on data from Duke/University of Virginia Corporate Prosecution Registry

Some of these rap sheets have continued after the company entered into its leniency agreement. For example, after signing an agreement in 2020, Wells Fargo was fined $250 million by the Office of the Comptroller of the Currency for unsound banking practices.  After signing an agreement in 2019, Merrill Lynch (owned by Bank of America) was fined several times by the Congressionally authorized industry regulator FINRA, including an $11.65 million penalty this year for overcharging customers.

After signing an agreement in 2019, Walmart has been involved in numerous violations, including a case in which it paid $20 million to the EEOC to resolve allegations of gender discrimination.

The list could go on. There are abundant examples proving that deferred prosecution and non-prosecution agreement have done little to deter corporate misconduct and that recidivism has continued to run rampant.

It is encouraging to hear the Biden Justice Department talk tough about corporate crime after years in which large corporations have enjoyed exceedingly light-handed treatment from federal prosecutors. It is especially heartening to learn that DOJ will look at the entire track record of corporations in making prosecutorial decisions. I hope that Violation Tracker will help them in their deliberations.

Selling Out Democracy for Political Influence

One year after January 6, corporations are once again filling the campaign coffers of politicians who tried to overthrow the last election.