A child walks along the wall of the North Mara Gold Mine in the Tarime District of the Mara Region of Tanzania, 2021. Credit: RAID.

You can buy a gold coin embellished with a lotus flower to symbolize purity and spiritual enlightenment from the retail outlet of a trusted refinery. It might give you confidence that the gold was responsibly sourced.

But what if, behind this motif, you saw men shot by police at a gold mine, three of them fatally? Or a schoolgirl lying dead on a road, killed by a carelessly driven mine vehicle, as police open fire on a group of four women huddled around her body at the mine’s gate? You might recoil and see the coin in a different light.

It is difficult to know with certainty where the gold in the coin originates from, but you cannot rule out that it came from the North Mara gold mine in Tanzania where these brutal incidents occurred. The mine is owned by Barrick, one of the world’s largest gold mining companies, listed in Toronto and New York.

Last week, to coincide with Human Rights Day on December 10, Mark Bristow, the man in charge at Barrick, declared, “Wherever we operate, we seek to avoid causing or contributing to human rights violations and to facilitate remedial action.” But Bristow’s fine words on remedy, it appears, do not apply to those harmed by the assaults and killings at North Mara.

Reading Barrick’s latest Human Rights Report, you could be forgiven for believing that “old grievances” have been resolved and “damaged relationships” restored. “Nowhere,” Bristow affirms in his opening letter, “is this progress more evident than at North Mara.”

Ten survivors of the brutalities, and families of those killed, are suing Barrick subsidiaries in the British courts represented by law firm Hugh James. The case doesn’t appear in Barrick’s human rights reporting. Barrick, it seems, doesn’t let the facts about ongoing claims stand in the way of good public relations. 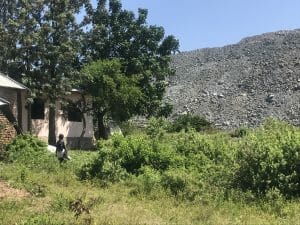 A child walks near the tailings of the North Mara Gold Mine in the Tarime District of the Mara Region of Tanzania, 2021. Credit: RAID.

For more than a decade, the Tanzanian police have been paid and equipped by the mine to guard the concession. Barrick denies that its UK-listed Acacia subsidiary was responsible for the actions of the police. According to Bristow, Barrick waived jurisdiction when the claims were filed in the UK, claiming he wanted to “make sure that these legacy issues are dealt with.”

Legal proceedings in foreign courts are lengthy, and the survivors know they face an uphill struggle against a powerful corporation, but they say they have no other alternative for justice. They remain resolute.

Victims and civil society groups say the company should have ended its relationship with the police years ago when it became clear that they were using deadly force.

A 2016 Tanzanian parliamentary inquiry into the relentless violence at the mine received reports of 65 killed and 270 injured. MiningWatch Canada and corporate watchdog RAID documented 22 killings and 69 injuries at or near the mine from 2014 to 2016 alone.

Why has it come to this? Dragging the claimants through a lengthy and costly judicial process could have been avoided if redress had been provided for the harms caused by police guarding the mine. Barrick was the majority owner of Acacia before it brought the mine back in house.

Bristow’s position on this is telling. He is regarded as “notoriously outspoken” and “an aggressive deal-maker” and is famed for his hands-on management style.

In 2018, he was instrumental in merging his previous company, Randgold Resources, with Barrick to create what was then the largest gold mining company on the planet. He became its CEO and inherited the company’s troublesome Tanzanian operations.

Soon after taking the helm, Bristow was asked about the human rights abuses at the North Mara mine. In front of a packed audience at the industry’s showcase 2019 Mining Indaba, he appeared to take responsibility:

“The historic problem of Barrick in Tanzania was that no one embraced the communities [around the mine].” He later described Acacia as “an irresponsibly-run business.” He emphasized the need to restore the mine’s social licence to operate.

It seemed a CEO had arrived who recognized the harms done and was prepared to do something about it.

But just a few months later Bristow’s response was markedly different when he was confronted by a journalist reporting on the violations at North Mara.

Three of the men in the current High Court case paid with their lives for entering the sprawling mine site of deep terraced pits and shattered spoil heaps that have literally torn up the fabric of existing communities. Looking for remnants of gold among the waste rock is an activity born out of necessity in an environment with few options for employment.

Others, like the young girl killed on a road by the mine, and the women fired on in the aftermath, are also dragged into violence that extends beyond the mine’s gates.

The survivors — families without fathers, a father without a daughter, women wounded while mourning — all  seek justice and compensation for years of harm and suffering. But not retribution. 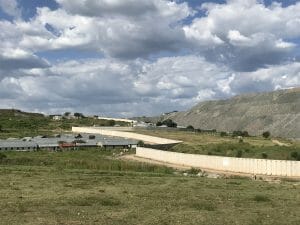 The wall erected by the North Mara Gold Mine, separating it from local communities, in the Tarime District of the Mara Region of Tanzania, 2021. Credit: RAID.

According to Barrick, in the two years since it has been in full control of North Mara under Bristow’s leadership, “there have been no new security-related human rights incidents raised to group level.” But it hasn’t published the human rights assessment it says has been carried out at the mine.

Equally troubling, the mine still uses the police to provide security and local communities continue to report persistent violence, including killings and serious beatings.

According to local communities, the company’s deeply flawed grievance mechanism where those harmed can bring complaints has been shut down without an effective replacement. Yet Barrick says such mechanisms exist and are accessible at all its sites.

The right thing to do

Bristow says he has been arguing for a long time that a good business also has to be a good citizen. Many of Barrick’s investors have a new-found appetite for strong environmental, social, and governance (ESG) credentials, reflecting growing demands from society for responsible business.

Few can doubt the extent of Bristow’s influence after a year in which a record $1.4 billion was returned to shareholders and with Barrick celebrating “getting to where we want to be.”

But seeing impoverished local communities and survivors of police killings and assaults as being out for vengeance and “retribution” is unlikely to improve either Barrick’s human rights or ESG credentials.

It is up to Bristow to decide if he truly adheres to the corporate values and social conscience he advocates, and thereby to justly treat those harmed by Barrick’s mining operations. Bristow says “recognizing and respecting human rights is simply the right thing to do.” Doing the right thing by the survivors of North Mara is long overdue.

Anneke Van Woudenberg is the Executive Director of corporate watchdog, RAID, based in the UK.

Selling Out Democracy for Political Influence