People and Planet Over Profit at the Youth Climate Strikes

Millions of young people around the world join global strike to demand climate action ahead of UN Climate Summit.

Millions of people around the world demanded an end to business as usual on September 20 by joining the biggest climate protest in history. The Friday climate strike kicked off a week of global climate action, meant to coincide with the UN Climate Summit taking place in New York.

As world leaders meet, young people — who have been the vanguard of the climate movement — are fighting to an end the systems that put profits over people and planet. The strike built upon weekly protests from students, who have been walking out of school on Fridays for more than a year to demand climate action.

While all the protests were centered on the immediate need to take on climate change, youth in different cities, from New Delhi to Kabul to Mexico City, tailored their demonstrations to connect the global need for action to their own local needs. Organizers estimate around four million people from thousands of cities around the world came out in protest.

Thousands joined the march in Washington, D.C. Audrey and Abigail, two sisters from Hampton, Virginia, carried a sign that read “Our future > another zero in your bank account.” The sisters were both galvanized by the high stakes of climate catastrophe. “I don’t want to die,” 14-year-old Audrey said. Corporate greed and the drive for profit were “100 percent” responsible for the state of the crisis, according to the sisters.

While the strikes were led by youth, people of every age were present. Some carried signs announcing that they were septuagenarians standing with striking students, while infants accompanied their protesting parents. Alvina Yeh, the executive director of the Asian Pacific American Labor Alliance, marched while holding her baby Mazie in her arms. “It’s imperative that we join because we want to make sure there’s a future for all these children, and for all the babies like Mazie.”

“It’s important for everybody to be all hands on deck as we think about the future of our planet,” said Yeh, explaining the connection between the labor and environmental movements. “We want to make sure we have a healthy planet so that we can continue to fight for worker’s rights, and for all working people.” 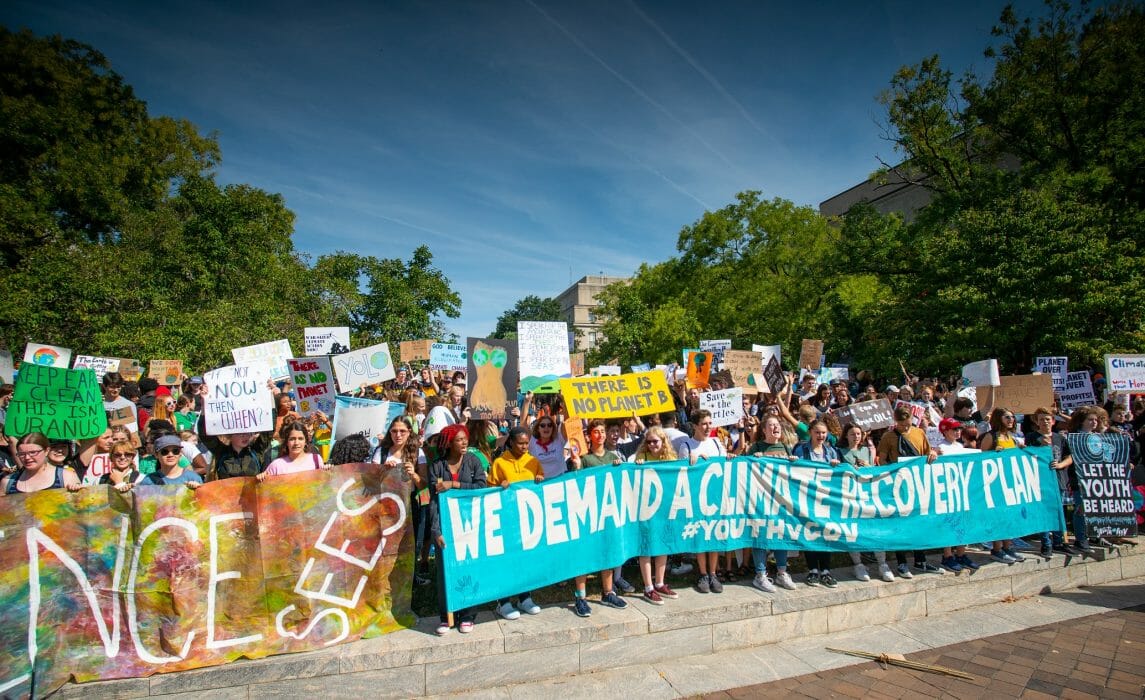 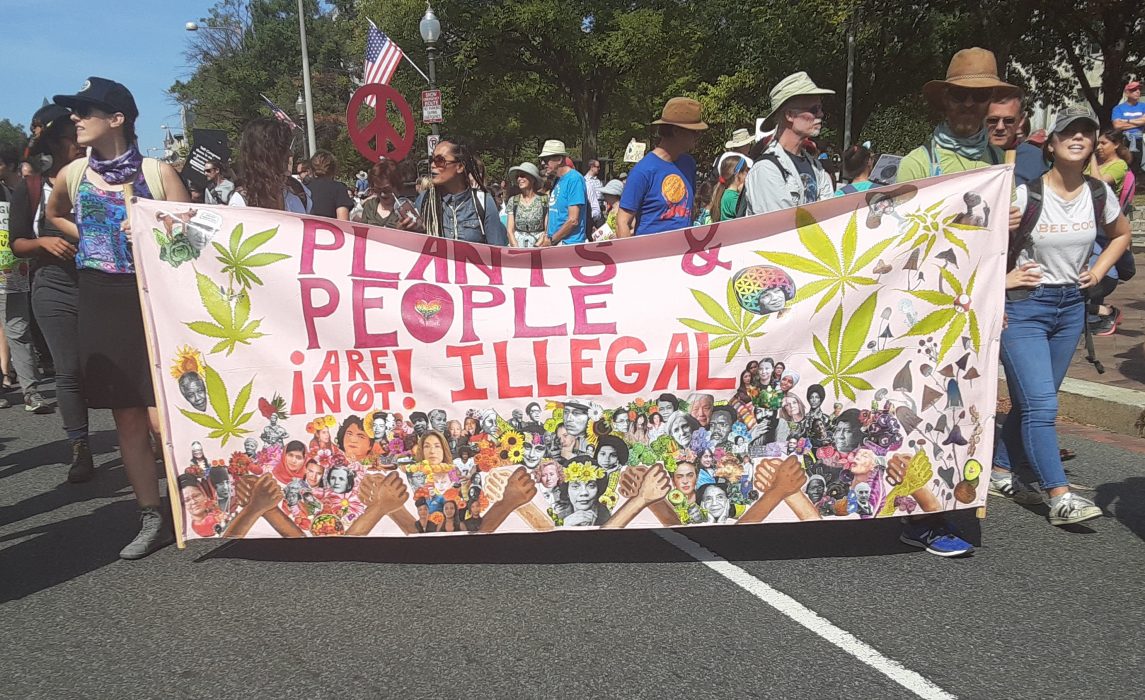 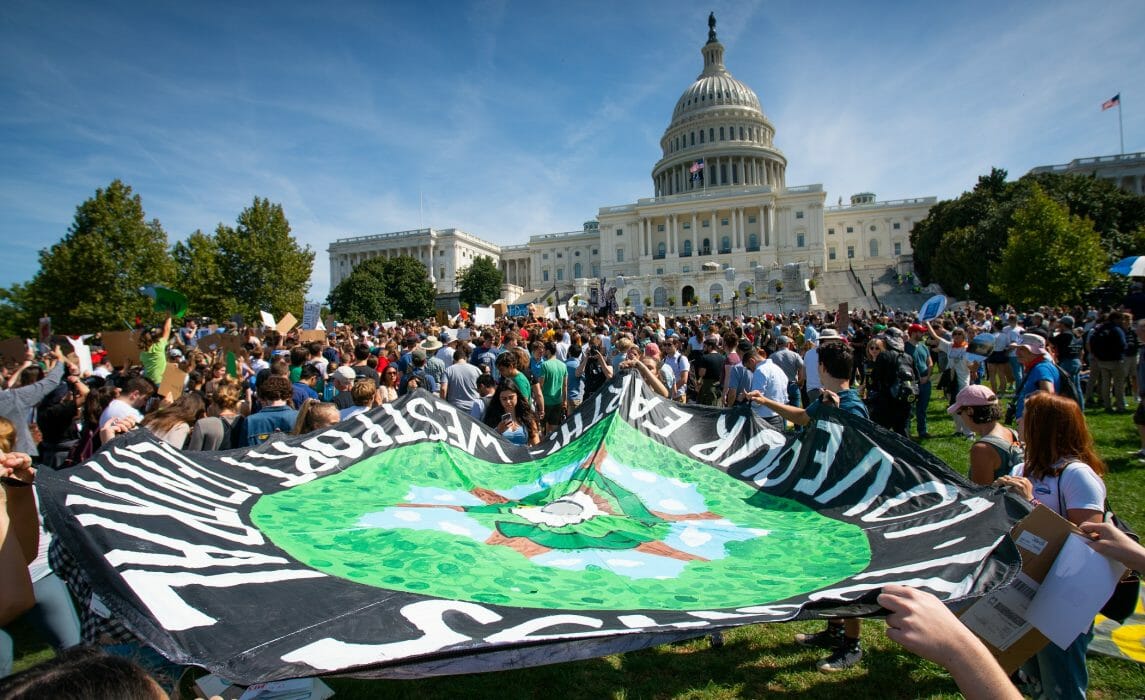 The march kicked off at John Marshall Park where youth organizers and protesters gathered to chant, sing, and play ‘Earth-inspired’ parachute and ball games. They then marched down to the Capitol for a program led by the organizers, who laid out their demands — a Green New Deal, respect of indigenous land and sovereignty, environmental justice, sustainable agriculture, and restoration of biodiversity.

The program included a concert of youth artists and performers. Musician Caroline Rose sang about the corrupting influence of money, while Claudia Sachs performed “ Future of Humanity,” the climate change anthem she composed. The program also included speeches from members of Congress, the youth plaintiffs suing the U.S. government for its failure to deal with climate change, and the indigenous people most often on the frontlines fighting environmental destruction.

“We often talk about climate change. We don’t talk about system change,” Tokata Iron Eyes, a 16-year-old member of the Standing Rock Sioux Tribe, told the crowd. “We, as indigenous people, if there’s one thing we can get across to all of you, is that what it means to be human is to be able to a part of the earth. It means listening to the inherent balances and cycles and laws that the earth has already provided.”

Nina Berglund, a Northern Cheyenne and Oglala climate organizer, came from Minnesota, where she’s been fighting to block the Enbridge Line 3 tar sands pipeline. “I want you all to take a moment and look us in the eyes — all of you congresspeople who are listening, all of you people who are able to create change. Look at us in our eyes and tell us that you’re going to do something,” Berglund told the crowd.

Negin Owliaei co-edits Inequality.org. Kelsey Hawkins-Johnson is a Landau Fellow at the Institute for Policy Studies.

The Pols — and Philosophers — Exploring Limits on Wealth

The GM Strike: A Century of Context