Whatever the outcome of the budget fight, immigrant rights advocates will continue to pressure elected officials to make good on their campaign promises for a pathway to citizenship.

Following months of sustained protests by immigrant rights advocates, the House of Representatives has finally passed its version of the Build Back Better Act, and with it, a mixed bag of relief provisions for millions of undocumented immigrants.

Missing from the legislation, which is paid for by increasing taxes on the wealthy, is a robust pathway to citizenship. President Biden initially proposed such a pathway in his initial framework of the Build Back Better agenda, which would benefit the roughly 11 million undocumented immigrants who have been living and working in the United States for decades. The Senate parliamentarian rejected that plan in September because it does not meet the budgetary requirements for it to be passed by a simple majority vote.

But House Democrats may have just found a way to solve this Rubik’s Cube of a policy puzzle.

Under the House version the bill, undocumented immigrants who arrived in the United States prior to 2011 would be formally granted “parole.” This would provide approximately 7 million people temporary protection from deportation and the ability to apply for work permits, authorization to travel outside of the United States, and driver’s licenses. The House bill would also ease the massive backlog of green cards for permanent residents already on a path to citizenship. Due to pandemic and bureaucratic delays, there are roughly 400,000 green cards that have been stuck in red tape. These would become eligible for “recapture.”

While far from a full path to citizenship, immigration allies in Congress laud the passage of these provisions in the Build Back Better Act as a necessary first step towards protecting and recognizing immigrant workers for the essential roles they play in our economy. According to the Center for Law and Social Policy (CLASP), 69 percent of all immigrant and undocumented workers are employed among the 55 million workers in essential industries, including caregiving, grocery stores, agriculture, and construction. A pathway to recovery for this essential workforce means a pathway to recovery for the nation as a whole.

“The immigration provisions in The Build Back Better Act will accelerate our economic recovery and protect the millions of undocumented immigrants that have lived, worked, and contributed to American society for decades,” said Rep. Joaquin Castro (D-TX) in a statement. “They are entrepreneurs, innovators, consumers, essential workers, and much more — who power our economy and create employment opportunities for all Americans.”

Guillermo Garcia, an undocumented farm worker originally from El Salvador and proud United Farm Worker leader, is just one of the 7 million undocumented immigrants who would become eligible for temporary work permits and protection from deportation under the House version of the bill. 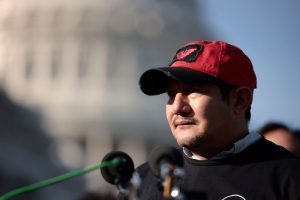 “For two decades, I have worked as a farmworker harvesting food for the nation and for many of us,” Garcia said at a recent event with Rep. Castro and others. “A work and travel permit means having the security of working without fear and traveling to our native country and being able to return.”

“If Build Back Better passes with immigration protections and benefits, I could obtain a work permit and live with more security and relief — things I have lacked during this pandemic,” added Amparo Gonsalez de Portillo, a domestic worker from Virginia and National Domestic Workers Alliance member.

Immigration relief for essential workers has never been more popular. New polling from Data for Progress suggests that 75 percent of likely voters support the immigration provisions outlined in the House version of the Build Back Better Act. But popular as these policies are, they are likely on the chopping block, facing opposition from either Sen. Joe Manchin (D-WV) or outright rejection from the Senate parliamentarian yet again.Whatever the outcome, immigrant rights advocates will continue to take to the streets and pressure their elected officials to make good on their campaign promises for a pathway to citizenship.

What’s That ‘Surtax’ Doing in Build Back Better?