Who is Buying Seattle? The Perils of the Luxury Real Estate Boom

A snapshot of luxury condominiums and their ownership and occupancy trends offers a preliminary peek at the challenges posed by Seattle’s luxury boom.

Seattle is experiencing a luxury real estate boom, with thousands of new luxury residential and rental units in different stages of development. A decade from now, Seattle’s skyline and population demographics will be fundamentally altered by decisions being made today.

This boom does have benefits, providing jobs in the building trades and increasing property tax revenue for the city. But the boom poses numerous perils for a city like Seattle and is not helping address Seattle’s acute affordable housing crisis. This report encourages policy makers to look beyond the promotional hype and ask critical questions about the disruptive impact of Seattle’s luxury real estate boom.

These challenges are not unique to Seattle.  In fact, the city’s existing affordable housing problem is being supercharged by global capital seeking a stable and safe haven.  These are not investors looking for a home, but to use Seattle real estate as a “wealth storage unit.”  This problem is much worse in cities like New York, Boston, Vancouver and San Francisco, but Seattle is attractive and not immune from these trends.

Who is Buying Seattle

The Perils of the Luxury Real Estate Boom for Seattle

This report takes a preliminary peek at the challenges posed by Seattle’s luxury boom by looking at a snapshot of luxury condominiums and their ownership and occupancy trends. We look at eight fully sold luxury buildings to see what we can learn.  From this, we encourage the city and policymakers to monitor the thousands of new luxury units in the pipeline and consider increased transparency requirements around ownership. We identified, for example, five new luxury-building projects with 1,664 units in development, most coming on market at much higher prices. 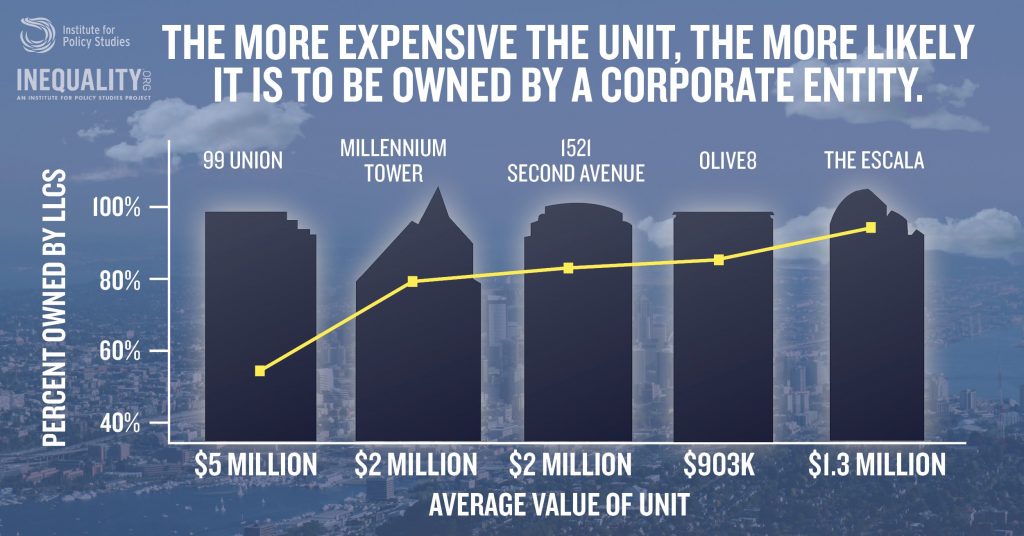 Tell Your City Councilor to

With thousands of new luxury units either under construction or seeking permits, city officials ought to be seriously exploring the perils these units pose. Among the negative impacts the luxury boom invites:

Higher Land and Housing Costs. The luxury building boom is driving up the cost of land in central neighborhoods, with a ripple impact on the cost of housing throughout the city and into surrounding municipalities. Affluent, but not superrich, households in Seattle find themselves pushed to outer neighborhoods, increasing competition for scarce affordable and moderately priced housing.

Wealth Storage and Phantom Capital. Luxury real estate is a form of anonymous wealth storage and exposes the city to criminal activity ranging from international money laundering to tax avoidance. The increase in cash sales and anonymous property ownership is a “red flag” of potential criminal activity. Because of this, King County was added in November 2018 to the Treasury Department’s Financial Crimes Enforcement Network (FinCEN) watchlist. Cash transactions, LLC ownership, and EB-5 fraud mark Seattle are both the result of and further facilitate Seattle’s inflated housing market.

Greening Luxury. The City has made admirable efforts on setting and achieving climate goals. But when it comes to buildings, this often takes the form of positive incentives for the most profitable developers. This represents a lost opportunity to simply increase standards and use those positive incentives subsidize less-profitable green affordable housing programs.

An Unequal Immigration Welcome Mat. Destitute asylum seekers fleeing persecution and danger are currently facing family separation and deportation. But wealthy foreign investors are buying their citizenship through the EB-5 visa program by investing in luxury properties such as the $440 million “Fifth & Columbia”, or the $190 million “Potala Tower.” EB-5 recipients receive a two-year green card and a pathway to apply for full citizenship in exchange for their cash.  Nationally, the EB-5 program is notorious for its opacity as well as fraud and abuse, and this is no different in Seattle. Lobsang Dargey’s $24 million EB-5 fraud case is just one example of many abuses in Seattle wrought by a broken EB-5 visa program.

Neighborhood Apartheid. Seattle’s luxury buildings function as vertical gated communities, walling off their residents from surrounding neighborhoods and communities. Developers are even constructing privatized recreation facilities. As one Architectural Digest article about luxury buildings put it: “Who Needs a Neighborhood When You Can Have These Wild Amenities?” Seattle’s luxury condos openly advertise themselves in this way. One development, “Nexus,” even bills itself as a “vertically integrated neighborhood.”

A More Vulnerable Future. If the luxury real estate market crashes, will the people of Seattle be stuck holding the bag? After the bubble of 2008, cranes stopped in mid-air for years in luxury housing havens like New York City.  What will be the impact on Seattle in the event of a global slowdown or depression in real estate? What will happen with these dozens of behemoth buildings that require extraordinary amounts of energy and maintenance?  Seattle taxpayers may end up subsidizing luxury white elephants long after the developers, with profits already in their pockets, have walked away. 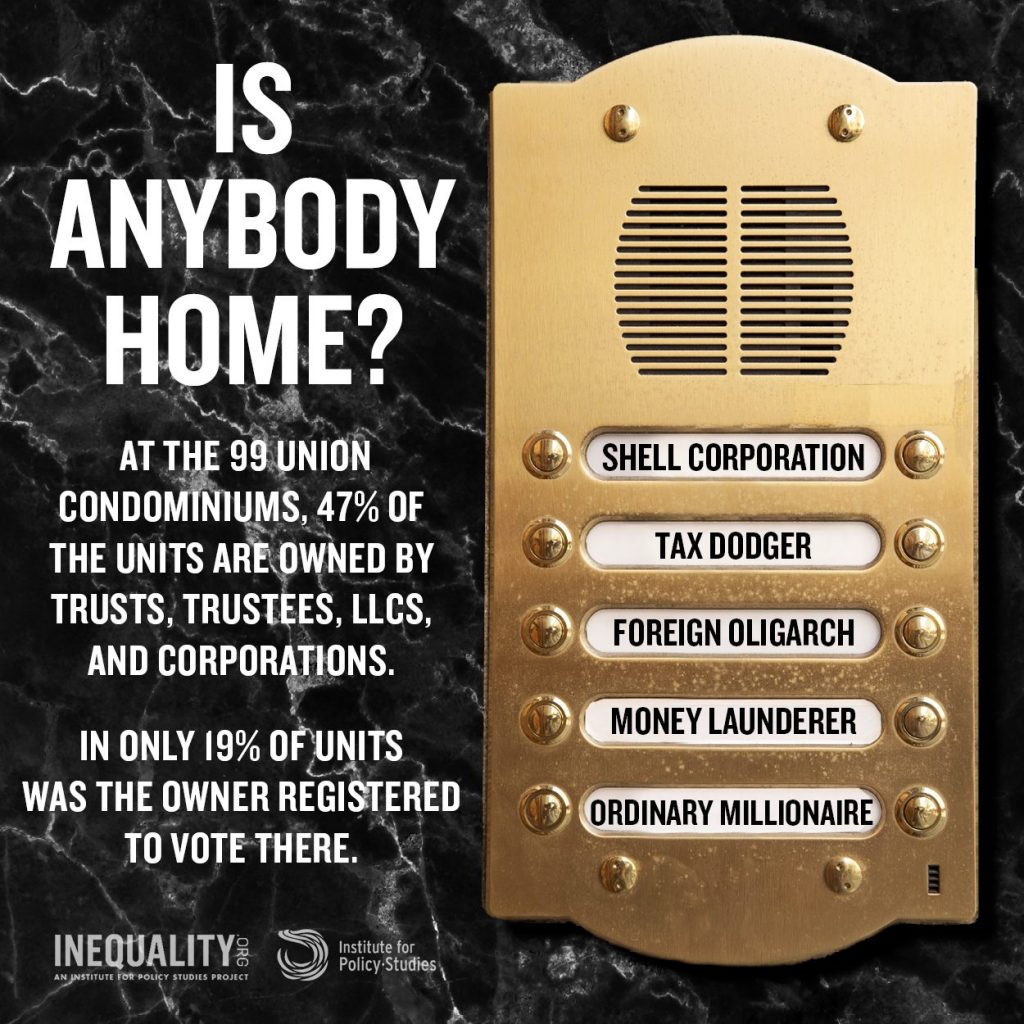 We urge the City of Seattle to monitor luxury housing activities. This report provides a window into several existing buildings.  But the city should monitor the thousands of new units coming on the market and analyze their ownership patterns. 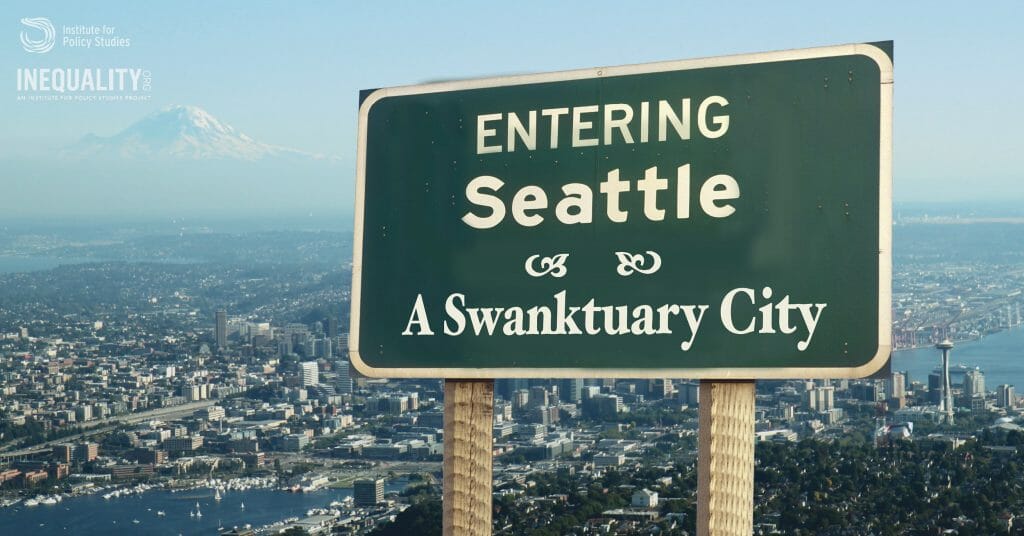 Can an Economic Stat Help Narrow Our Grand Economic Divide?