According to an analysis by the Institute for Policy Studies/Inequality.org (IPS) and the Americans for Tax Fairness (ATF), America’s billionaires alone would have paid about $114 billion in wealth taxes in 2020 if the wealth tax had been in effect. The top 15 billionaires would have paid $40 billion, had the tax been in place.  See the Americans for Tax Fairness special resource page to support the Wealth Tax.

Over the next ten years, U.S. billionaires would pay an estimated $1.4 trillion of the over a third of the estimated $3 trillion in new revenue that would be raised by the wealth tax.

Under the Warren-Jayapal-Boyle legislation, the wealth tax would only be levied on people with wealth over $50 million, roughly 100,000 taxpayers.  The annual tax rate would be just two cents on the dollar (2 percent) for people with wealth between $50 million and $1 billion and just three cents on the dollar (a total of 3 percent) for wealth above $1 billion threshold. There are only about 650 billionaires in the country that would pay the 3 percent rate.

Over the last year, IPS Inequality.org and ATF have analyzed the growth of billionaire wealth during the pandemic, starting with the IPS April 2020 report, Billionaire Bonanza: Wealth Windfalls, Tumbling Taxes, and Pandemic Profiteers.

Based on our joint ATF-IPS analysis, the combined wealth of U.S. billionaires now exceeds 4.2 trillion.   In the 11 months since the start of pandemic lockdowns, total US billionaire wealth has increased $1.3 trillion, or 44 percent.

Get the latest updates to billionaire wealth

Over these same eleven months, 73 million Americans lost jobs, 25 million caught the coronavirus and half a million died from it. Billionaire wealth is up 18-fold over the past 30 years—from $240 billion in 1990 to $4.2 trillion today, according to Forbes data.

March 18 is used as the unofficial beginning of the pandemic because by then most federal and state economic restrictions responding to the virus were in place. March 18 was also the date that Forbes picked to measure billionaire wealth for the 2020 edition of its annual billionaires report, which provided a baseline that ATF and IPS compare periodically with real-time data from the Forbes website. PolitiFact has favorably reviewed this methodology.

Based on Forbes data, total billionaire fortunes ballooned from an inflation-adjusted total of $1.6 trillion in 2010 to $4.1 trillion at the end of 2020—a 150% increase, or an average annual hike of 15%. Our analysis of the effects of the Ultra-Millionaire Tax Act uses a much more conservative growth estimate used by economists Emmanuel Saez and Gabriel Zucman, who estimated the total revenue raised by the Ultra-Millionaire Tax Act. The 10-year revenue estimate assumes taxable wealth will grow at about 4% per year, which are standard assumptions used by the Congressional Budget Office and the Joint Committee on Taxation. 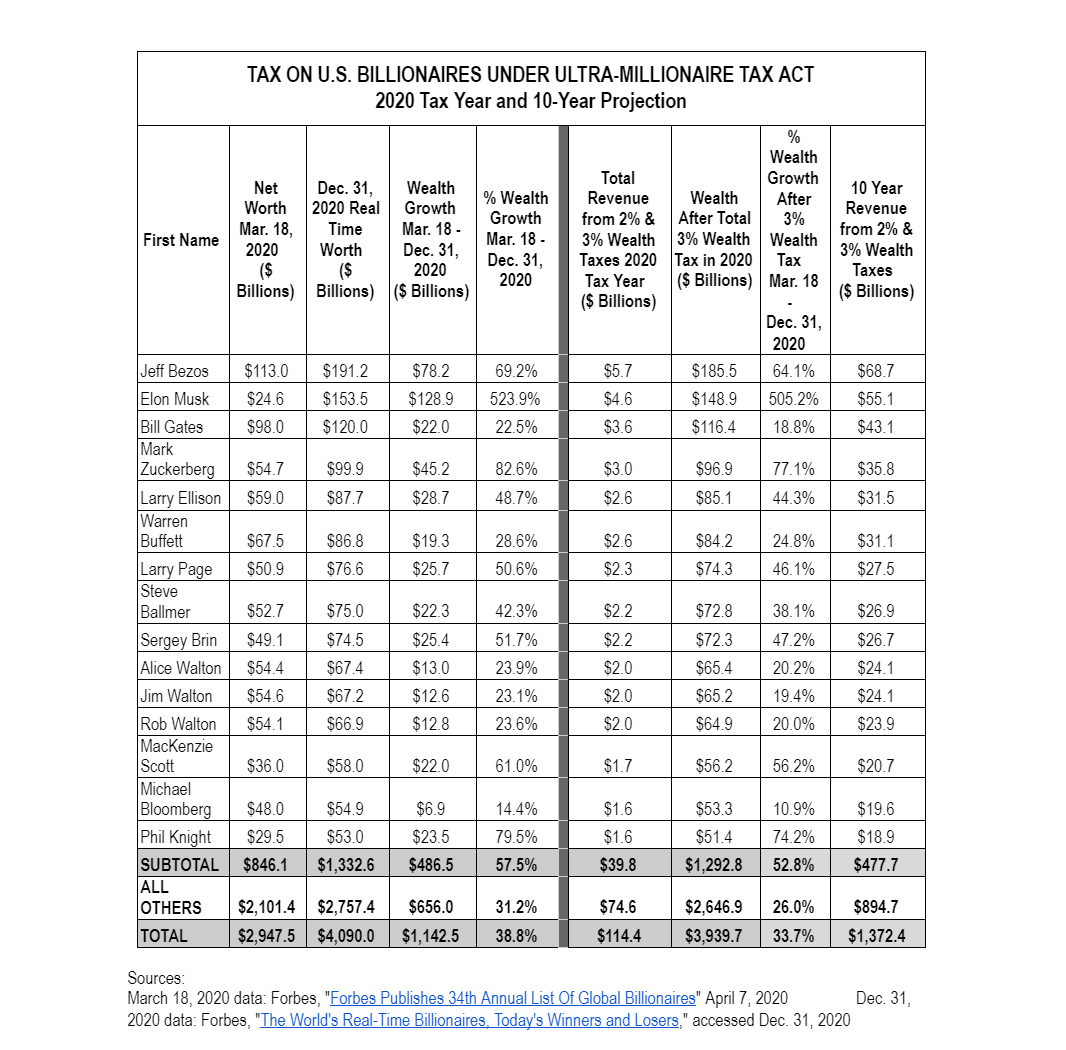