On December 6, the D.C. Council unanimously approved a Domestic Workers Bill of Rights, extending crucial recognition and labor protections to thousands of domestic workers. The legislation is expected to pass its final vote on December 20. I spoke with Erica Sklar, the National Organizer for the Hand in Hand: The Domestic Employers Network, who advocated alongside the winning coalition. 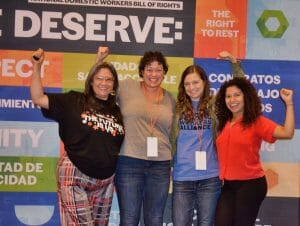 What does the recent vote on the Domestic Workers Bill of Rights mean for the people of D.C.?

Nearly 10,000 domestic workers who are caring for people in homes across the District will finally benefit from clear policy that protects their rights and dignity. Employers who already want to do the right thing won’t have to rely on their best guess as to what the right thing is – they’ll have memorialized policy and guidance.

The bill includes a written contract, so the city will have to create a contract template which is helpful for employers to make critical hiring and retention decisions. And workers will finally know their rights, have them written down, and know their expectations at work.

This is a big win for our human dignity. The policy expressly includes instead of expressly prohibiting the basic rights to domestic workers that were all holdovers from slavery – for example, the human rights code in D.C. excepts “domestic servants” from employment protections. Domestic workers, almost all of whom are women and mostly women of color, are explicitly left out by law in most places in the country. That changes now.

It passed its first vote! The #DCDomesticWorkersBillofRights is one step closer to becoming law because of the women of color who advocated and organized around this bill.

Stay tuned for the final vote on Dec. 20th! pic.twitter.com/jz8Fmd9xrj

What impact might the bill’s passage make on the rest of the country?

Washington follows two other cities – Seattle and Philadelphia – and ten states in passing policy that protects domestic workers. A national Bill of Rights had its first hearing in Congress this year, but it’s going to be a longer road to see that through.

These policies are long overdue and the more places that are advancing these policies, the more other states can look to them as a model, to know that these protections are achievable and powerful for workers, employers and allies.

Congress' first hearing on a national Bill of Rights

What misconceptions about your work or this bill do you often find yourself debunking?

Hand in Hand’s model is to work with employers in coalition with domestic workers, living our core value of interdependence. Employers are right there alongside workers: testifying, rallying, celebrating, and sitting in chambers for hours.

Domestic employers are a mixed class group of people who frequently get more attention from legislators than domestic workers might, which is an injustice and a reality that we can harness.

Legislators across the country frequently say that they like these policies, but they worry they’ll be a burden on individuals and employers. We really complicate that by having an employer standing there saying: “No, I want this. This will benefit me.”

Detractors also love to say that this legislation is meant to make employment difficult. But what’s really difficult is when you have a baby, and want to hire someone, and there’s no information available to you. Or when a relative gets into a terrible car accident, and you have to hire at-home care, and the only option is to post on Facebook: “Where can I hire someone and how much should I pay them?”

For employers, finding good, reputable information and hiring people who want to stay in the job is really difficult. And until these jobs are really good jobs, worker shortages and retention problems for home care workers will continue. There’s huge motivation for employers to support this kind of legislation and they do.

Could you share an anecdote from this process that really moved you? A moment in which you felt the meaning of your work?

The willingness of employers and especially workers to share their most personal and vulnerable stories on behalf of so many other workers for whom it’s not safe to show up is incredible. Recognizing how much time people have taken out of their lives to support these policies, partially for themselves but also because others in their communities aren’t able to be there, is such a gift that frequently goes unnoticed.

I was really inspired to hear some of the District Council’s members talking about their own family members. Councilmember Robert White recounted going to work with his mom, who was a house cleaner, and Councilmember Janeese Lewis George said she felt that her great grandmother would be proud of her city that day.

We’ve been pretty tenacious over the years to ensure lawmakers like them see and hear from us – and they sure do. Our stories are resonating with them and they’re recognizing their role to respond to our demands. It was satisfying to hear that reflected back at us on the day of their vote.

Inequality and the Care Economy

What else have you learned in the advocacy process?

We need to make the political process as accessible as possible – in terms of language and physical access. We need to ensure appropriate interpretation so that we really can understand each other. In New Jersey, some of the chairs of committees asked for Spanish-speakers to read translations, which didn’t allow workers to fully testify.

And so many places, especially state houses, are absolutely inaccessible for people who use wheelchairs. They value the history of the building over the ability for people to use the building to advocate, and that’s shameful. Inaccessibility impacts what’s possible in the halls of government – we need to make sure that everyone can participate.

How Colombia Will Tax the Wealthy