Swifties, Welcome to the Anti-Monopoly Movement

Taylor Swift fans had their time wasted and pockets emptied by Ticketmaster. Now they’re calling to break up the company’s live events monopoly – and joining the movement to crack down on monopolies, period.

The anti-monopoly movement is having a moment. Gone are the days of associating evil market dominance with Standard Oil or Carnegie Steel, Bill Gates’ petulance during deposition, or how it feels to desperately mortgage Marvin Gardens because you landed at the hotel on Park Place.

As now-Federal Trade Commission (FTC) chair Lina Khan asserted five years ago in her seminal work, “Amazon’s Antitrust Paradox,” our government’s outdated enforcement standards “fail[ed] to register” monopolistic harm. Since then, millions more Americans have been awakened to the sinister power of monopolies in our economy – and the exciting political opportunities to rein them in.

Last week, legions of new anti-monopolists were born. They have enormous potential to change the game: shrewd social media skills, undying loyalty, and encyclopedic knowledge. They’re Taylor Swift’s superfans – and they just might be the reason that the government breaks up Ticketmaster.

The Swifties – as Swift’s stans are affectionately nicknamed – experienced the destructive power of the live event and ticketing monopoly firsthand. Hoping to procure pre-sale tickets to their favorite pop star’s upcoming tour, millions of fans waited in endless e-queues, only to be hit with sky-high ticket prices and exorbitant fees – if they were able to snag a ticket at all.

“Ticket prices may fluctuate, upon demand, at any time,” read an ominous warning on the Ticketmaster website. And they did: Due to their “dynamic pricing” system, which vaults ticket costs to a maximum market rate, fans reported buying tickets for thousands upon thousands of dollars, not including hefty fees, and prices spiked even higher on the secondary resale market. On StubHub, for example, ticket listings reached upwards of $95,000.

Finally, Ticketmaster threw in the towel and canceled subsequent presale windows. Their site crashed thousands of times. It was absolute mayhem – and fans had no other option but to endure it, the kind of undignified customer experience caused only by an unchecked monopoly.

Ultimately, the Swifties got results.

Hours after Taylor Swift released a statement, apologizing to the fans for the bungled presale and chastising Ticketmaster for incapably handling demand, the Department of Justice (DOJ) announced it has launched an investigation of Live Nation Entertainment’s abuse of market power. While their work wasn’t prompted by Swift, reported David McCabe and Ben Sisario in the New York Times, Swifties’ wave of discontent was overwhelming enough to warrant the Department’s public disclosure. Immediately, the company bragging about a record-smashing 2022 (“benefitting” from “fee bearing tickets”) saw its stock plummet. 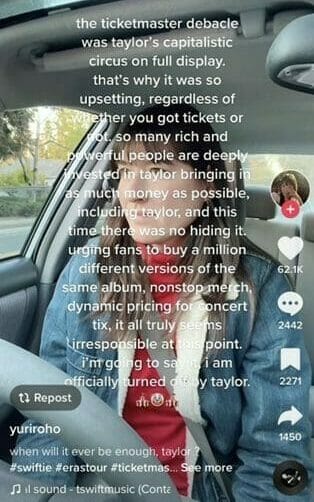 How did we get here? When it comes to antitrust issues, the American government has essentially been asleep at the wheel, allowing Ticketmaster’s monopoly to crush its competition for over a decade.

In 2010, the two entities merged into Live Nation Entertainment to suppress their rivalry – a process waved through by the Obama administration’s consolidation-friendly Department of Justice. The company was subject to a relatively weak consent decree, which asked the merged companies to not use their live venue dominance to expand their ticketing capacity. But it’s been easy to intimidate their naysayers and flout guidelines ever since.

Put simply, the merger created a monster, subordinating all parties in the live event life cycle from ticket acquisition to performance.

“Ticketmaster bullies venues into not working with their competitors,” concluded Doctorow. “They bully smaller artists by denying them management. They bully big artists by controlling their ticket prices and letting their fans down. And they bully their customers into paying exorbitant prices for tickets, not only by enabling resellers but by collecting massive fees on every ticket those resellers sell.”

Even Swift, an aspiring billionaire and private jet power-user, has no choice but to bend the knee to the ticketing monopoly, often an exclusive partner at her massive preferred venues.

Their scam fees now cost as much as 78% of a ticket. They control the events, the venues, even the artists.

There’s a movement pushing the Justice Department to take on their monopoly. @Doctorow breaks it down. pic.twitter.com/Ai0AwuVJQX

Greg Maffei, chairman of the monopoly’s parent group – and head of Liberty Media, a media conglomerate with Republican ties – blamed the service’s lag time on Taylor’s popularity. “Ticketmaster will twist any situation to protect its market power over live events,” noted the American Economic Liberties Project. (It’s time to mention that Maffei took home $47 million from Liberty Media in 2021, and is personally worth hundreds of millions like Swift herself.)

Soaring ticket prices are not entirely the artist’s fault for their popularity. Even as Taylor Swift’s music is of the money-printing, monocultural variety – incentivizing “dynamic pricing” to the highest degree – she’s still a worker, exploited by and beholden to an overarching system. As Live Nation and Ticketmaster can force artists to work with them and make a killing on their sale and resale fees, less popular or well resourced artists are uniquely harmed by the business model without other streams of income.

“Corporations are extracting the maximum capital from artists’ labor, and they’re not sharing it anymore,” said Doctorow.

Ticketmaster’s unsustainable market dominance has long been understood. Well before the Taylor Swift fiasco, a coalition of research organizations and artists collectives launched the Break Up Ticketmaster campaign – asking the DOJ to “investigate and unwind” the live events monopoly. The campaign quickly gained ground, generating tens of thousands of signatures on an advocacy letter.

Pro-breakup legislators also harnessed the news cycle, calling on the Department of Justice to investigate the abusive ticketing monopoly.

And on MSNBC, Senate Antitrust Committee chair Amy Klobuchar (D-MN) promised a Senate hearing on Ticketmaster’s market power and insufficient consent decree in the coming year. She expressed political interest in “put[ting] the Taylor Swift fans right on antitrust,” as their ticketing experience was “a story of a monopoly gone wild.” Her bills with Senators Chuck Grassley (R-IA) and Mike Lee (R-UT) aim to facilitate antitrust enforcement with new filing, funding, and state empowerment rules.

State lawmakers, too, seized the opportunity to criticize consolidation. After all, Swifties are spread across the country and party lines. The Attorney General of Tennessee – home to the “angriest Swifties” – opened an investigation into Ticketmaster’s misconduct. And in New York, state Senator Mike Gianaris called attention to his 21st Century Anti-Trust Act, which would “hold [Ticketmaster] accountable for manipulating the ticket market to bleed concert-goers.”

For his part, President Biden recently directed his administration to “reduce or eliminate” junk fees like Ticketmasters’ infamous extra charges, which sometimes total up to 78 percent of the cost of a ticket. And he’s appointed a passel of pioneering antitrust enforcers – like New Brandeisian icon and FTC chair Lina Khan, DOJ Antitrust lead Jonathan Kanter, and former economic advisor Tim Wu – who are dedicated to bucking Robert Bork’s inert “consumer welfare standard,” overhauling the state’s merger guidelines, and appropriately disciplining monopolistic harm in the contemporary economy. Biden also signed a robust competition-oriented executive order in his first months in the Oval Office. 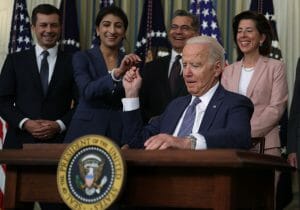 The President’s paradigm shift comes not a moment too soon. Monopolies aren’t just disfiguring our economy or our political processes. They are capable of stripping everything for parts – even our arts and culture, cornerstones of democratic society that should be unequivocally protected from the incursions of greedy corporations.

Swifties understand this. And they experience the villainy of monopolies across the board – through the high price of a tight seat on a plane home from college, in the improbability of a solid career in journalism, in their skyrocketing monthly rent, or in the marginalization of their small e-commerce business.

So, present day monopolists, steel yourselves and remember: When you provoke a superfan, they’ll come for you.

Swifties, Welcome to the Anti-Monopoly Movement

Taylor Swift fans had their time wasted and pockets emptied by Ticketmaster. Now they’re calling to break up the company’s live events monopoly – and joining the movement to crack down on monopolies, period.