A California campaign is pushing to add an innovative initiative to the November ballot. The plan: make public higher education tuition-free by restoring the estate tax.

Angad Singh Bhalla holds his son, Nanak, in his arms while juggling phone calls at all hours of the day.  He is the coordinator of newly formed California College for All campaign. A filmmaker and labor activist, Bhalla has jumped into this campaign with gusto.

For Bhalla, this is more than a movement to make college more accessible. “I was inspired by thousands of young people that turned out for the Sanders campaign.  I’ve been involved in other campaigns before but I’d never seen anything like it.”

“I thought, ‘We should engage these people.’  Things are in motion.  We may not have a movement yet, but this is the way.” 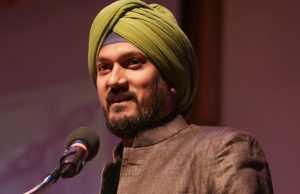 The state-level College for All campaign is now going into the field, collecting signatures to put the initiative on the ballot for November 2018. The initiative would increase student aid funding at California public colleges and universities by restoring a dedicated tax on estates over $3.5 million.

If approved by California voters in November, it would dramatically increase investment in public higher education while reducing the concentration of wealth and power.

In the last 20 years, the cost of college has gone up over 300 percent at the University of California and within the state university system.  Community college is still relatively expensive.  They were all virtually tuition-free in the 1970s.

“One lesson from the 2016 campaign is you can only go so far saying “our opponent is a monster,” said Bhalla.  “You need to have a compelling vision.  I think this issue — college debt and tuition — will mobilize young voters and boost turnout for 2018.  By putting something bold and exciting on the ballot you will pull young people out and have all sorts of impacts. “

“I think it is strategic to pay for ‘college for all’ with an estate tax.  The initiative will levy a tax on the richest 0.2 percent of Californians, about 4,000 multi-millionaires and billionaires, and would assist 2.6 million students.”

This campaign is a California trend worth catching

As part of the Republican tax cut pushed through at the federal level, the wealth threshold of the federal estate tax was doubled for a family from $11 million to $22 million.

“By restoring the California estate tax, we are capturing some of this lost revenue and directing it to something that changes lives in our state,” said Bhalla.  “The estate tax is a fundamentally fair tax.  Why should someone be born with so much unlimited wealth at a time when social opportunity is declining for the large masses of people?

“Education is the ultimate equalizer in terms of the theory of opportunity.  Yet we have some people born wealthy and others who are born with very little.  We looked at other revenue forms, but this seemed the most fair. If we are able to get on the ballot, I think we will triumph.  But we have to get on the ballot.”

Now they are pushing to get the signatures on the ballot.  They need to collect 585,407 signatures before April 24th.  Know anyone who wants to volunteer or contribute?  Check out www.collegeforallca.com.

Moderates and progressives converge on Capitol Hill to support a targeted tax multi-millionaires.

The Ways and Means Committee plan would make a down payment on much-needed public investments but doesn't go far enough to address wealth inequality.

The Big Pharma Family that Brought Us the Opioid Crisis

Romance in an Age of Grand Fortunes

62: Age Amazon's Jeff Bezos will be when his personal fortune hits $1 trillion, if his fortune maintains its growt… https://t.co/oTqpiPjeAS