A conversation with report authors Chuck Collins and Helen Flannery about their new report, “Warehousing Wealth”

Over the years, the IPS Program on Inequality and the Common Good has examined the ways that extreme inequality effects philanthropy.  In 2016, IPS published the report Gilded Giving: Top Heavy Philanthropy in an Age of Extreme Inequality, which looked at the rise of mega-donors and the decline of small-dollar donors, and the risks of both for a democratic society.

In that report, IPS briefly examined the rise of donor-advised funds (DAFs) as a mechanism for holding funds for later donations.  At that time, in 2015, the largest recipient of charitable donations in the U.S. was the United Way, an enormous public charity that had traded that top spot back and forth with the American Red Cross for decades.  But in 2016, for the first time ever, the largest donation recipient was a DAF: the Fidelity Charitable Gift Fund, a donation intermediary affiliated with financial services giant Fidelity Investments.  And, this year, six of the top ten donation recipients are now DAFs.

In a new report, Warehousing Wealth: Donor-Advised Charity Funds Sequestering Billions in the Face of Growing Inequality, IPS takes a closer look at DAFs and the risks they pose to the charitable independent sector, taxpayers, and the public interest.

I’ve never heard of a donor-advised fund.  What’s this all about?

Helen: A donor-advised fund (DAF) is a type of holding account that donors can put money into, and then parcel that money out later in the form of grants to qualified charities. Donors take a tax deduction when they give to a DAF, and, at least legally, they give up control over the money. But DAFs let donors recommend which charities they want the grants to go to, and when they want those grants to happen—and DAFs almost never go against the recommendations of the donor. DAFs were originally started in the 1930s by community foundations, but have grown tremendously since the 1990s, when Wall Street investment firms first started setting them up for their clients.

Are all DAFs bad?

Chuck: No. Most of the DAFs started by community foundations are committed to moving funds to real charitable nonprofit organizations in a timely way.  But there are cases of abuse, even among community foundations.  The Atlantic Magazine recently did an exposé on the abuses of DAFs at the Silicon Valley Community Foundation.

The real problem is the rapid growth of DAFs at commercial Wall Street investment firms like Fidelity Investment, Goldman Sachs, Vanguard and Charles Schwab.  It is in the interest of these financial service companies to have the money warehoused for years.  They collect management fees and encourage a “wealth preservation” mentality.  That makes sense if you’re doing lifelong financial planning for your retirement, but it makes no sense if you’re trying to solve social problems.  We know that a dollar invested today in intervening in a social problem is more valuable than a dollar invested in five years. 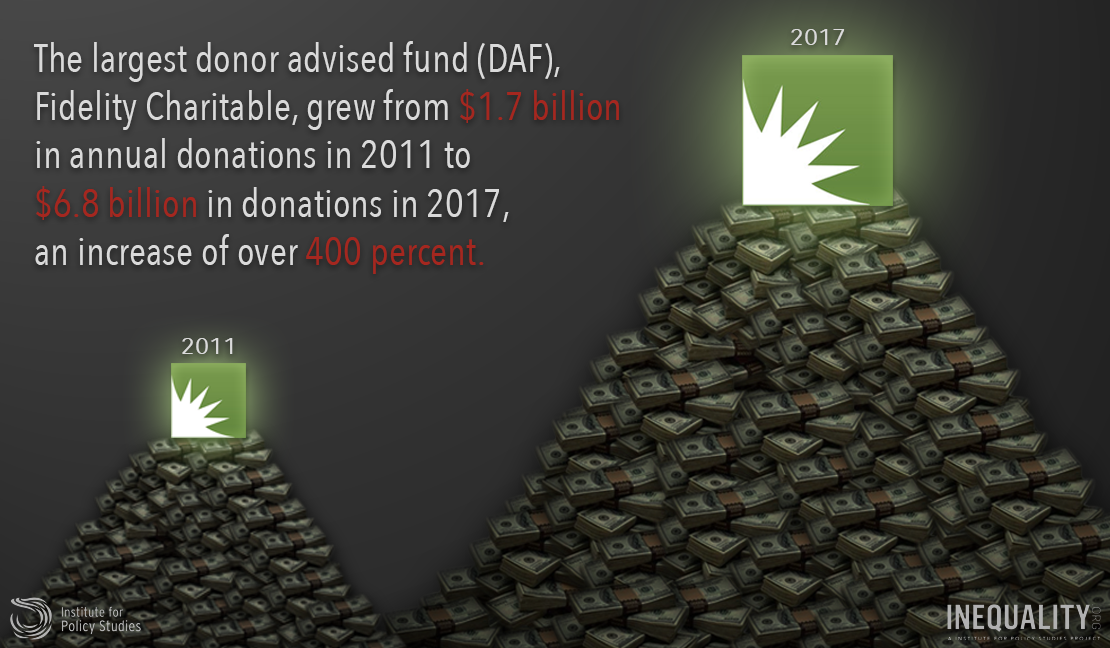 Once they give it away, do donors still have control?

Helen: Yes.  Legally, they have given up ownership of the money.  They can’t get it back for their personal use.  But, for all intents and purposes, they maintain control over the distribution of the funds and the ability to choose which charitable organization it goes to.  It’s a bit of a fiction that these funds are “donor-advised” when they are really “donor-controlled.”

Why does this matter at all?

Helen: The problem is in the tax deductibility of donations to DAFs. Very wealthy individuals give money to DAFs and get a big tax break immediately for their gift. But then the money may sit for years, and sometimes forever, before it is distributed to active charities on the ground.  The incentive system is broken. There is no incentive to move money out once it’s in the DAF. And, at least in the case of Wall Street sponsored DAFs, there are often incentives to keep money in the DAF.

Nonprofit organizations should be very concerned that a bigger and bigger share of the charitable pie each year is going to DAFs, getting tied up indefinitely, and that a smaller and smaller share is going to organizations trying to solve problems for the social good.

Okay, so wealthy people are using the DAF system, but isn’t it their money to do what they want?  And aren’t they giving it away to charities?

Chuck: I suppose it is positive that wealthy people are giving money to charity, even if the impact is delayed.  It is better than hoarding wealth to buy another private jet.

If donors were not claiming a tax deduction, then it might be “their money to do whatever they want.”  But because these donors are asking the rest of us to subsidize their donations through the tax code, there is a justifiable public interest to be monitored.

How do we subsidize the donations of billionaires?

Chuck: Through the US tax code, we provide major incentives for people to give to charity.  We effectively say, “you can pay less taxes if you give to a qualified charity.” For every dollar a billionaire gives to charity, we the people subsidize 37 to 57 cents of that donation through diminished tax revenue.

So a billionaire is paying less for veterans’ services, public infrastructure, etc., in order to provide donations to charities entirely chosen by them.  This is why there is a public interest in what they do with these funds.  And this is why it’s a problem that people are claiming the tax break and then sequestering the funds for years before transferring to a real working charity.

Isn’t what you’re saying true for private foundations?  Why pick on DAFs?

Private foundations also have higher requirements for reporting and transparency, which protect the public interest and justify the taxpayer subsidy.

There is also a much higher risk of abuse with DAFs when donors are giving appreciated non-cash assets like artwork or real estate. The rules for valuing those types of assets for DAF donations are much more lax than they are for private foundations. 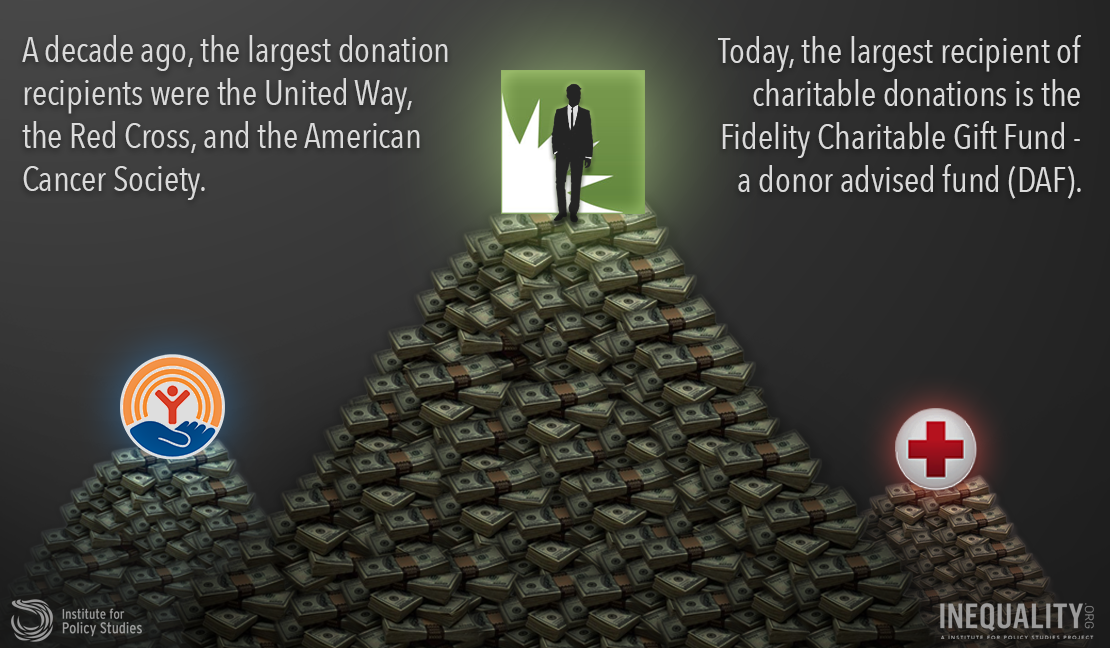 You write that some donors are giving back and forth between DAFs and private foundations.  Is this a problem?

Chuck: Yes, it is a problem when a private foundation, as a way to meet its minimal payout requirement, gives the money to a DAF with no payout requirement.  There are also instances of DAFs giving to private foundations. Think of it as money bouncing around in the clouds but not touching down to earth to a qualified charity that is set up to meet a charitable purpose.

How would you change the system?  Change the incentives?

There are some additional fixes we would recommend.  We would propose a ban on donations between private foundations and DAFs, which is really just another way to delay making a donation.

We could also reclassify the large commercial DAFs as what they are—intermediaries—not as qualified charities themselves.

Is this politically possible?

Chuck: We think if the public understood these abuses they would support these simple reforms.  We are obviously up against some powerful financial services companies that have effectively captured our political system.  But there is non-partisan reform potential here.  What little interest there has been in philanthropic reform has been led by Republicans like Dave Camp (R-MI) and Senator Charles Grassley (R-Iowa), with some interest by Senator Ron Wyden (D-OR).  The next step might be some Congressional hearings on the topic.

Chuck Collins directs the Program on Inequality and the Common Good at the Institute for Policy Studies, where he also co-edits Inequality.org. His most recent book is Is Inequality in America Irreversible? from Polity Press and in 2016 he published Born on Third Base. Collins cofounded the Patriotic Millionaires and United for a Fair Economy.

Helen Flannery is an Associate Fellow at the Institute for Policy Studies. She is a longtime researcher and data analysis professional working in the nonprofit sector and has written extensively on nonprofit industry trends, including trends in direct marketing fundraising, online giving, sustainer giving, and the macroeconomic factors affecting donor behavior.

New analysis finds more than one billion dollars in Donor-Advised Funds (DAF) Grants went to other commercial DAFs in 2019.