The Stimulus Deal Should Include Free College

Hayat Rahmeto is one recent college graduate who has decided to go back to school while the economy is in shambles. After graduating from college last year, she moved back in with her parents and planned to work two jobs to save money for law school. Then the pandemic hit. She lost one job, with Delta Airlines, and the prospects for finding another were bleak.

Fortunately, with her parents providing rent-free housing, Rahmeto realized she could afford to attend her local community college in Omaha, Nebraska, where she’s now working on a paralegal certificate program.

It will cost Rahmeto about $6,000. “This is the cheapest, most cost effective way to find out if law school is what I really want to do with my life,” Rahmeto told me.

Youth unemployment is sky-high, reaching over 20 percent for people aged 16 to 24 this June. Like Rahmeto, many other recent graduates would like to continue their education instead of trying to enter a bleak job market.

But not all have access to rent-free housing or a spare $6,000 for community college — nevermind the skyrocketing cost of traditional universities.

With few jobs available under the current crisis, it’s even more important to eliminate the financial barriers to continuing education.

Senator Bernie Sanders has proposed a College for All plan that would eliminate tuition and fees at public four-year colleges, universities, and community colleges. Additionally, it would cancel student debt for 45 million Americans within six months and ensure low-income students can attend college debt-free.

Free college proposals have received support from a growing number of organizations, including the Poor People’s Campaign.

In a “Moral Budget” proposal released with the Institute for Policy Studies, they point out that these investments benefit the whole country — not just students. One California study they cite found that for every $1 invested in public colleges and universities, the state gained $4.50 due to reduced poverty, fewer arrests and incarcerations, and higher tax revenues.

Making college free for all students would also help erase the stigma of financial aid. Rahmeto, who was born in the United States to Ethiopian immigrant parents, said she often felt other students looked down on her for having financial aid as an undergraduate at Franklin and Marshall College in Lancaster, Pennsylvania. 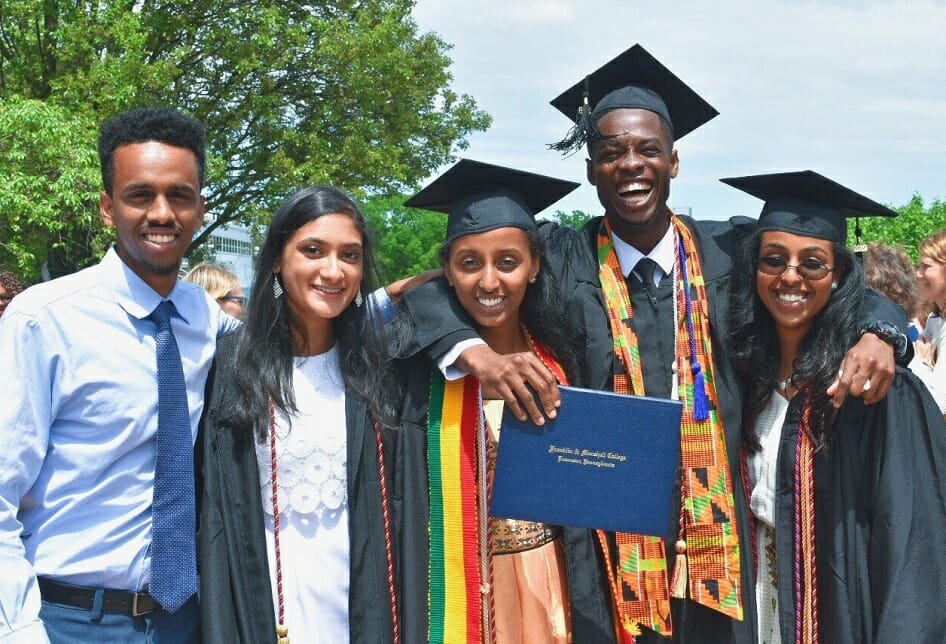 Hayat Rahmeto (middle) on graduation day at Franklin and Marshall College in 2019.

“It’s like, what, I’m sorry I wasn’t born into a life where my parents could afford to pay 60-some thousand dollars a year,” she said. “But why am I any less deserving than you? I worked even harder to get where I am now.”

In the current negotiations, Republicans are opposing the major Democratic proposals to lessen the burden of the crisis on students: $10,000 in loan forgiveness for financially distressed borrowers and an extension of the CARES Act provision to suspend federal student loan payments, which is set to expire on September 30. Free college is not even on the table.

Even before the pandemic, the exorbitant cost of higher education was holding our country back. That’s especially true now. Free college would allow young people who cannot find jobs now to learn new skills and knowledge that will better position them to join the labor market once the crisis is over.

Margot Rathke is a Next Leader at the Institute for Policy Studies. This op-ed was distributed by OtherWords.org.

Lifting these financial burdens would help individual debt holders meet daily needs, reduce the racial wealth gap, and give a boost to the national economy.

Unleashing the Power of Poor Voters in a Black Milwaukee Neighborhood

A new film follows community organizers facing multiple challenges to voter mobilization, including skepticism about whether elites have rigged our political system.

The Basic Case for a Wealth Tax

by Lee Price and Bob Lord

Within Health Care USA, Risk and Reward Have Never Been More Out of Kilter