The artist behind a provocative faux sales office highlights the dangers of Boston's luxury housing boom.

The apparent sales office for The Headstone is in a shipping container, alongside two dozen other shipping container exhibits and tents – all part of HUBweek, a festival focused on innovation and creativity that draws in more than 50,000 people in Boston. 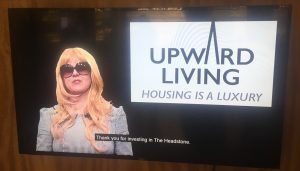 An image from a promotional video for The Headstone.

“The studio apartments start at $2.3 million,” says Pat Falco, standing in the doorway talking to a visitor. “It’s 700 square feet.” He wears a black shirt and cap with the company logo, “Upward Living: Housing is a Luxury.”

Boston City Hall Plaza has been taken over this week by HUBweek exhibits and workshops, all revolving around the theme of “We the Future.” The festival asks attendees to consider how to create an “inclusive and equitable Boston.”  Participants bounce around exhibits on robotics, artificial intelligence, and imagining the future of the city.  More than 200 companies are subtly hawking their wares, so a faux luxury real estate sales office fits right in.

But a closer look at Upward Living’s market materials reveals their real purpose for creating “an unparalleled portfolio of satirical, speculative, urban, mixed use properties” to “immerse residents in a critique of luxury housing.”

One older woman visitor asks Falco where the luxury tower will be located.

“The tower is going to be constructed on the Kings Chapel Burial Ground,” Falco explains, identifying himself as the son of the developer. “That’s why we call it ‘The Headstone.’  At 62 stories tall, it will be the city’s tallest luxury tower.”

“Will there be parking?” she asks.

“There will be six spots, for the penthouse residents.”

“Where will others park?” she asks with deep concern.

“Residents will have their drivers drop them off.”

The woman has a puzzled look on her face. She silently takes things in. Falco hands her a leaflet about the perils of luxury housing as she leaves.

Falco is not a sales agent, but an artist. And “The Headstone” is an ironic and provocative exhibit, designed to engage people on the dangers of excessive luxury housing.

“As an artist, I was interested in the impact of luxury development,” said Falco.  “This is a good crowd to talk to.  There is a lot of wealth, tech and innovation and talk about the future.”

Why a giant sleek tombstone tower?  “I was reading a book that described downtown global cities with these luxury buildings as “peaceful as cemeteries,” said Falco. “Here in Boston we have all these old burial grounds taking up space –so we could clear one.”  Of course, Falco doesn’t really support razing the King’s Chapel Burial Ground, but the idea adds to the project’s slightly over-the-top character.

A rendering of The Headstone.

Inside the sales office shipping container are a number of artistic renderings of the tower, rising like a sleek tombstone on the Boston skyline. “It has an ominous look but people don’t necessarily get it right away.  The other luxury condo projects have such crazy names. People accept the tombstone idea.  It’s sleek and we’re putting it alongside real marketing materials.”

“People either think its real and they are interested in it – and then they are kind of confused.  Other people are mad at luxury housing and how Boston housing is so expensive, so they take it out on us.  We want to talk to these people. It goes both ways.  It upsets people.”

Upset is the point.  As our recent IPS study pointed out, the luxury real estate boom poses numerous perils to Boston residents.  Falco and his co-creator Boaz Sender distribute a set of policy recommendations to address the affordable housing crisis.

If you’re in Boston, visit the Headstone Towers sales office during HUB Week. And if you can’t make it to the exhibit in person, take a look at the marketing website for Upward Living Associates.

Americans are their most charitable at year’s end. But even on days like Giving Tuesday, billionaire donors crowd out the impact of small-dollar gifts.