Nurses are Standing Up to Profiteers and Demanding Universal Healthcare

The first-ever Senate hearing on Medicare for All examined how our profit-driven healthcare system endangers patients and betrays nurses.

In 2021, a Kaiser Permanente facility in Antioch, California decided that the best way to celebrate its National Nurses Week was with “encouragement stones” wrapped in paper bags.

Management “gifting” rocks to nurses is an apt metaphor for how the United States treats these essential healthcare professionals – and administers healthcare in general. OSHA later fined that same Californian Kaiser facility for failing to report employees’ Covid-19 infections. 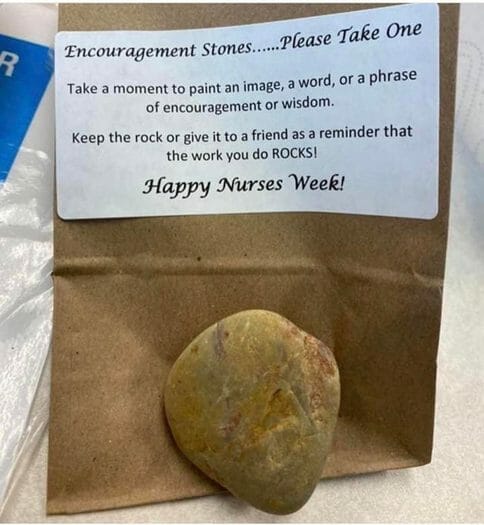 Throughout the pandemic, nurses have been forced to witness endless death and despair – and endure inadequate workplace protection all the while. An overwhelming sense of “moral distress and moral injury” has driven hundreds of thousands of healthcare workers to leave their profession in the last two years, while 1.2 million nurses hold licenses but are not currently practicing.

Not only do nurses need more substantial federal protections to raise standards and boost safety at work, they believe their poor workplace experience is inextricably linked to patients’ access to equitable, affordable care.

“The increased corporatization of healthcare and the continued devaluation of nursing labor can only be addressed by removing the profit motive from health care,” testified Bonnie Castillo, a registered nurse and Executive Director of National Nurses United, before the Senate Budget Committee on May 12th.

As registered nurses, our primary responsibility is to protect the health and wellbeing of our patients. Too often, our broken health care system gets in the way.

Watch as @NNUBonnie lays out exactly why nurses are calling for #MedicareForAll in her @SenateBudget testimony. pic.twitter.com/BSPHJaYIzp

Senator Bernie Sanders (D-VT) convened the first-ever Senate hearing on universal healthcare on International Nurses Day and reintroduced Medicare for All legislation. The senate bill has 15 co-sponsors, while a House version introduced by Rep. Pramila Jayapal (D-WA) has 121.

In a country where one out of four patients are unable to afford their prescriptions and 30 million Americans are uninsured, universal healthcare would close crucial gaps created by our wasteful, exploitative privatized model.

At a recent Federal Trade Commission and Department of Justice hearing, hospital professionals shared stories of how monopolization and consolidation harmed their ability to work and administer care – resulting in mass layoffs, service elimination, and rising costs for patients.

Kelley Tyler, a National Nurses United member and trauma care nurse from North Carolina, reported that her nurse-to-patient ratio increased from 1:3 to 1:5 after HCA Healthcare company took over a local hospital and cut rural cancer care and primary clinics.

Had Medicare for All existed before Covid-19, Castillo testified, the survival rate likely would’ve been higher because more patients would’ve sought care immediately rather than delaying treatment for fear of unaffordable medical bills.

Republican Senators attacked Medicare for All as overly expensive and even “unamerican.” Castillo responded by arguing that “the country cannot afford the financial burdens of a system with built-in inefficiencies, administrative waste, and needless profiteering.”

The inability to afford healthcare leads to 68,000 deaths per year, and medical bills bankrupt even more.

“Unless you’re Elon Musk, you could be one illness or injury away from financial ruin,” said Adam Gaffney, an Assistant Professor at Harvard Medical School who also testified at the Senate hearing.

Gaffney also testified that nearly a third of every dollar spent on healthcare in America gets wasted on bureaucracy, particularly on insurance companies’ claim contesting. Canada, a universal healthcare bellwether that conservatives love to hate, spends half that proportion on administration.

If the United States fully realized a model of Medicare for All policy by 2030, Congressional Budget Office analysis suggests that the country could net $650 billion in that year alone.

CEO Pay is Out of Control

In a Fox News op-ed, Senator Sanders reported that the top six health insurance companies raked in $60 billion in profits last year and spent over $10 billion since 1998 to help elect politicians to safeguard the status quo. National Nurses United President Jean Ross confronted the CVS CEO at their shareholders meeting for donating $5 million to an anti-Medicare for All dark money group.

“Here’s the bottom line,” wrote Senator Sanders. “If every major country on earth can guarantee health care to all and achieve better health outcomes, while spending substantially less per capita than we do, there is no reason, other than greed, that the United States of America cannot do the same.”

Debunking the Myth of the Fleeing Millionaire

The Height of Folly: Safeboxes in the Sky