New York, New York, What a Less than Wonderful Town

Any city — any society — that lets the rich keep as much as they can grab is asking for big-time trouble.

The ultimate real-life test of “trickle down” — the notion that we all prosper when the rich get richer — may well be New York. The Big Apple, after all, certainly abounds in rich getting richer. No city in the world now hosts more of humanity’s super rich.

Researchers at Wealth-X last month put the New York billionaire total at 103, ten more than Hong Kong. Top 1 percenters in New York overall are now taking in over 40 percent of the city’s income, about double the top 1 percent’s income share nationally in the United States.

Numbers like these don’t happen by accident. Local and state officials in New York have worked diligently for decades to make their city as attractive as possible to the ten-digit set.

“If we could get every billionaire around the world to move here,” as then mayor of New York Michael Bloomberg, himself a billionaire, noted in 2013, “it would be a godsend.”

At that mission, Bloomberg and his pals would prove remarkably successful. The fantastically rich physically dominate New York as never before. Luxury residential towers over 75 stories tall now look down upon midtown Manhattan, casting shadows that darken ever wider swatches of Central Park. 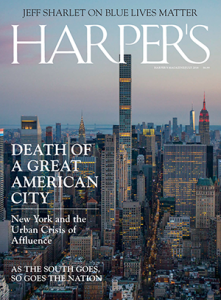 Fancy restaurants abound throughout Manhattan and beyond. Broadway is booming. Millions of tourists are trampling on streets free from grit and grime. New York, the city’s most ardent cheerleaders proclaim, has never been a better place.

Never been a better place, counters long-time New York resident and writer Kevin Baker, only if you’re talking about the rich. For everyone else, Baker details in a July Harper’s magazine cover story, life in New York can seem like a scene from a sci-fi flick that has bystanders barely noticing “as our fellow human beings are picked off by the monsters living among us.”

The poor, of course, have life the hardest in the new New York, and the city has many more of them. One in five New Yorkers — 19.6 percent — currently rate as officially poor. Back in 1970, that rate stood at 11.5 percent.

The ranks of the near-poor have swelled as well. Almost half the city lives a precarious existence, “just one paycheck away,” writes Baker, “from disaster.”

Most of the rest of New York’s 8.6 million people strain to maintain a decent middle-class existence. The city is losing its “most treasured amenities,” adds Baker’s Harper’s analysis, those aspects of life most “essential to its middle-class character.”

“Look at almost any public service or space in New York,” he advises, “and you will see that it has been diminished, degraded, appropriated.”

Parks throughout the city have slipped into the hands of privately funded “conservancies” that operate more as businesses than public services. The once-free Central Park Zoo now costs the classic family of four $62 to enter.

Some parks have simply disappeared. The new Yankee Stadium sits on what had been, notes Baker, “two beloved public parks.” Local, state, and federal officials graced the owners of the Yankees with $1.2 billion in subsidies. The owners graced the city back with a ballpark that has 9,000 fewer seats for the general public and 37 more luxury suites for the deep-pocket set.

An unlikely advocate for a cap on income

For these deep pockets, New York has become a dazzling cornucopia of consumption options, with posh shops full of luxuries of every description. For those of more pedestrian means, the “warrens of little shops and businesses” that used to sustain — and enliven — daily life are vanishing in one neighborhood after another. Last year, on one stretch of a prime commercial avenue in Manhattan, researchers found 188 vacant storefronts.

Baker tells the story of a proprietor of one of New York’s vanished small businesses. She had been paying $7,000 a month to rent the space for her laundromat. The landlord upped that to $21,000.

Back in the mid-20th century days of Abbott and Costello, your landlord lived in your neighborhood. Today’s New York landlord will more likely be a private equity empire, a lavishly financed international firm, Baker notes, “highly incentivized” to replace low-rent tenants with more lucrative lessees. The resulting high rents are driving away neighborhood-based commerce.

Driving people away, too. Between 2014 and 2017, rents for vacant apartments in New York rose 30 percent, about three times faster than the typical incomes of renting families. What happens when arithmetic like this happens? Homelessness happens. New York’s Department of Homeless Services now on average shelters 60,000 people per night.

Meanwhile, the average price for a condo or elite “co-op” apartment last year topped $2 million for the first time ever. In one of New York’s newest luxury towers, developers have priced one four-story apartment at $250 million.

Those wealthy who park themselves in these luxury towers can find just about everything they desire without having to venture outside.

“Want a drink or a meal, a swim or a game of pool at the end of the day, a yoga class or a good book?” as Baker relates in Harper’s. “There’s no need to step out into the city.”

The predictable result: more and more civic “dead zones,” lifeless sections of the city where once vibrant street life existed.

And under the street, in New York’s famed subway system? Baker describes “longer and longer delays, with both cars and platforms filling up with frustrated, angry passengers.” Mayor Bill de Blasio sought a “millionaire’s tax” to fix the subway’s antiquated operationa. Governor Andrew Cuomo rejected the idea, instead suggesting “a ‘genius transit challenge’ wherein anyone who came up with a great idea to make the trains run on time could win a million dollars.”

“A tax on the wealthiest New Yorkers to restore even the most vital public good,” writes Baker, “cannot be so much as entertained.”

So what can be done, he goes on to ask, “about a New York that is, right now, being plundered not only of its treasure but also of its heart, and soul, and purpose?”

Baker has some “practical reforms” to suggest, everything from ending subsidies for wealthy developers to reinstituting commercial rent control. But he exudes no optimism about the chances these reforms will ever advance. He sees a political system rigged to enrich the already rich.

Ever since the 1970s, Baker notes, “all that our urban leaders, in New York and elsewhere, Democratic as well as Republican, have been able to come up with is one scheme after another to invite the rich in.” They “seem hopelessly invested in importing a race of supermen for the supercity.”

“Yes,” Baker concludes, “the rich will be with us always.”

But why must we accept this notion that the rich will always be with us? We don’t accept the notion that poverty will always be with us. The United Nations has grand global efforts underway to “eradicate extreme poverty for all people everywhere.” Why aren’t we endeavoring to eradicate extreme wealth? Perhaps more to the point: How can we afford not to?

Kevin Baker’s powerful analysis brilliantly exposes the toxicities we inevitably nourish when we set no limits on how much our awesomely affluent can grab and pocket. Ever-widening gaps between our richest and everyone else, the story of contemporary New York helps us see, stretch our social fabric. At some point, that fabric will tear.

Can’t we just mend any torn social fabric? Easier said than done when the rich hold most all the thread.

A century ago, at a time of staggering inequality not unlike our own, we had New Yorkers of distinction who dared to directly challenge excessively concentrated wealth and power. New York attorney Amos Pinchot — a top aide in Teddy Roosevelt’s 1912 “Bull Moose” insurgent bid for the White House — led a national campaign five years later to place a 100 percent tax on all individual annual income over $100,000, the equivalent of almost $2 million today.

New Yorker Sidney Hillman, the nation’s most innovative labor movement leader, backed that campaign, and a generation later Hillman, by then President Franklin Roosevelt’s top labor confidant, watched as FDR in 1942 proposed a 100 percent cap on income over $25,000.

Congress would end up giving Roosevelt a 94 percent tax on income over $200,000, and America’s top tax rate on the incomes of the nation’s wealthiest would hover around 90 percent for the next two decades, years that would see the United States grow the first mass middle class in world history.

New Yorkers like Amos Pinchot and Sidney Hillman did not accept the notion that the rich will always be with us. We shouldn’t either.

Sam Pizzigati co-edits Inequality.org. His latest book — The Case for a Maximum Wage — has just appeared. His 2012 book, The Rich Don’t Always Win: The Forgotten Triumph over Plutocracy that Created the American Middle Class, 1900-1970, tells the story of 20th-century efforts to cap the income and power of America’s richest. Follow him at @Too_Much_Online.

Celebrating the End of Slavery — With One Big Asterisk