Invest in Minnesota’s Communities, not the Super Bowl

Activists are using the spotlight on the Twin Cities to draw attention to affordable housing and corporate mistreatment in their hometown.

The Super Bowl is headed to Minnesota’s Twin Cities on February 4, and with it, analysts and officials promise, will come millions of tourism dollars. Questions linger about how much the game will actually bring in, but a group of Minnesota residents are fighting to bring the lion’s share of the sum back into the community.

In the days leading up to the big game, more than a dozen local organizations are coming together to ensure that the needs of the community are front and center as sports fans descend upon the city. Octavia Marberry, one member of that coalition, is directing the spotlight towards the renters demanding safe and affordable housing. Marberry is one of many Twin Cities tenants going on rent strike on January 31, in an attempt to push for better living conditions and draw attention to gentrification and displacement in the region.

Marberry likes her neighborhood — the streets are clean, there’s access to public transportation, and her kids go to school and daycare nearby. She even enjoys her apartment, with one big exception: she doesn’t have heat, even during the frigid winter months, and she says her landlord won’t do anything about it.

“Rent is supposed to include heating but I’ve never had heat,” Marberry says. “Between paying rent and providing for my children I don’t have a whole lot of money left over and it is frustrating to pay for something I’m not getting.” 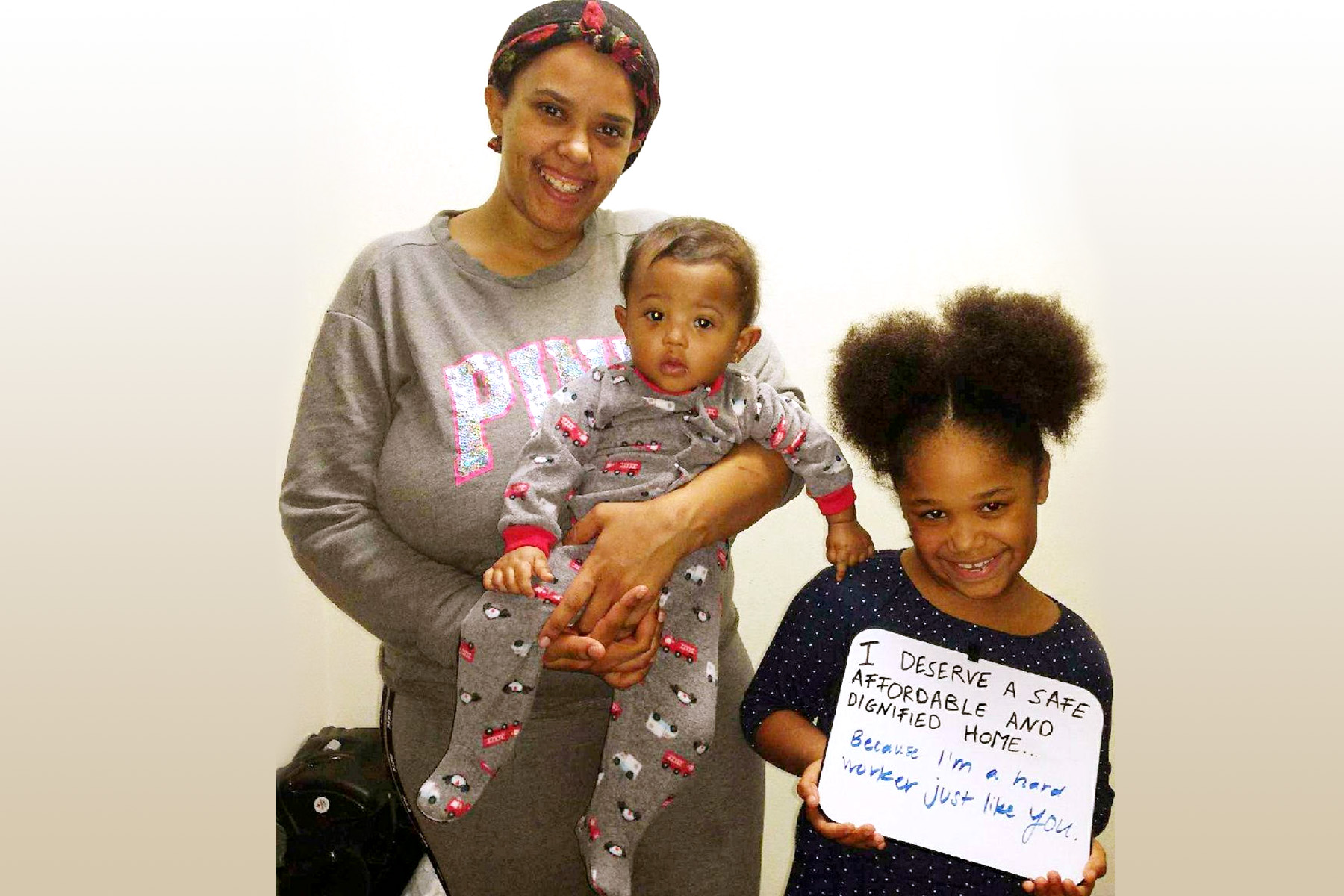 Marberry with her family.

But the frustration is hardly at the top of her concerns. “Can you imagine what it’s like to have no heat or hot water in the dead of a Minnesota winter?” she asks. And, especially with young kids, the cold poses a health risk. Marberry says her son keeps getting sick this winter, which means missed work days, making rent an even bigger challenge. Moving out is hardly a solution, with rents on the rise across the Twin Cities.

Marberry says she and the other tenants have tried to engage her landlords time and time again, but nothing gets done. “I’m not going to sit here and keep waiting for them any more,” Marberry says. “I need a safe home for me and my children. We deserve a safe and dignified place to live.” And ultimately, she feels she’s exhausting her options for improving her living conditions. As she says, “it’s time to take a stand for myself and my babies. I know that if we all come together, fight for our rights and tell our stories, we can win.”

The rent strike is only one event in what organizers have dubbed a week of resistance ahead of the Super Bowl. Activists in the area have planned a variety of anti-corporate, anti-racist actions, from protests against police violence to demands for workers’ rights.

Organizers say the Super Bowl wouldn’t be happening without the help of taxpayers, which is why the event should take the concerns of the community seriously. After all, the game is taking place in what legislators dubbed “the People’s Stadium,” a not-so-subtle bit of advertising lingo meant to win residents over on the high cost of the endeavor. The stadium opened in 2016 as the U.S. Bank Stadium (with the hefty profits from the naming rights going to the Minnesota Vikings football team), thanks to a sizeable amount of help from the public.

The state of Minnesota put $398 million into the project, with the city of Minneapolis adding another $150 million to the bucket. The total amount of public money comes to nearly $500 million, just short of 50 percent of the stadium’s cost. State and city officials hope that the Super Bowl will bring in a large chunk of money for the region — an economic analysis commissioned by the Minneapolis Super Bowl Host Committee put the number at $343 million — but those numbers are often considered to be inflated by economists.

Then there’s the question of who reaps whatever economic rewards that do come into the region. For Octavia Marberry, there’s only one moral answer as to who should profit. As she puts it, “it’d be nice if the Super Bowl would value our people over lining their pockets.”

Separate and Unequal: Chuck Collins on How Wealth Divides Us