In Mexico, a Challenge to a Deeply Corrupt and Unequal Status Quo

Voters in one of the world’s most top-heavy major nations face a significant choice July 1.

The upcoming presidential election in Mexico — now just eight weeks away — may well prove to be this year’s most significant worldwide referendum on inequality. Mexico, after all, rates as one of the world’s most unequal major nations, and the party of the presidential candidate currently topping the polls — Andrés Manuel López Obrador — is pledging to confront the privileged Mexican few who are concentrating the nation’s “economic and political power.”

But many sober pundits aren’t viewing this spring’s Mexican presidential campaigning through an inequality lens. They instead see crime and corruption as the election’s central issue, and they do have a point.

One global watchdog organization, Transparency International, currently rates Mexico as one of the world’s most corrupt major nations. Most average Mexicans, for their part, feel nothing but revulsion at the greed grabs that so define the nation’s traditional political leadership class. 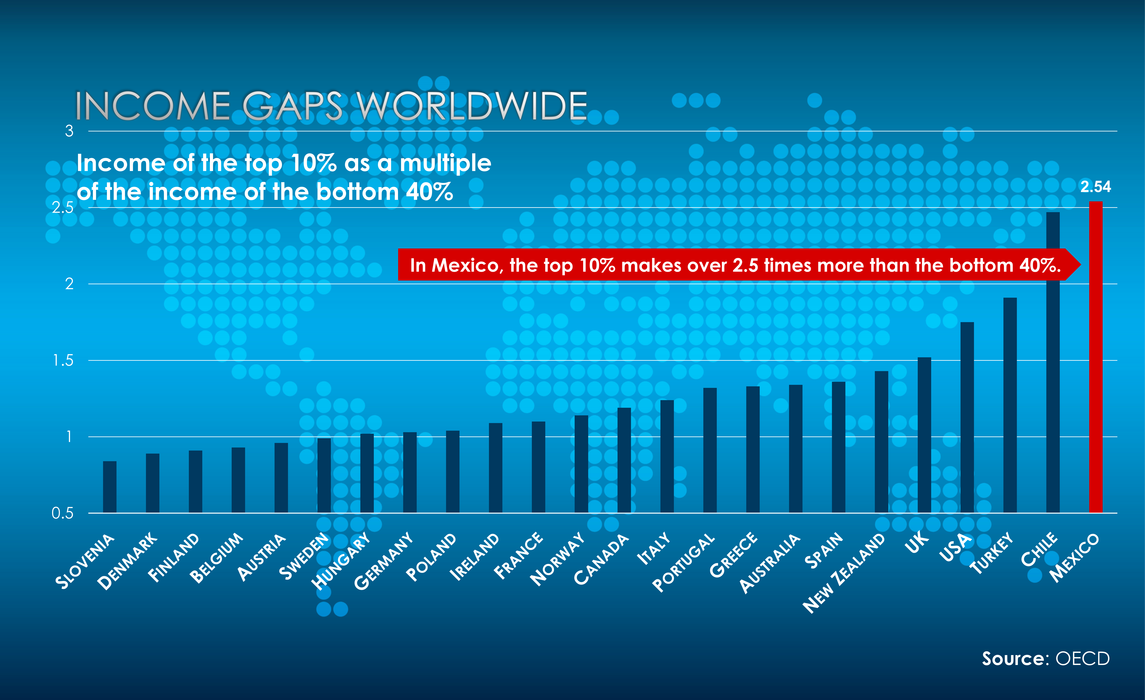 Mexico’s two most dominant political parties over recent decades, as one cynical voter told me last week, share the same larcenous proclivities. But the two parties, she went on, do have their differences.

The PRI, the current ruling party, welcomes into its ranks anyone interested in robbing the people, this voter explained. The PAN, the more upfront business party, only welcomes accomplices who have the appropriate social-class pedigree.

Mexico’s third major party since the mid 1980s, the PRD, once loomed as a viable progressive alternative to the nation’s deep-seated political corruption. And Andrés Manuel López Obrador, or AMLO as most everyone in Mexico refers to him, ran two bids for the presidency under the PRD banner. He lost both, in 2006 and 2012, amid widespread allegations of fraud.

But the PRD has since become, to most voters, just another player in Mexico’s corrupt political games. AMLO broke away in 2014, starting a new party that goes by the acronym MORENA. The PRD, in this year’s election, has allied itself with the PAN, essentially dropping all pretense of progressivism. 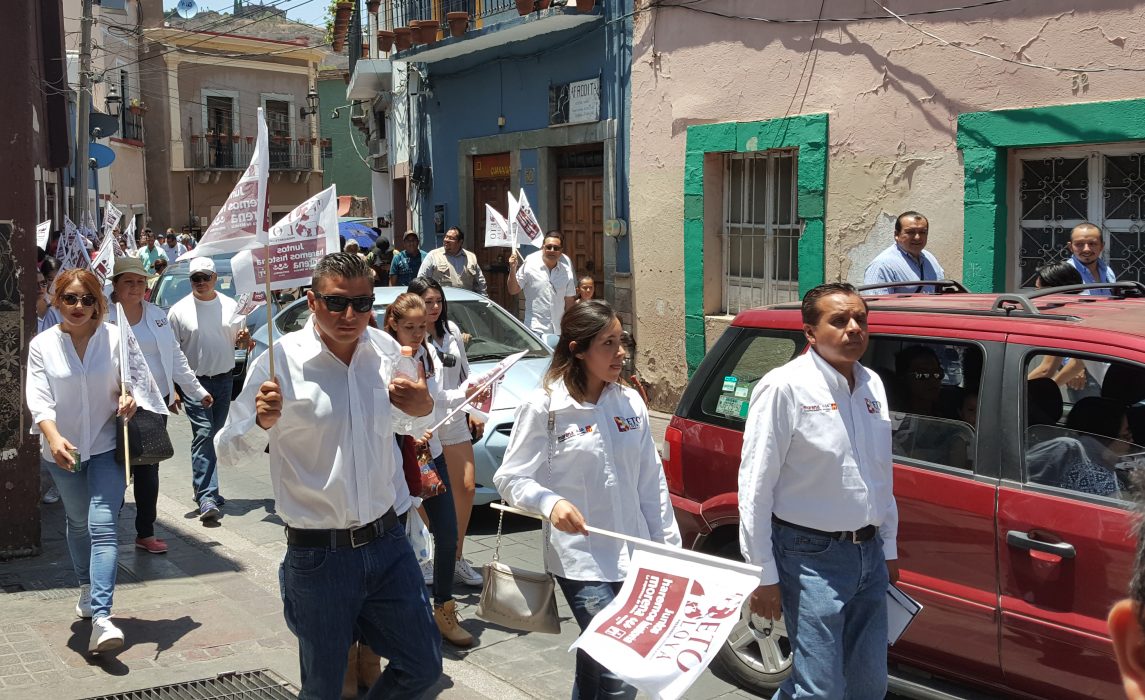 Supporters of MORENA march in the city of Guanajuato, a central Mexico state capital whose mines once rated as one of the world's most important sources of silver.

MORENA’s progressive challenge to the Mexican status quo is currently raising hysterical alarm bells in the U.S. media. Various outlets — ranging from the Wall Street Journal and Politico to the Washington Post and the New York Times — have compared AMLO to everything from the second coming of Venezuela’s socialist Hugo Chávez to a Trump-Putin look-alike “populist” demagogue.

In fact, AMLO comes across personally as more modest than militant, and the policy framework that MORENA has advanced, Proyecto 18, is overflowing, as John Ackerman, an American teaching at Mexico’s most prestigious university, notes, with “development projects, scholarships, and anti-corruption initiatives, not expropriations or nationalizations.”

MORENA is essentially pushing for an activist administration that can help bring honesty and a vibrant social safety net into Mexican everyday life. That makes MORENA a dangerous threat to the nation’s elites. They owe much of their ample fortunes to a crooked crony capitalism that has been systematically deregulating and privatizing the Mexican economy for most of the last four decades. 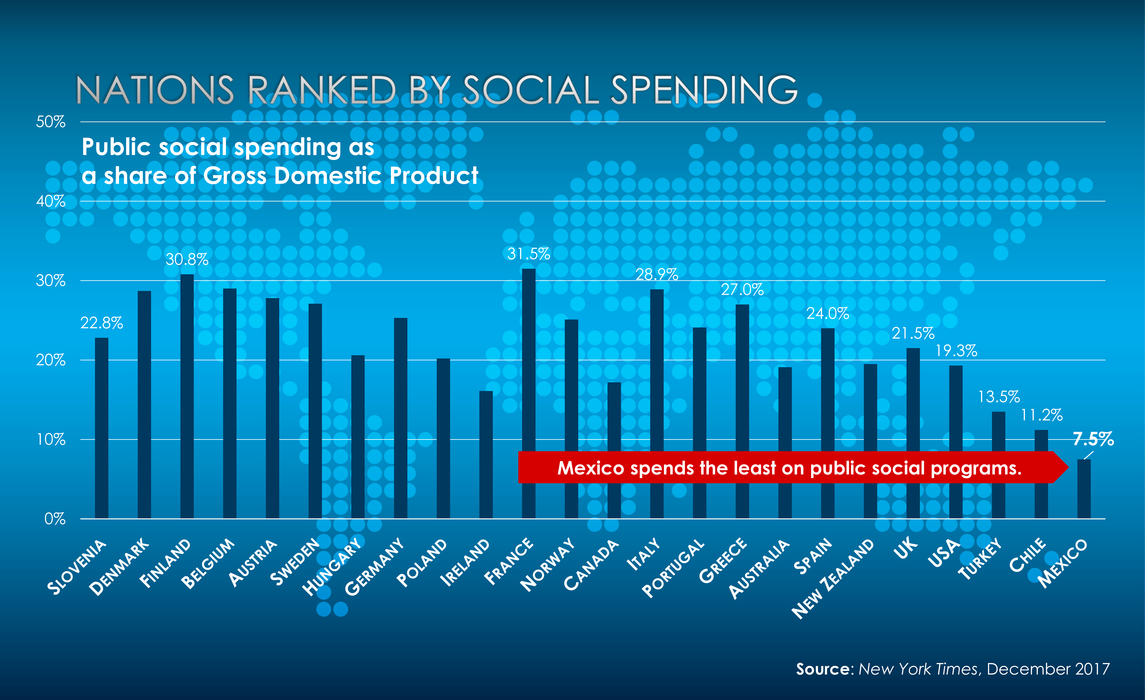 The Mexican people, particularly the nation’s poorest, have paid dearly for those policies. Mexico doesn’t just rank around the global bottom on levels of inequality. Mexico also ranks around the worldwide bottom on programmatic investments in social decency.

And none of this should be particularly surprising. Inequality, corruption, and social indecency always all go hand in hand.

“Inequality breeds corruption,” as Henry Schumacher of the Filipino European Chamber of Commerce noted last year. Corruption, in turn, aggravates inequality: Only the well-off can afford to bribe. An unholy trinity — inequality, corruption, and mistrust — creates a “vicious circle” almost impossible to bust.

MORENA is promising to bust that circle.

“This movement,” MORENA general coordinator Claudia Sheinbaum Pardo told a party conference last November, “seeks for economic development to reach everyone and everyone, for inequality to diminish, for human rights to be respected and for a new history to be built where corruption, impunity, and injustice are part of the past.”

AMLO currently leads the national political polls by 18 percentage points. The world will be watching what happens next.

Sam Pizzigati co-edits Inequality.org. Among his books on maldistributed income and wealth: The Rich Don’t Always Win: The Forgotten Triumph over Plutocracy that Created the American Middle Class, 1900-1970. His latest book, The Case for a Maximum Wage, will appear this spring. Follow him at @Too_Much_Online.

May Day Parade Stands Up Against Wage Theft

My Advice for High School Graduates: Learn a Trade