The South Dakota Congresswoman sits on the powerful Congressional conference committee hashing out the final version of the Republican tax bill. Whose interests is she serving?

There is something very fishy about the story that South Dakota Congresswoman Kristi Noem keeps repeating about her family’s struggle to pay the estate tax.  She has some explaining to do.

Rep. Noem was appointed by House Speaker Paul Ryan to the Congressional conference committee that will reconcile the House and Senate tax bills. Her role will be estate tax repeal watchdog.

Referencing the estate tax, she told Richard Rubin at The Wall Street Journal, “I’m on the conference committee to build consensus on many, many different issues. But this is obviously a priority of mine, too.”

Her personal story about the estate tax is full of fishy statements. In April 2015, Noem took to the House floor and told the story of her father’s tragic death in 1994 that triggered an estate tax.

“It wasn’t very long after he was killed that we got a bill in the mail from the IRS that said we owed them money because we had a tragedy that happened to our family…We could either sell land that had been in our family for generations or we could take out a loan.  So I choose to take out a loan but it took us 10 years to pay off that loan to pay the federal government those death taxes.  It is one of the main reasons I got involved in government and politics was because I didn’t understand how bureaucrats and politicians in Washington DC could make a law that says when a tragedy hits a family they are somehow owed something from that family business.”

In a recent Fox News column, Noem repeated the claim that, “A few months afterward, we got a letter from the IRS telling us we owed the ‘death’ tax.“

Here’s what is odd about Noem’s story.  Since 1982, estate tax law has included a 100 percent marital exemption that allows wealth to pass to a spouse with no taxation.  In other words, when Noem’s father died they did not have to pay any estate tax.  Noem’s parents were married at the time of her father’s death and her mother Corinne Arnold, is still alive today. The assets her father owned would transfer to her mother tax-free. 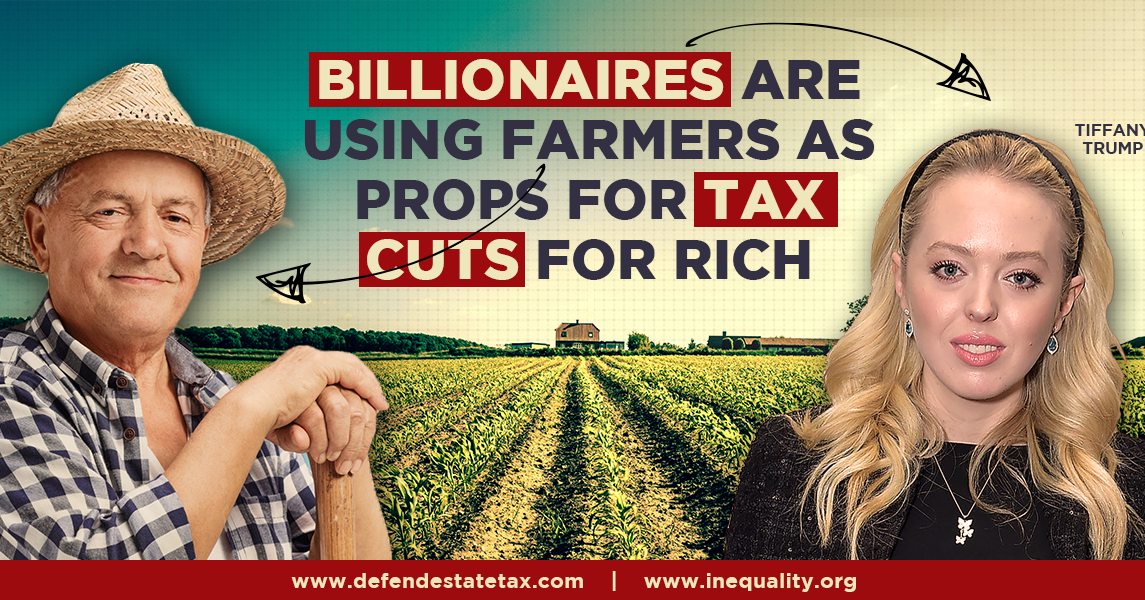 “It’s hard to believe the estate of a farmer who died in 1994 and was survived by his spouse was subject to tax,” said Robert Lord, a Phoenix tax attorney with an expertise in estate tax law.  If they had set up trusts or other arrangements that backfired, Noem should explain this.

Noem’s claim that the IRS sent a bill “within a few months” is also suspect.  In 1994, families had 9 months to file an estate tax return with the option of filing a six-month extension.  Tax payments could be deferred for 5 years.  The IRS would not have sent a letter without a filing.  This is the usual conservative demagoguery about the “taxman showing up at the funeral.”  While certainly dramatic sounding, it is factually wrong.

Despite Noem’s speeches railing against taxes and big government, she has shown no hesitation in cashing millions in taxpayer-funded farm subsidies.

Between 1995 and 2016, her family-owned Racota Valley Ranch in Hazel, South Dakota deposited over $3.7 million in government farm subsidies.  In 2012 alone, they cashed $232,707 in subsidy checks, according to the Environmental Working Group Farm Subsidy Database.

One has to wonder at the hypocrisy of taking millions of dollars in taxpayer money for herself while at the same time calling for deep cuts to basic public programs triggered by deep tax cuts for the wealthiest households in the country.

As I wrote in USA Today:

Kristi Noem is now at the center of the national debate over estate tax repeal and her personal story is regularly repeated as an example of how the estate tax hurts family farmers and ranchers.  But things have changed a lot since 1994 when the amount of wealth exempted by the tax was $600,000 for an individual.  The wealth exemption is now $5.5 million per person and $11 million per family.  Closely held businesses and farms have 14 years to pay the tax at low interest.

The number of farmers subject to the estate tax has been dramatically reduced as have the total number of estates.  South Dakota is the state with the fewest taxable estates in the entire country, roughly 15 estates per year.

Losing one’s father and a family breadwinner is a traumatic event.  But 23 years later, this story is still being used to justify the elimination a tax that is now exclusively paid by multi-millionaires and billionaires.  Only two out of the wealthiest 1,000 estates are subject to the tax.

Before she leads the GOP crusade to abolish the estate tax, Kristi Noem has some accounting of her own to do.

Who Should Be the 2017 Plutocrat of the Year?

How to Ruin a Perfectly Good CEO Pay Reform