Moving Towards a Green Economy in Kentucky

High school student Kevin Short is working with Kentuckians for the Commonwealth to ensure the state prioritizes people over coal profits.

The school year has just wrapped up for Kevin Short, which means he has more time to devote to activism. The high school student turned 17 last month — only one more year until he can vote, he says excitedly — but he’s already cut his teeth in advocacy through his work with Kentuckians for the Commonwealth. Among his priorities: ensuring the state starts to put people and the planet over the profits of coal companies that have long defined the region’s economy.

Short credits his mother, Linda, with his interest in activism. Though she’s not politically involved herself, she taught him to value empathy above all. When he became attuned to the problems around him, “the empathy that she taught me translated into political advocacy,” he says. His first foray into politics came through his work on LGBTQ+ issues. His family was supportive through and through when he came out as gay, but the issue is personal for him, especially as he lives in a conservative area of the state.

He grew more politically involved around the 2016 election, joining, and becoming president, of the Kentucky High School Democrats. From there, he turned his attention to inequality and systemic racism — “things that can be combated,” Short says, “but not if people keep turning a blind eye to them.”

The desire to shine a light on inequality brought Short to Kentuckians for the Commonwealth. His mother drove him — “a literal driving force behind my activism,” he jokes — to a coffee meeting with an organizer that changed the course of his activism. It was that meeting, Short says, that made him decide to stay and fight for the future of Kentucky for the rest of his life, rather than moving away at the first opportunity.

Besides, his roots in Kentucky run deep. After joining Kentuckians for the Commonwealth, he learned that organizing with the group was a family affair. His grandfather worked with them in the 1990s to prevent strip mining of Black Mountain, Kentucky’s highest peak. His other grandfather, a coal miner who got black lung on the job, had also acquainted him with the toll coal was taking on the state’s people. Short’s desire to turn Kentucky’s economy green is personal.

“Kentucky’s always been ‘coal country.’ That’s how they view us,” Short says. “I think it’s so imperative that people from Kentucky, from the coal areas, say ‘this is a dying industry, it’s not coming back, stop lying to us, and let’s work on a new transition.'”

Down Home North Carolina builds a movement in the South

Through Kentuckians for the Commonwealth, Short has become involved in efforts to do just that. Earlier this year, he lobbied against net metering legislation that would make it more difficult for low-income people to get solar power in Kentucky. Short also makes regular calls to U.S. Sen. Mitch McConnell’s office in favor of the RECLAIM Act, which would create jobs by reclaiming abandoned coal mines in the state.

Everyone Short talks to is supportive of turning towards renewable energy, but that doesn’t mean the transition is politically simple. “It’s like there’s no alternative in these communities,” Short says. “The economy is surrounded by coal.”

In Harlan County, Short mentions, the dependency on coal led to an education crisis. As coal jobs dwindled, the miners left. Their spouses — many of them teachers and education support staff — went, too, leaving the county with a serious teacher shortage.

“It has a domino effect like that, and we need a nuanced view of these issues,” Short says. “We need a nuanced plan that we can explain to communities in a fair way. Because no one sentence can explain how we can transition like we have to do.” Kentuckians for the Commonwealth worked with the public to develop a plan along these guidelines. Empower Kentucky, their project, lays out common-sense principles for transitioning the state away from coal and towards renewable energy.

Get the latest inequality news in your inbox each week

But a concrete plan is far from the only thing necessary, especially given some of the established narratives around coal in Kentucky — and the coal barons financing them. “When you have one force that is good and true, but one force with money that is deceitful and only cares about lining its pockets,” Short says, “you’re going to have misinformation spread.”

Short remembers seeing a Fox News clip on John Oliver’s Last Week Tonight, where coal CEO Robert Murray admitted he didn’t think coal jobs would be returning to the U.S. “The fact that you can have a clip of a coal CEO saying ‘coal’s not coming back where it’s already been lost’ and yet they still say that that exact line to people, you just really have to think they’re really willing to say anything, do whatever, as long as the money keeps coming in.”

Seeing what ordinary Kentuckians are up against helped motivate his work with the Poor People’s Campaign. Kentuckians for the Commonwealth is one of the campaign’s state partners, and Short has spoken at their rallies. The campaign’s emphasis on fixing systemic issues is particularly appealing to him.

“All of these issues, when boiled down, are because people in power assume that people without power are without it because of their own problems, not that the system is rigged against them, but because they’re not willing to put in the effort, without realizing that sometimes you can put in all the effort you can, and it’s still not enough.” 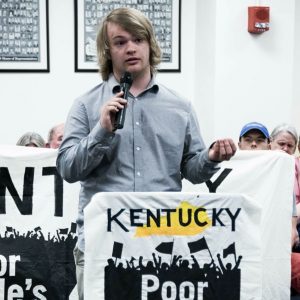 Short is also passionate about bringing more young people into the fold of progressive organizing, something that his organization excels at doing. “Kentuckians for the Commonwealth does such a great job of having respectful conversations with younger individuals. Because I know some people I’ve met — elected officials, even — aren’t very respectful towards people who can’t vote for them.”

It’s important for younger people to know they don’t have to wait until they’re able to vote to be politically involved. “Most people my age think ‘I don’t know enough about that subject to be talking about it with elected officials,’ when they probably do,” Short says.

“Knowing that we need better jobs and a good environment? That’s all you need to know to tell your lawmakers,” Short says. “It’s up to us to express our will.”

Parody Video: A Monument to Excess Rising in Boston’s Back Bay

For Minimum Decency, a Maximum Wage