The Gilded Glamour Met Gala Was a Fantasia of Inequality

Our second Gilded Age isn’t as enchanting as Condé Nast and celebrity spectacle make it seem – but a red carpet parade while event workers struggle for dignified treatment epitomizes the era.

“When you heard that the theme was ‘Gilded Glamour,’ what did that mean to you?”

“I honestly didn’t really think about it,” Kourtney Kardashian laughed in response to red carpet correspondent Lala Anthony, looking down at her Thom Browne ensemble.

Regardless of Kardashian’s forethought, her presence was perfectly pertinent to this week’s Met Gala. The first Monday in May was the 74th annual fundraiser for the Metropolitan Museum of Art’s Costume Institute, which produces fashion exhibits in concert with publisher Condé Nast’s Vogue magazine.

Over the years, the New York City event has garnered hundreds of millions of dollars for the museum, generating hundreds of millions of dollars in “media impact value” each time. One of the most coveted, expensive invitations in town – tables cost several hundred thousand dollars – the Gala’s red carpet is reputation-making and prestige-vaunting, graced by everyone from billionaires like Elon Musk to nepotism babies like Brooklyn Beckham and Nicola Peltz and rising stars across all creative industries.

To commemorate the second exhibit in a two-part celebration of American fashion, Vogue’s head honcho Anna Wintour prescribed the “Gilded Glamour” theme, asking attendees “to embody the grandeur — and perhaps the dichotomy — of Gilded Age New York.” The magazine characterized the period as “one of unprecedented prosperity, cultural change, and industrialization, when both skyscrapers and fortunes seemingly arose overnight” – yet made little mention of how Gilded Age glitz veiled rampant destitution.

The booming, speculative economy and its bosses’ greed forced millions of new immigrants and people of color into grueling work to survive. The first Gilded Age was our country’s most unequal period – until now.

The Kardashians, Vanderbilts of the attention economy, arrived at the gala in new money splendor. Kourtney’s sister Kim donned Marilyn Monroe’s “Happy Birthday Mr. President” dress, a $5 million dollar antiquity on loan from a museum. In order to fit into it, Kardashian admitted to shedding 16 pounds in three weeks, embodying gilded excess by being so well-resourced that she voluntarily starved for a publicity stunt.

This kind of extravagant self-modification, for which the Kardashians are renowned, can distract from terrible conditions faced by most everyone else, including those in the family’s employ. The parent company of many of the family’s product lines, Global Brand Group, abandoned tens of thousands of Bangladeshi garment workers–mostly women–without pay during Covid-19. Even before their cruel firing, the women worked in sweatshop conditions, reminiscent of the Gilded Age that other Met revelers were eager to historicize.

It wasn’t just the Kardashians who were perfectly “on theme.” (And no, I’m not talking about all the literally gilded, studded, and metallic dresses.) Wearing a custom tuxedo jacket that read “END GUN VIOLENCE,” New York City Mayor Eric Adams opted to rub elbows with elites instead of working on his agenda. Days later, he nominated the owner of his favorite private member’s club to the Met’s board of trustees.

Beyond individuals, the premise of the philanthropic gala itself is as gilded as could be, exemplifying America’s plutocratic giving culture that allows rich donors to favor their pet causes – often detached from society’s more pressing material needs – while taking a nice tax deduction in the process.

There were other ways to engage with the theme beyond becoming or deflecting it.

Some celebrities attempted to honor the under-recognized labor of immigrants and people of color during the period. Sound of Metal star Riz Ahmed wore a utilitarian set by 4S Designs, “an homage to the immigrant workers who kept the Gilded Age golden.” Sex and the City icon Sarah Jessica Parker wore a Christopher John Rodgers gown inspired by the oeuvre of “unsung” black seamstress Elizabeth Keckley, who designed for first lady Mary Todd Lincoln. And Bring It On actress Gabrielle Union pointed out her rubied hairpins, representing the “blood spilled” by people of color “during the accumulation of gross wealth by a few during the Gilded Age.” 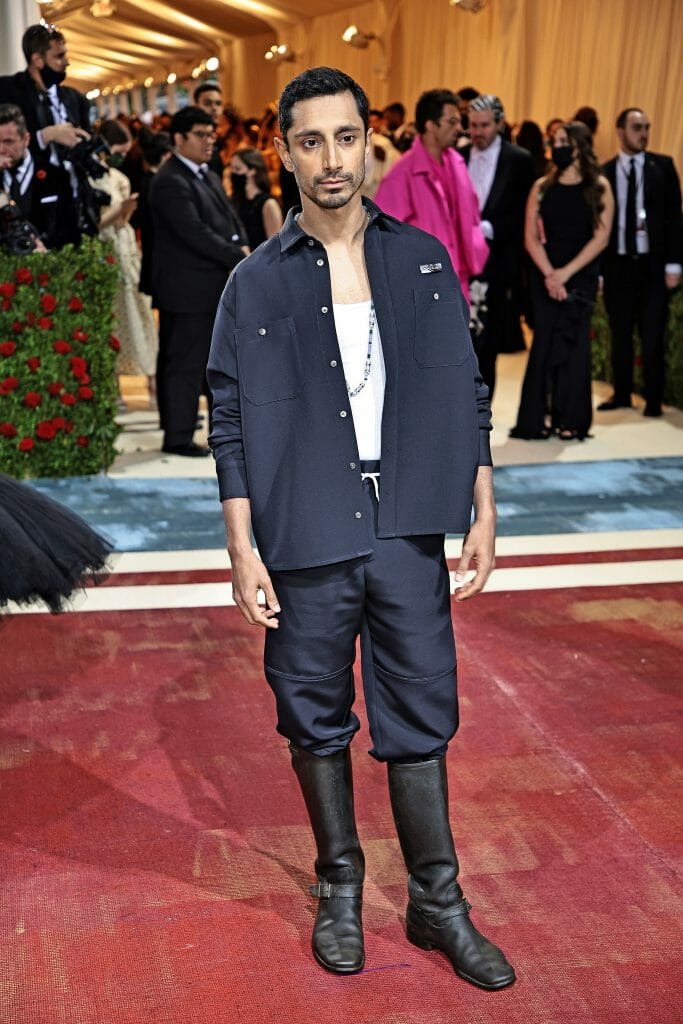 Then, there were the celebrities who weighed in on the climate crisis, accelerated by the fashion industry. UN research estimates that fashion is responsible for an estimated tenth of global carbon emissions and fifth of global wastewater, as well as millions of tons of textile and garment waste. So former partners Shawn Mendes and Camila Cabello opted for entirely upcycled designs by Tommy Hilfiger and Prabal Gurung, respectively. Her sustainable outfit, Cabello argued, harnessed the “innovation” and “ingenuity” of the “materialistic” era to address “today’s challenges.”

A Gen Z climate activist, Xiye Bastida, even accompanied comedian Amy Schumer to the gala, wearing Gabriela Hearst – though red carpet interviews consigned Bastida to vague mentions of how “climate justice” deserved airtime in the exclusive space while Schumer goofed off for the cameras. 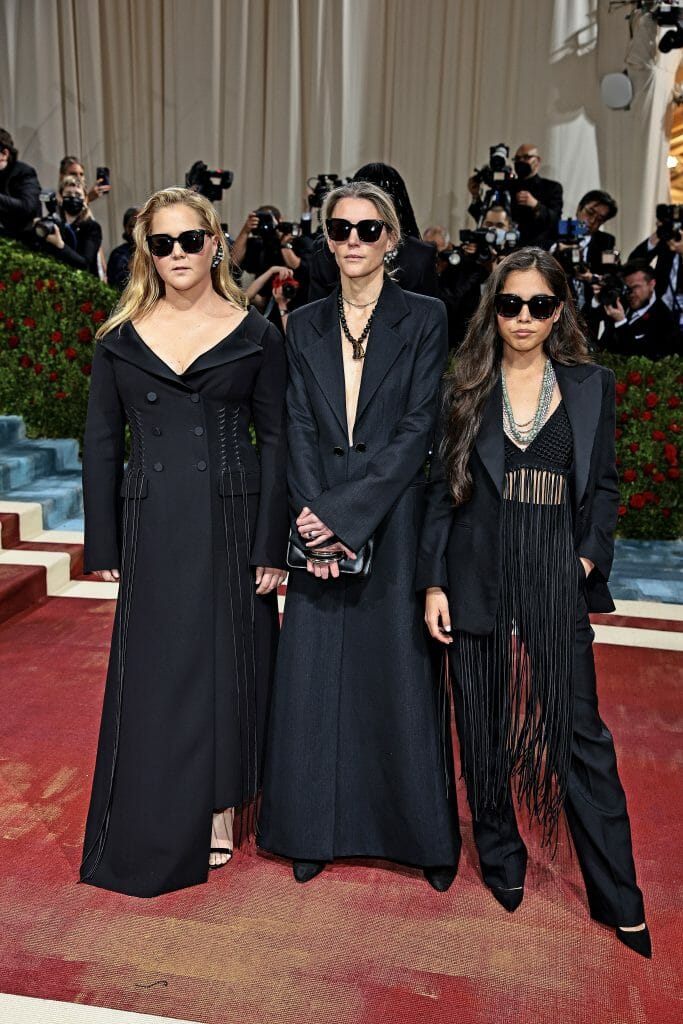 Heralding “inclusivity” as a hallmark of the era seemed to be gala attendees’ preferred way to broach the complicated theme. Gossip Girl star Blake Lively dressed as an oxidizing, Versace-rendered Statue of Liberty, whose bejeweled tiara represented “inclusivity, welcomeness, and freedom.” Billionaire and newly minted Twitter owner Elon Musk, in white tie, promised to make the platform as “inclusive as possible” to improve users’ lives.

To its workers, event sponsor Condé Nast has always undervalued the inclusivity that Met Gala guests were keen to emphasize. And during the event, the publisher had its employees work unpaid and uncredited extra hours to publish around-the-clock media coverage. That’s in part because, as Vogue Copy Director Grace Edquist attests, staffers “constantly feel at risk and in the dark, fearing for our jobs.”

In response to their company’s practice of “leveraging its prestige to overwork and underpay its employees,” Condé Nast workers joined to form a union across the publisher’s brands. The New Yorker magazine unionized first, winning a first agreement in June 2021 that included more equitable wages and raises, along with journalistic protections. Pitchfork, WIRED, and Ars Technica followed suit, until workers across the company banded together with the New York News Guild, which represents other publications across the city. The union, announced in late March, is still seeking recognition.

Learn more in our weekly newsletter

Utilizing the irony of the gala’s theme, members of the recently formed  released a spoof “Guilded Glamor” Vogue cover, foregrounding the potential power of the union to rectify company-wide abuses on its “Workers’ Longest Night.” “The Met Gala’s sparkle comes from our sweat,” the union stated in a press release, noting the legions of freelancers, assistants, and producers who struggle to pay rent as the publisher made $2 billion last year.

The Condé Nast Union aims to give credit where credit is due, with or without management’s recognition. After Vogue posted a video of Kardashian matriarch Kris Jenner getting ready for the gala, the union prepared a slide of credits for all the hardworking staff who went unmentioned in the final cut.

Tomorrow is a special day, so we thought we’d give you a special edition of THE ISSUES all about (you guessed it!) the Met Gala.

“Condé Nast has gotten away with so much—exploitation of the workforce, a racist culture, stagnant growth, and more—but it’s time for all of that to stop,” writes Elise Portale, a union member and Senior Social Media Manager at Architectural Digest. “We are tired of being overworked, underpaid, and completely burnt out by a company that chews up their best talent and spits them out again.”

During our current Gilded Age, workers are seizing that legacy, unionizing across concentrated industries at a rate not seen in decades: Amazon warehouses, Starbucks franchises, and media outlets are the new steel plants and railroad outfits. The work and its standards may look different, but exploitation persists. As was true in the 1890s, neglect, corruption, and strikebreaking are still customary in 21st-century workplaces. 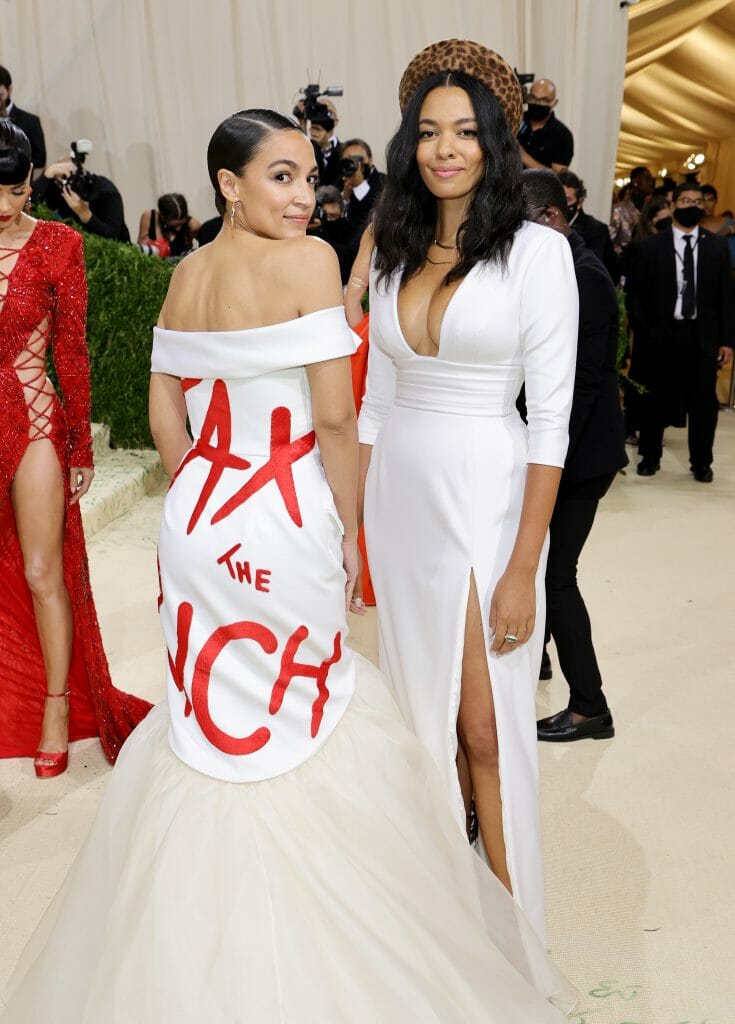 How effective can red carpet gestures be when inequality is in the air? After wearing an infamous, incendiary “TAX THE RICH” dress to last year’s gala, Rep. Alexandria Ocasio-Cortez (D-NY) asserted that her presence sparked “a conversation about Taxing the Rich in front of the very people who lobby against it, and punctured the 4th wall of excess and spectacle.” That the President himself now supports a billionaire’s tax is hard proof that such conversation has advanced, with or without AOC’s red carpet moment nudging it along.

In the end, no one can mistake well-intentioned sartorial statements with effective action. But celebrating conspicuous consumption and charitable giving – to an industry that thrives at the nexus of worker exploitation and environmental degradation – all while workers behind the scenes struggle for basic protections? That’s on theme.

The rich, famous, and powerful don’t have to do anything when they have all the resources – and can distract us with their glimmering clothes.

Why We Need a Black Worker Bill of Rights