The USA women’s soccer team—now three-time winners of the Women’s World Cup—made headlines this time around not just for their brilliant performance, but also for what their victory brought to light: the gender pay gap.

Some argue the gender pay gap in professional soccer is fair because the men’s World Cup brings in more money. Others say that women’s sports just aren’t as entertaining. But instead of simply accepting this reality, I can’t help but wonder: Shouldn’t we try to find a way to make pay for athletes equitable, regardless of gender? Shouldn’t we strive for women’s sports to be as valued as men’s, in terms of pay and also in terms of viewership? (And should any athletes, regardless of gender, be paid so much in the first place?)

Most famous female athletes make up for the gender pay gap by taking on sponsorships. Some even end up pursuing modeling careers. The very highest paid female soccer athletes, including the United States’ Alex Morgan, make only around a half million playing soccer. The highest paid men, in contrast, can earn more than $50 million for their salary and other winnings.

Women, then, make staggeringly less than what male players like Cristiano Ronaldo make simply for playing the game. While some men get much of their income from advertising as well, it is not on the same scale and tends to not be of the same proportion as women, who rely on this type of exposure for their income.

Morgan commented during an interview that “Scoring a goal in a World Cup was my dream as a little girl. I didn’t really dream of being in Maxim when I was 5.” Yet it is these very endorsements that have given her, and many other female athletes, the ability to keep up with male professionals. Comparing Alex Morgan with Manchester City player and England captain, Steph Houghton, this becomes apparent. 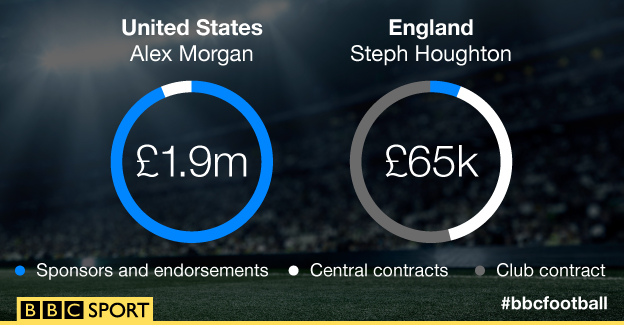 As the image shows, Morgan may be making more. But for what? Sponsorships and endorsements. These have contributed to her popularity, and have significantly increased her net worth. But she is not adequately compensated for being the talented athlete she worked so hard to become.

There are male players who get a lot of their income from advertising. Cristiano Ronaldo, a well known player (whether it be for his athletic ability or his underwear ads) has signed a contract that will now raise his pay for just playing to $52 million each year, making him the world’s highest paid active player. He makes quite a bit of money through advertising and endorsements – $28 million annually. But even with such staggering endorsement earnings, his income for playing is still higher. Ronaldo still makes more than Alex Morgan, or any other female player, for just playing soccer, all the while taking in an incredible amount for advertising.

Does female athletes’ apparent dependence on advertising and modeling lead to disrespect? Does it lead to sexist tweets such as Andy Benoit from Sports Illustrated tweeting that all women’s sports are “not worth watching” or comments like Stephen A. Smith’s saying that some of these athletes hold themselves back because they “might not have wanted to mess their hair up”?

Regardless of the reason—whether viewers care about women’s sports or seeing their favorite Maxim model compete—attention on female sporting events is growing. The 2015 Women’s World Cup Final match drew between 20-24 million viewers, making it the most watched soccer game in US history. This impressive amount fell just short of the 28 million who watched the NCAA Men’s Basketball Finals.

The women’s pay—and respect for them as athletes—should grow accordingly.

Why should any of us care about the gender pay gap in professional sports? The startling reality is that the gender gap in pay reaches far outside the sporting world. The American Association of University Women recently published a study showing that even when both genders’ levels of education and experience are the same, the gap remains. Women are paid 78 percent of what men are paid on average in nearly every occupation. It is even worse for women of color as Hispanic women make 54 percent of white men’s earnings and black women make 64 percent of white men’s earnings. Motherhood, likelihood of working in low-paying industries, the hesitancy of women to ask for promotions, and discrimination are all thought to play a role in contributing to this disparity.

In the sports world, pay equality is growing in some areas, like tennis. As professional sporting brings in a ridiculous amount of money in general, we should find a way to invest more in our female athletes and pay them the same as their male counterparts.

Women athletes work just as hard as men. They shouldn’t have to become Maxim models to prove their worth.

Kelsey Clark is an intern at the Institute for Policy Studies. She is also a soccer player at the College of Wooster.

What Obama Can Learn From Scotland

As the Scots begin tackling their rising incarceration problem, America should learn from them.