Gender Justice at the Heart of the Poor People’s Campaign

The campaign's first week of nonviolent moral direct actions will shine a spotlight on the problems of women in poverty.

The Poor People’s Campaign: A National Call for Moral Revival, will begin six weeks of actions on May 13 in more than 30 state capitals. Each week will have a different theme, with the first week dedicated to raising up “Children, Women, and People with Disabilities in Poverty.”

In a recent interview, Rev. Liz Theoharis explained that when she and fellow campaign co-chair Rev. William Barber II first began developing this initiative, they mapped out the poorest communities in the United States. “Our research revealed that the states with the highest overall poverty rates also had the worst voter suppression and the highest number of women and children in need,” she said.

The campaign teamed up with the Institute for Policy Studies to conduct an extensive audit of key indicators since Dr. Martin Luther King and other leaders launched the original Poor People’s Campaign in 1968. The report, organized around the themes of poverty, systemic racism, militarism, and ecological destruction, integrates issues related to gender justice throughout. Here are five charts which show that while poverty affects all demographic groups in the United States, women (especially women of color) and transgender individuals are particularly hard hit. 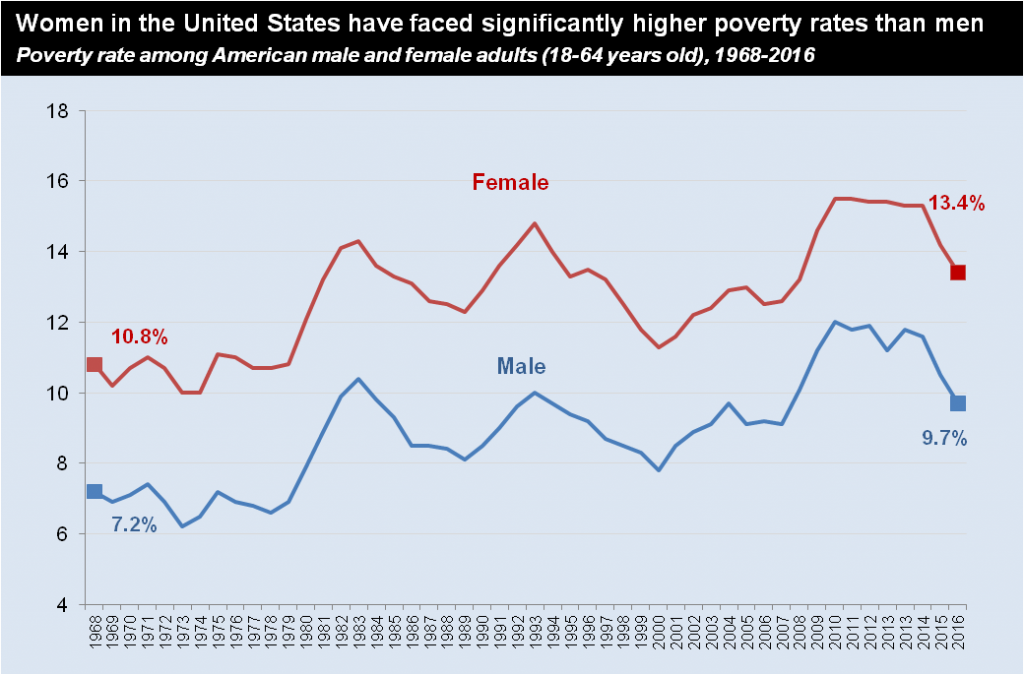 Even though women’s share of the workforce has increased dramatically, the gender poverty gap is even wider today than during the 1968 Poor People’s Campaign. Back then, 10.8 percent of women aged 18-64 (representing 6.1 million women) and 7.2 percent of men (3.7 million) in this age group were below the poverty line. In 2016, 13.4 percent of women in this age group (representing 13.4 million women) were living below the poverty rate, compared to 9.7 percent of adult men (9.4 million men). The poverty threshold for a single person in 2016 was $11,880 in annual income.

Households led by single women with children had a poverty rate of 35.6 percent in 2016 — more than twice the 17.3 percent rate for households led by single men with children, according to the National Women’s Law Center. Poverty is a particularly acute problem for women of color, affecting 21.4 percent of Black women, 18.7 percent of Latinas, and 22.8 percent of Native American women, compared to the national poverty rate of 12.7 percent. 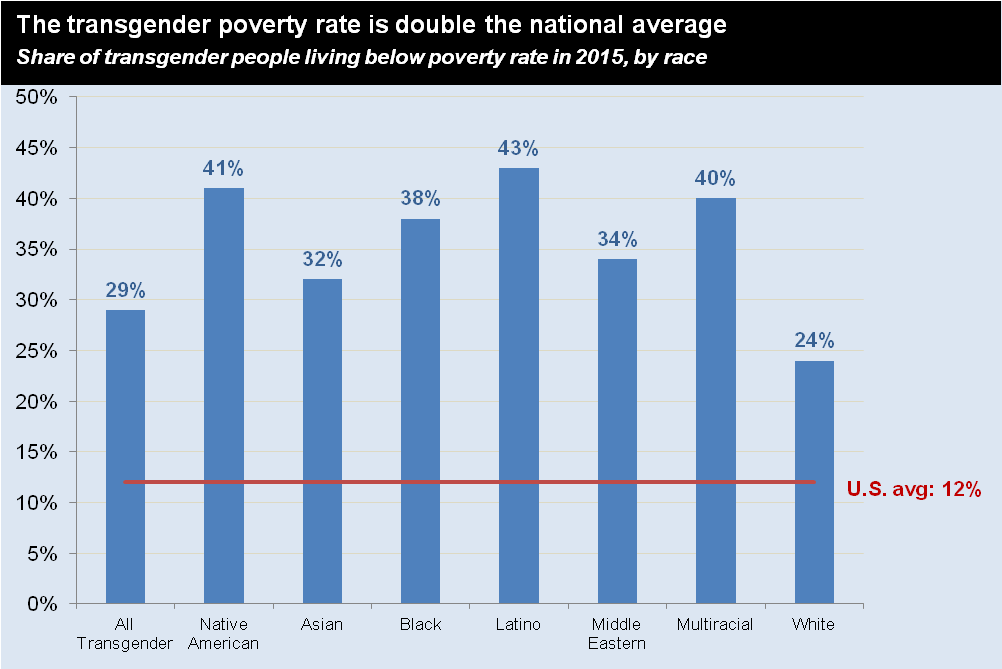 Transgender Americans experience poverty at a rate double that of the general population, with transgender people of color experiencing even higher rates. The National Center for Transgender Equality found that 43 percent of Latino, 41 percent of Native American, 40 percent of multiracial, and 38 percent of Black transgender respondents lived in poverty in 2015. Thirty percent of respondents reported being homeless at least once in their lifetimes. 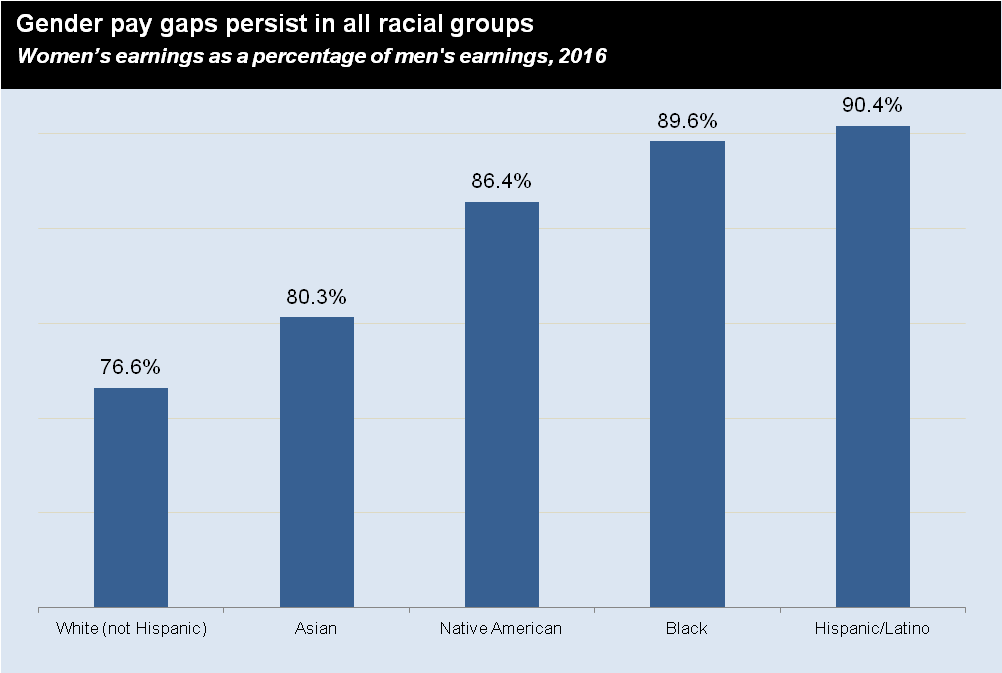 Women’s higher poverty rate is related in part to the country’s persistent gender pay gap. In 2016, white women’s average earnings were just 77 percent of white men’s average earnings and Asian women made just slightly more than 80 percent of Asian men’s pay. The gender gaps are narrower within Black, Native American, and Latino groups — not because women in these racial groups have made faster progress towards equity but because average pay for men in these groups falls far below that of white and Asian men. 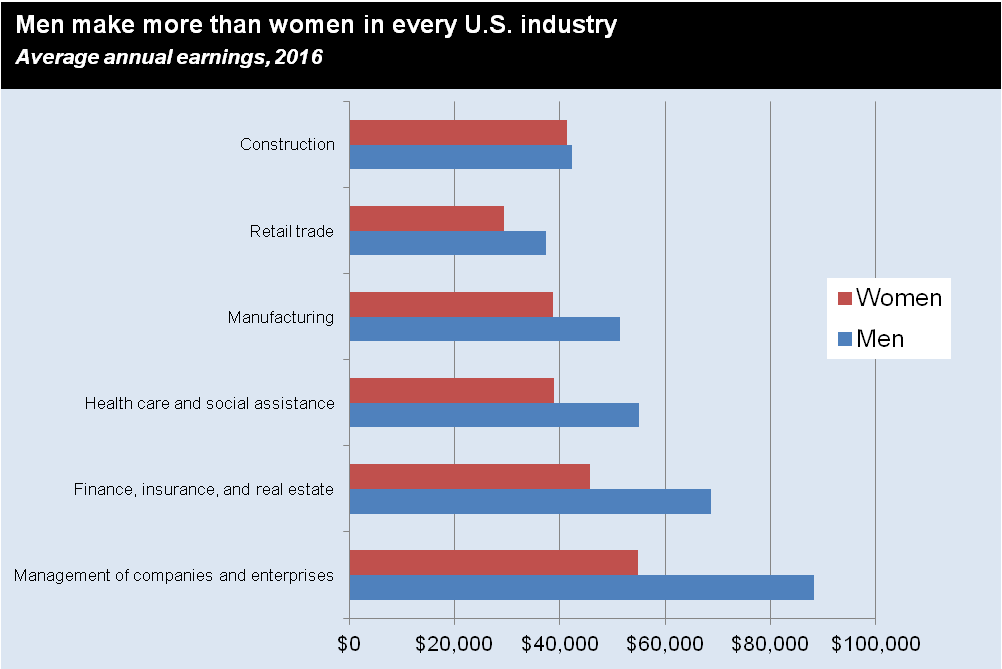 American women earn less than men, on average, in all industries. The largest pay gaps are in management positions, where men made $88,000 on average in 2016, compared to just $55,000 for women. The smallest gap is in the construction sector, but women make up only 9 percent of workers in this industry. 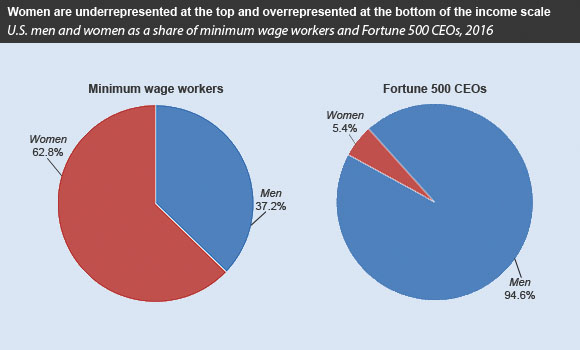 Part of the explanation for the gender pay gap is that women are overrepresented in low-wage jobs while they are underrepresented in high-paying positions. For example, women make up 63 percent of U.S. workers making the federal minimum wage or less per hour while they represent only 5 percent of CEOs at Fortune 500 firms. The U.S. Congress has not passed a raise in the minimum wage for more than a decade.

These are just a handful of indicators of the structural sexism that persists in America, despite the tremendous gains women have made in many areas since the 1968 Poor People’s Campaign. And as if these numbers weren’t reason enough to protest, House Republicans have just added to the campaign’s urgency. Their recently proposed Farm Bill would reduce or eliminate SNAP food assistance for 2 million people, more than 60 percent of whom are women.

Congress Made It Harder to Give Teachers Raises