A leading Black worker advocate calls on policymakers to understand that what benefits Black workers, benefits us all.

President Joe Biden’s Covid relief proposal would raise the wage floor for all U.S. workers and give a particularly long overdue raise to restaurant servers, taxi drivers, manicurists, and other tipped workers.

For Black worker advocate Tanya Wallace-Gobern, getting rid of the subminimum wage for tipped workers is a matter of racial justice.

“If we are committed to ending systemic racism in the workplace, passing a living wage bill for tipped and non-tipped low-wage workers is essential to reducing inequality,” she said in a recent briefing.

As the Executive Director of the National Black Worker Center Project, Wallace-Gobern oversees a network of eight centers across the country that aim to build power and transform working conditions for Black workers. The subminimum federal wage for tipped workers, which has been stuck at $2.13 since 1991, is a clear barrier to their goals. 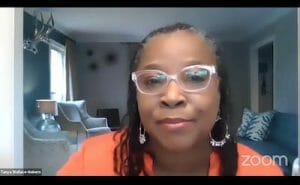 While employers are technically supposed to make up the difference if workers don’t earn enough in tips to reach the current $7.25 federal minimum, this rule is largely unenforced. And studies have long found a racial bias in tipping.

Eliminating the subminimum tipped wage would also eliminate a shameful relic of slavery. Tipping became prevalent in the United States after the Civil War, when restaurants and railway companies embraced the practice because it meant they didn’t have to pay wages to recently freed slaves.

That past hangs heavily over many Black workers.

“Let’s face it,” Wallace-Gobern told Inequality.org, “50 years after President Lyndon B. Johnson declared a war on poverty, Black people in the South still contend with economic hardships, persistent poverty, and the enduring legacy of slavery. We believe that in order for there to be justice for all workers, we must expand the capacity of Black workers, and for us that means that our work has to be concentrated in the South.”

Currently based in Raleigh, North Carolina, Wallace-Gobern began her organizing work in Chicago as a student at Loyola University. Her work on a range of racial justice issues, from combatting racist stereotypes and attacks on Black students to fighting for Black professors to receive tenure, caught the eye of labor movement recruiters. When they offered her a job, she said she would only do it if she could organize Black people — and Black women in particular.

“Black workers are the canaries in the economic coalmine of our country,” Wallace-Gobern told Inequality.org. “When the canary died, that was a signal that the conditions were bad for the miners. That’s the role Black workers play. If you improve their working conditions, that will lift all workers.”

She became the first executive director of National Black Worker Center Project three years ago, after stints with the Amalgamated Clothing and Textile Workers Union (a predecessor of UNITE HERE), the AFL-CIO’s Historical Black College Recruitment program, and the Coalition of Kaiser Permanente Unions. 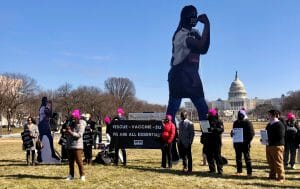 Wallace-Gobern’s aim now is to strengthen the capacity of Black worker centers to win progressive policies like minimum wage increases, build up a cadre of Civil Rights 2.0 organizers, and advance a Southern strategy on racial justice and democratic freedoms.

The challenges are many. Particularly in the south, worker advocates are up against anti-union “right to work” laws and “pre-emption” restrictions that block cities from improving labor protections at the local level.

But Wallace-Gobern is optimistic about the future.

“Young people are not turning their back on the legacy of the civil rights movement, but they are ready to lead if we step aside and give them space,” she remarked. “I welcome the opportunity for them to stand on our shoulders and take us to heights that I and my grandparents could never imagine.”

Rebekah Entralgo is the Managing Editor of Inequality.org.

The Rich and Those Who Serve Them, Then and Now