A decade after a reckless bonus culture crashed the economy, Wall Street titans still rake in massive paychecks while many of their employees struggle to make ends meet.

For the first time in a decade, CEOs of America’s mega-banks were summoned to Capitol Hill on April 10 to face scrutiny from lawmakers. House Financial Services Committee Chair Maxine Waters (D-Calif.) explained that her goal was to find out what — if anything — the seven Wall Street leaders had learned since the 2008 financial crisis.

The executives’ own paychecks featured prominently in the questioning — for good reason. The financial industry’s out-of-control pay practices were a key factor in the reckless behavior that led to the crash. Having massive jackpots sitting on the table, with little or no downside risk, gave bank executives a powerful incentive to make outrageous gambles that put us all in danger.

A decade later, the big rewards for bad behavior continue. Waters pointed out that the big banks have had to fork out at least $163.7 billion in fines over the past decade for consumer abuses and other violations of the law. Meanwhile, Wall Street CEOs continue to perch near the top of compensation rankings. 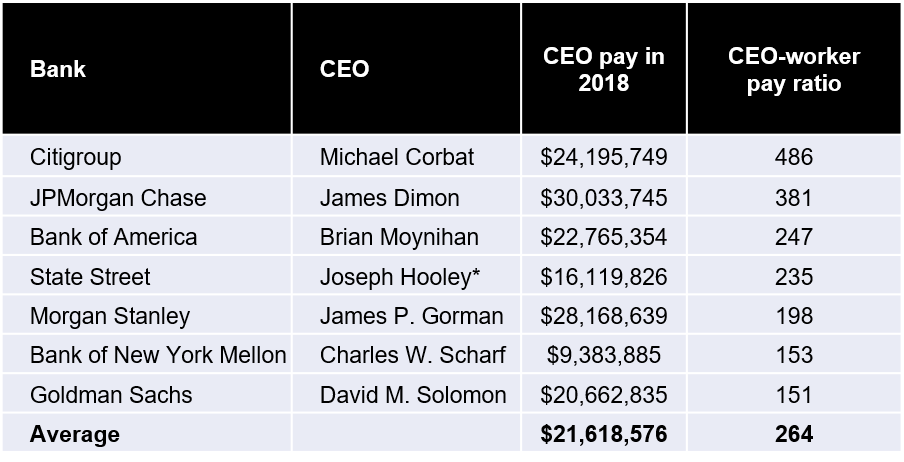 In a fearless grilling of the Wall Street heavyweight, first-term California Democrat Katie Porter, a former consumer protection attorney, skewered Dimon for pocketing such a massive sum while paying his entry-level employees poverty wages. Using the example of one of her constituents, a single mom earning $16.50 an hour as a JPMorgan Chase teller, she pressed Dimon for solutions to the woman’s household budget shortfall.

“I don’t know, I’d have to think about that,” Dimon admitted.

“What I’d like you to do,” Porter scolded, “is provide a way for families to make ends meet, so that little kids who are six years old living in a one-bedroom apartment with their mother aren’t going hungry at night because they’re $567 short.”

.@RepKatiePorter lays out how a single mom making $16.50 at a Chase branch in Irvine CA would have a $500+ budget shortfall, even renting a below-market rate 1 bedroom apt w/ her kid

“I don’t know, I’d have to think about it” pic.twitter.com/PMDlykkeyb

Citigroup CEO Michael Corbat stands out among the group for having the largest gap between his pay and that of the typical employee at the bank.  Last year, he pocketed $24.2 million — 486 times more than median pay at Citi of $49,766. Corbat squirmed under intense questioning from New York Democrat Nydia Velázquez about this pay disparity. When he attempted to shift responsibility onto his board, Velázquez was having none of it. “Just unbelievable,” she said, shaking her head in disgust.

Rep @NydiaVelazquez asks the @Citi CEO if he thinks it’s fair that he makes $486 for every $1 a median worker at #Citi makes.

Corbat: “my compensation is decided by the board”

Velasquez: “If you’re not happy with the pay ratio, lower your salary or raise the salary of others” pic.twitter.com/fUp4oMY4uj

One Wall Street titan was happy about the hearing — or at least happy not to be among those brought before the klieglights. Lloyd Blankfein, who became a billionaire as the CEO of Goldman Sachs before retiring last year, trolled his former counterparts before the testimony began, sarcastically commenting, “Boy, I really miss my old job!!!”

In a preemptive move, Bank of America announced before the hearing that it would raise their U.S. bank employees’ minimum wage to $20 an hour in the next two years, up from the current $15. With the tightening labor market, other banks are likely to boost starting pay as well.

But on the CEO end of the pay gaps, much more needs to be done to rein in the excess. Policymakers should push regulators to finally implement the banker pay restrictions in the 2010 Dodd-Frank financial reform legislation. For nine years now, powerful Wall Street lobbyists have succeeded in blocking Section 956 of that law, which prohibits financial industry pay packages that encourage “inappropriate risks.” Regulators were supposed to implement this new rule within nine months of the law’s passage.

Lawmakers should also support growing efforts to use tax policy to encourage banks and big corporations to narrow their pay gaps. One model already in force in Portland, Oregon slaps a 10 percent surtax on companies that pay their CEO more than 100 times median worker pay. The gaps at all the mega-banks exceed that level. The tax penalty rises to 25 percent for firms with pay ratios greater than 250 to 1.

Such proposals have been introduced in seven states and the U.S. Congress. As a new Roosevelt Institute report puts it, these taxes send “a clear message that local governments — and the federal government — can use this pay ratio as a powerful tool in highlighting bad governance decisions that harm workers and our economy.”

Sarah Anderson directs the Global Economy Project and co-edits Inequality.org at the Institute for Policy Studies.

Plutocracies as Problem-Solvers (for the Privileged)