The Hollywood actor spoke at an Evanston townhall in support of a new policy to use revenue from marijuana legalization to narrow racial economic gaps.

Earlier this year, the actor Danny Glover joined author Ta-Nehisi Coates for a Capitol Hill hearing on slavery reparations. That was a historic milestone in the fight for a federal commission to study how America could best make amends for slavery.

But as is the case on so many issues, local officials are far ahead of Washington politicians on reparations.

And so Glover was eager to testify on reparations again this week — this time in support of a municipal policy that’s actually about to go into force.

In front of an overflowing crowd in Evanston, Illinois, Glover lent his star power to promote a new 3 percent tax on marijuana sales that will be used as a form of reparations to lift up the Chicago suburb’s black residents.

“This is the most intense conversation, I believe, that we’re going to have in the 21st century, right here — reparations,” Glover told the audience. He described the town’s reparations fund as “a remarkable step.”

Evanston’s innovative policy became possible after the Illinois state legislature legalized recreational marijuana this past June. The state was not the first to take this step — it follows 10 other states and the District of Columbia (along with U.S. territories of Guam and the Northern Marianas Islands)

But Illinois was the first state where legalization resulted from a legislative process rather than through a direct ballot initiative. Earlier states had to use direct voter initiatives since politicians were too frightened to stick their necks out on this issue, for fear they’d appear “soft on drugs.” 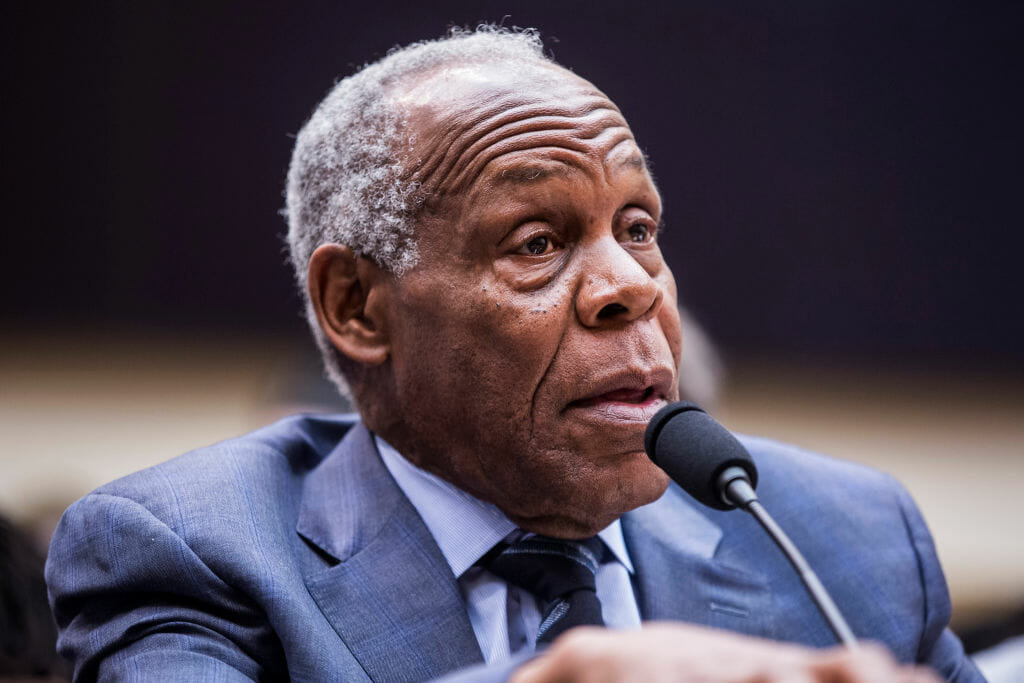 Danny Glover testifying on slavery reparations before the House Judiciary Subcommittee on the Constitution, Civil Rights and Civil Liberties on June 19, 2019. (Photo by Zach Gibson/Getty Images)

By going the legislative route, Illinois lawmakers were able to put more thought into how to use legalization to address the racist impacts of cannabis criminalization, under which African Americans have been much more heavily policed, prosecuted, convicted, and imprisoned than whites. The state law (which mirrors cities like Boston, Oakland, and Portland) includes a program for Social Equity Applicants so that communities historically hardest hit by criminalization would have a chance to participate in and profit from the legal cannabis industry.

In November, the council overwhelmingly voted to become the first jurisdiction to use local taxes on marijuana sales for a reparations fund to combat the legacy of slavery. While local officials are still hammering out the details of how the funds will be allocated, the aim is to help black residents afford to stay in Evanston (gentrification has already cut their share of the population from 22.5 percent in 2000 to 16.9 percent in 2017) while also funding job training and other initiatives. The funds will amount to $10 million over a decade.

In a similar move, Brookline, Massachusetts approved a plan on December 12 to funnel revenue from marijuana sales into an Economic-Equity Advancement Fund.

Glover’s appearance at the December 11 Evanston townhall came about as part of his involvement with the National African American Reparations Commission, a group of distinguished leaders committed to reparatory justice. He also takes time away from his Hollywood career to serve on several boards of social justice organizations, including the Institute for Policy Studies, and support human rights causes around the world.

For their leadership on reparations, Glover said the Evanston city council and grassroots advocates “will be remembered, as they stood up in the face of condemnation, for not only their own humanity, but the humanity of all people.”

Sarah Anderson directs the Global Economy Project and Sanho Tree directs the Drug Policy Project at the Institute for Policy Studies. Follow them at @SarahDAnderson1 and @SanhoTree.

The Hollywood actor spoke at an Evanston townhall in support of a new policy to use revenue from marijuana legalization to narrow racial economic gaps.