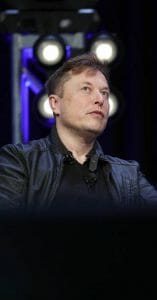 “Dumb” concern about the coronavirus, Musk had raged with that shutdown impending, had morphed into a useless “panic.” On March 19, the day he reluctantly closed his Fremont plant, Musk confidently predicted new Covid-19 cases would be running “probably close to zero” by the end of April.

At the end of April, that zero nowhere to be seen, Musk doubled down on his bluster. He promoted a video so full of coronavirus misinformation that YouTube took it down.  Musk would become even more desperate when county officials announced plans to extend their original shelter-in-place orders.

“This is fascist. This is not democratic. This is not freedom,” Musk stormed in an April 30 conference call with business journalists and investors. “Give people back their goddamn freedom.”

Musk would go on to sue Alameda County for the shutdown, trash the county’s top health officer as “unelected & ignorant,” and declare his intention to yank Telsa out of California.

This past Monday, the confrontation finally climaxed. Musk announced his Fremont plant would reopen — with him in it.

“Tesla is restarting production today against Alameda County rules,” Musk tweeted. “I will be on the line with everyone else. If anyone is arrested, I ask that it only be me.”

Nobody stopped the workers streaming into his plant either. The workers, to be sure, weren’t entering in solidarity with their hyperventilating boss. Quite the opposite. They had good reason to suspect anything Musk might have to say safety-related. Within the auto industry, Musk’s Tesla has become notorious for operating in wanton disregard of safety standards. Safety violations at the Fremont plant, Forbes reported last year, have “dwarfed” the violation totals at other big American auto plants.

So why, given Tesla’s sorry safety record, did workers go back to work when the company’s own Return to Work playbook offered no gameplan for testing returning employees for the coronavirus?

The simple reason: The workers at the Fremont plant didn’t have much choice. If they didn’t return, a Tesla email informed them, they would go on “unpaid leave” status. And they also, Tesla not so subtly threatened, could find themselves losing their state unemployment benefits.

Musk had, in effect, forced Tesla workers into the same lose-lose bind that faces meatpacking workers in states like Nebraska. Return to work, put your health in jeopardy, and make your rich employers richer or shelter in, keep yourself and your family safe, and go hungry.

Elon Musk, meanwhile, now sees nothing but win-win everywhere he looks. America’s billionaires, he has demonstrated, can do whatever they want. They stand above the law. Musk himself is facing no apparent consequences for defying public authorities on the reopening of the Fremont plant. His triumph has been complete.

Not just for cattle anymore

But why did reopening that plant matter so much to Musk? Why did he feel so compelled to directly challenge civil authority in the middle of a pandemic?

We don’t have to guess why. We just need to look at the historic — and widely celebrated — pay deal that Musk brokered with Tesla a bit over two years ago.

This March 2018 agreement lavishes upon Musk a series of stock option awards that will kick in over a decade-long span if Tesla’s “market capitalization” — the sum value of the company’s shares — hits a dozen ambitious predetermined targets. That market cap stood at nearly $59 billion when Musk signed his pay deal. To collect on the deal’s total enormous incentive jackpot — an estimated $55 billion — Musk would have to grow Tesla’s market cap by over ten-fold, to $650 billion.

If Musk pulls that off, one auto industry trade journal noted after the pay deal’s unveiling, the options Musk would pocket would likely make him “the richest man in the world by a massive margin.”

Other observers scoffed at that possibility. The world’s seven largest automakers, they pointed out, together held a combined market value of just $575 billion. Musk’s pay deal, critics charged, merely amounted to another of his flashy publicity stunts.

Musk and his fanboys didn’t see things that way. True, Tesla had never shown an ability to operate profitably, and, yes, the Tesla market value would have to skyrocket in a relatively short amount of time. But Amazon, Domino’s Pizza, and Netflix had all registered leaps as proportionately grand as the Tesla pay deal envisioned. Tesla could make that leap, too.

By the end of 2019, some serious leaping had begun, as Tesla registered its first quarterly profits. Then, three weeks into 2020, Musk reached his pay deal’s first incentive threshold when Tesla shares closed at over $569 a share. That price nudged the company’s total market value over $100 billion.

But Musk, under his pay deal’s terms, didn’t just have to hit that $100-billion market-cap target. He had to keep Tesla’s average market value above $100 billion over a six-month span. That didn’t seem to pose any problem — until the coronavirus hit and threatened to shut down Tesla’s Fremont plant.

For Musk, a shutdown couldn’t have come at a more inopportune time. The company was just ramping up its new Model Y sport utility vehicle. Without a successful Model Y, Tesla’s share price could tank and Musk could lose out on the biggest executive pay windfall in global corporate history.

CEOs Say They Care About Us

Here's how to tell if they're lying

The Tesla shares, in the end, didn’t tank. Musk’s all-out offensive against California public health officials, his enthusiastic willingness to subject Tesla workers to corona risk, stiffened the spine of Tesla investors. On May 4, Tesla shares closed at $761, a price high enough to bring the company’s 60-day average market capitalization over $100 billion. Reaching that milestone triggered the first batch of stock options in Musk’s pay deal.

The options gave Musk the right to buy Tesla shares at the company’s $350 January 2018 share price. He could hang on to the shares or turn around and sell them at the $761 May 4 closing price. Either way, Musk’s personal net worth would stand $700 million higher.

Musk now has eight more years to clear his pay deal’s next 11 “valuation hurdles.” If he clears them all, the value of his personal Tesla stock holdings could total over $200 billion.

Should the rest of us care about any of this? Only if we value the difference between democracy and real-life fascism, a difference that Musk so recklessly clouded when he hollered “fascist” at public health officials just trying to keep Americans safe.

Musk’s successful bullying has vividly revealed that our duly elected leaders and the governments they lead cannot, when push comes to shove, adequately safeguard the health and well-being of average working people. Democracy cannot work particularly well — or endure particularly long — when those we elect cannot protect us from the wealthy and powerful who loom large so high above us.

Fascism, by contrast, feasts on such moments.

Reopening the Economy a Death Sentence for Workers