In a small city in northern New England, one local nonprofit mobilizes to meet the Covid-19 crisis in its New American community.

When Covid-19 shuttered schools and businesses in Manchester, New Hampshire in March, Mary Georges was not at home.

“I was in New Jersey,” she explains, which left case manager Junior Munzimi to make some quick decisions.  Munzimi hurried to Manchester’s Central High School, where he, Georges, and their organization, Victory Women of Vision, were still in the early weeks of their new afterschool Youth Mentoring Program.  He returned to the Victory Women office with the program materials they normally kept at school safely retrieved and an idea in mind.

“He called, ‘What are we gonna do?’” Georges recalls.  “He said […] ‘We can just try to do this online, like online classes,’ and we reach out to […] the coordinator at Central High School.  We just ask her if we can do this with our kids.  She said that is a good idea!  And we set up the online classes on Google Hangouts with the kids.”  Georges beams as she speaks.  “And you cannot imagine.”

The high schoolers of whom Georges speaks are part of a community known in Manchester as New Americans.  They come to this small city, once a northern New England mill town, as immigrants and refugees from countries all over the world.  Some, like Georges, hail from the Democratic Republic of the Congo; many arrive from other parts of Africa, or even further afield; all are facing a total upheaval in their lives that most Americans could never imagine – though Covid might give us a taste.

Georges, the founder and Executive Director of Victory Women of Vision, has made a career of serving New Americans like herself.  She started the nonprofit over 10 years ago, first as a religious organization, then as a broader resource for the growing community of New Americans in the greater Manchester area.  With minimal funding and countless unpaid hours of work, Georges and her team have mentored many over the years, leaving a trail of college graduates, community leaders, and thriving cross-cultural Americans in their wake.

Today, Victory Women serves, by Georges’ estimate, 120 families as their main source of economic, educational, and, perhaps most importantly, emotional support in their new country.  The organization is often the first point of contact for anyone who needs a hand navigating life as a New American, helping them learn English, succeed in school, find jobs, apply for citizenship, even fill out the Census.

But their purpose is often tender, too – when it came to Georges’ attention that there were many older members of the New American community struggling with loneliness and depression in their new homes, she and her team formed a knitting group.  Led by board member Dr. Betsy Clardy, the elders’ knitting group is a staple of Victory Women programming today, providing a space for older women to gather every week, enjoy snacks and coffee, knit up a storm, and just chat (often in all different languages, but never without understanding each other).  The product of all this knitting is a pile of hats, scarves, and more that fills up a corner of the Victory Women office until Dr. Betsy, as she’s known to the elders, leads another field trip around the city to donate their work to local hospitals, schools, and other charities. 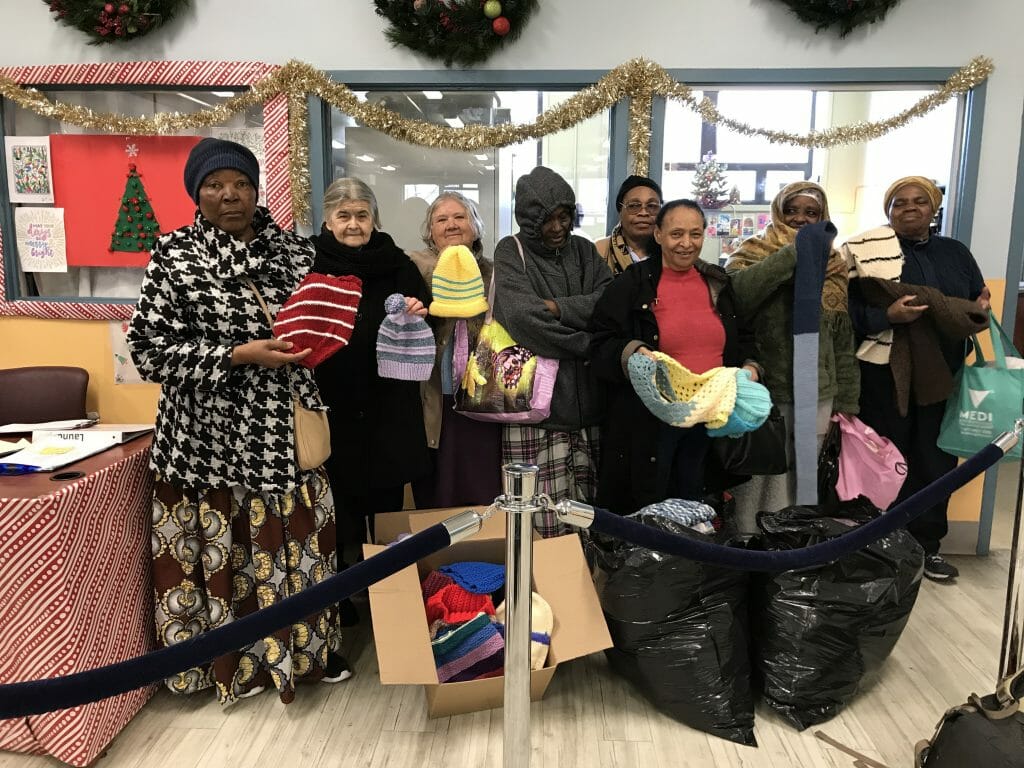 The elders’ knitting group delivers their handmade hats and scarves to a local charity in Manchester, NH. Photo courtesy of Dr. Clardy.

Since the Covid-19 pandemic took hold, however, the Victory Women offices have gone quiet – but only by their usual standard.  The once bustling space is now the headquarters of a new mission: helping the New American community navigate a national crisis.  The elders no longer fill the office with their laughter on Wednesday mornings, but Victory Women is still there, taking calls from concerned parents, directing food and supplies to those in need, and emerging as a vital resource in the effort to direct charitable funds and CARES Act money to the New American community.

This is the “silver lining” of the Covid-19 pandemic, says Dr. Clardy.  Victory Women is a small nonprofit and a true labor of love that has only recently begun to seek significant funding for its work.  “There are a lot of organizations trying to help support low-income people,” Dr. Clardy says.  “And they’re seeing Victory Women as a good partner to work with.”

Since March, the organization has been the recipient of several small grants made possible by the CARES Act from larger organizations like United Way and the New Hampshire Charitable Foundation.  “That’s money that probably wouldn’t have been there if it hadn’t been for Covid,” Dr. Clardy says, and it’s making a big difference in Victory Women’s efforts to support the New American community through these challenging times.

Grants like these have allowed Victory Women to bring on additional help with case management, which has become the increasing focus of Georges’ and Munzimi’s work.  The elders who once gathered at the Victory Women office every Wednesday are now stuck at home, feeling lonely once again.  “But we didn’t leave them!” Georges says.  Though they cannot meet in person, the elders get a call every Wednesday from Aziza Ali, the Victory Women office manager, who checks in on them and reports back to Georges if they need food, masks, sanitizer, or other supplies.  Others in the office help to deliver these items and check up on community members in person.

Meanwhile, Munzimi and board member Margaret Hosmer Martens, a longtime volunteer who teaches cross-cultural leadership classes at Victory Women, have looked after the kids in the Youth Mentoring Program, providing essential support as Manchester schools closed and learning went virtual.  The program, which is backed by a grant from the New Hampshire Department of Health and Human Services (NH DHHS), joins New American students with volunteer mentors from the New American community to help ease the transition to school and daily life in the United States.

Many kids in the New American community struggled to adjust to digital learning, Georges says, reflecting on a call she received from a newly unemployed single parent wondering how she was going to help her child with school when the more immediate concern was how to keep her child fed.

“It was hard to educate them by using the virtual tools and having them attend the program virtually,” Munzimi says.  But he believes the all-digital program went well in the end.

In some ways, the program went even better online than it did in person: Martens notes that before the pandemic, many of the kids in the program were only able to attend one of the two weekdays on which the program was held.  Once they went virtual, those kids were able to attend both days, and “We ended up with 10 sort of hardcore kids who came each time,” Martens says.  “They came until mid-June and they were very faithful.”

Martens, who played a key role in developing the curriculum for the program, was also quick to think of new ways to engage the kids online.  In an era wrought with “Zoom burnout,” Martens sought to overcome the social limits of video chatting by encouraging the program’s mentors to supplement her teaching with stories from their own lives.  “They talked about their experiences with culture shock,” she says, as well as the importance of celebrating their culture and traditions even as they adjusted to American norms.  “It makes a big difference,” Martens says, “Because they’re so enthusiastic about it, about sharing with these kids.”

In June, the kids concluded the program with a group project on a subject of their choice that was important to them.  In the shadow of George Floyd’s death, the kids chose to talk about racism.  They met online, divided the work, and put together a presentation on how to address racism in their school.  This led to a meeting with one of their teachers and their school principal, who were impressed – so much so, Martens says, that they asked Victory Women to lead an advanced program that would allow these kids to continue their work in the fall. 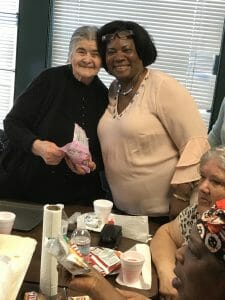 Georges (right) with a member of the elders’ knitting group. Photo courtesy of Dr. Clardy. 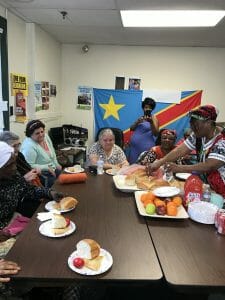 At the beginning of the program, many of the kids participating weren’t speaking, Georges says.  But by the end, everything changed: they were talking and asking questions.  “They’re now gonna imagine,” Georges says with pride.  “That’s what was really impressive for this group.”

Now, some of the kids who completed the mentoring program are reaping their reward: driver’s ed., paid for in full by Victory Women.  In a rural state like New Hampshire, a driver’s license is a key to a great many freedoms, including job opportunities.

The future, of course, is uncertain.  With Manchester schools planning to open remotely this fall, the next cohort of mentees will begin the Youth Mentoring Program online, which makes connecting on a personal level difficult.  The elders’ knitting group is likely to remain apart for some time yet as the country continues to battle rising rates of Covid infections.  And with the CARES Act in the rearview mirror and the next stimulus package looking hazy, funding continues to present a challenge.

Nonetheless, everyone at Victory Women is confident in their resolve as an organization.

“Victory Women is able to navigate in all different, difficult situations, and find ways on how to reach out to its community and serve its community,” Munzimi says.

“Victory Women forms relationships with everyone, and we don’t let go,” Martens says, adding that “Vision, relationship building, and perseverance” are what keep this little nonprofit marching forward through hard times.

“We are really trusted by the community,” Georges says, and that trust is integral to the success of Victory Women.  “They call us because there is trust, and they see too who we are: we work with compassion,” Georges says, “And we have love with our people.”

It’s this commitment to community, to trust and compassion, to vision, relationships, and perseverance that makes Victory Women of Vision work.  Remarkably, in an impersonal era of Googling and social media, Victory Women still finds most of its allies and new community members by good old fashioned word of mouth – a system that works well for an organization that values personal connection above all else.  As Georges says with pride, if you help one person, then they’re going to know exactly what to say when their friend needs a hand too:

“Oh you have a problem?  Call the Victory Women!”

Sophia Paslaski is a writer on the IPS Inequality team in Boston. She is based in New Hampshire.

In a small city in northern New England, one local nonprofit mobilizes to meet the Covid-19 crisis in its New American community.

Access to essential medications should not be subject to the whims of our employers.

The net worth of eight American billionaires — the 'pandemic profiteers' — surged by over $1 billion in 2020.

How to Hide a Fortune During a Pandemic

Are Postal Service Cuts Motivated by Voter Suppression or Privatization — or Both?