Cable TV Ignores Inequality; Here’s How to Get Around It

If you saw even a single Bernie Sanders speech during his insurgent 2016 presidential bid, or during his 30 years in public office prior, you know he’s worried about rising economic inequality.

The big question he wants to know is, why aren’t you just as worried?

The Vermont senator recently assembled a panel of some of the brightest luminaries from government, entertainment and academia to take on this issue. They brought forward serious, sober and concrete ideas on what’s causing our growing economic divide and what we can do about it. More than 1.7 million viewers tuned in for the event, streamed on Facebook Live, with tens of thousands more watching it later.

“Three men have more wealth than the bottom half of the country combined,” Sanders said in his opening monologue, citing the Billionaire Bonanza 2017 report I co-authored for the Institute for Policy Studies. It was one of a cavalcade of statistics from Sanders and the other speakers showcasing extreme concentration of wealth at the top and rising poverty at the bottom. 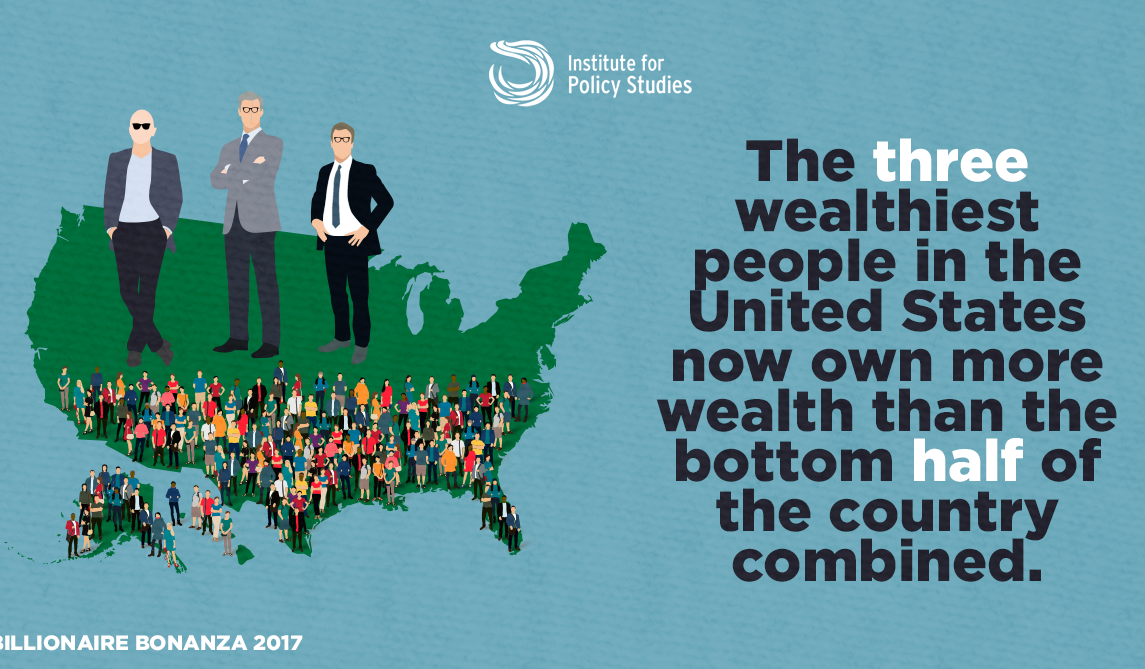 “How often do you see on television any discussion of poverty in America? Do you ever see it?” Sanders asked. “Practically not at all,” he answered. “What I would say to our friends in the corporate media is start paying attention to the millions of people who are struggling economically every single day. Let’s talk about that issue.”

While each member of the panel made important and meaningful contributions, Hamilton, perhaps the least publicly recognizable figure on stage, provided the most insight.

“The way we deal with economic precariat is to discipline the poor. We try to cajole the private sector to deal with problems” he said. “This hasn’t worked for the past 40 years.”

“The frame that’s needed is to empower people,” he added. “Poor people are the most exposed to exploitation. The list of despair is long, it’s not just income and economic, it’s vulnerability to stress, stigma, natural disaster.”

He went on to quote another titan of the progressive movement, the Rev. William Barber II. As Hamilton put it, citing Barber, “Economic justice should be a moral imperative. Why are we relying on the private sector to begin with? Somebody’s dignity should not be based in the profit of a firm.”

“The way we deal with economic precariat is to discipline the poor. We try to cajole the private sector to deal with problems. This hasn’t worked for the past 40 years.” - Darrick Hamilton

At its root, the discussion of what to do about inequality is a discussion of moral values. It’s about dignity and respect for ourselves and one another. And certainly, it’s about money.

On this front, Hamilton doesn’t mince words. “If we’re going to talk about a middle class and economic security, we need to talk about wealth,” he said. “And if we look at wealth, we know wealth is both the beginning and the end of economic insecurity or security. It’s not just wealth as an outcome, it’s what wealth can do for your life.”

Studying the distribution of wealth in the United States has been the main focus of Hamilton’s career. His seminal work is in the creation of an entire field of study on inequality — stratification economics, he calls it.

Hamilton, with his frequent co-author and mentor Dr. William “Sandy” Darity, has published groundbreaking studies on the racial wealth divide, including one cited by Elizabeth Warren that showed that average black households in Boston own just $8 in wealth.

While cable television may be ignoring the unchecked rise of inequality, it’s clear that Sanders has found a way around this obstacle. People are listening and getting engaged and, as poll after poll shows, they want something done about it.

The massive online following Sanders developed during his presidential campaign has given him the Midas touch on social media, with each video and article he shares reaching millions of viewers. Perhaps, with a little competition, the corporate television execs will shift away from ignoring the poor to embracing solutions to poverty.

Perhaps the balance of power might shift with them.

This piece was originally published in Inside Sources.

Josh Hoxie is director of the Project on Opportunity and Taxation at the Institute for Policy Studies and co-editor of Inequality.org.

How to Track CEO-Worker Pay Ratios