Blacks and Latinos Will Be Broke in a Few Decades

New research shows that if the growing racial wealth divide is left unchecked, median Black and Latino families will be penniless within a few decades. It doesn’t have to be this way.

Many people see progress on racial equity in the U.S. as a steady march forward, in which people of color become more equal with their white counterparts as the years go by.

Those are people who don’t pay attention to household wealth figures.

A new report I co-authored, “The Road to Zero Wealth,” looks at the past 30 years of wealth accumulation across racial lines, as well as what the future will bring if current trends continue. Our findings were bleak.

The divide between the wealth of a typical black family and a typical white family today is vast. A median black family has just $1,700 in wealth—total assets minus total debt. Thirty years ago, that same family had $6,800 in today’s dollars. Latino families at the median have similarly small assets, just $2,000, and also saw a decline over the past three decades. 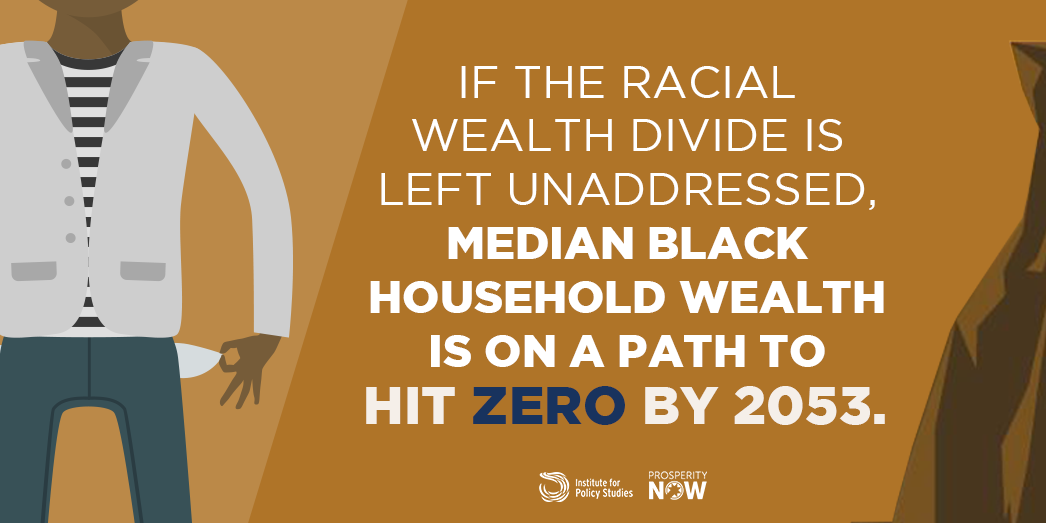 Even those black and Latino families who’ve achieved the traditional markers of middle class life—a good-paying job and a college degree—still lag far behind their white counterparts in terms of wealth. Black and Latino families with a member holding a four-year degree own just a fifth of the wealth of equivalent white families. In fact, they own less wealth than a white family whose head has just a high school diploma.

These numbers represent a troubling trend in which assets and economic opportunities are channeled away from families of color and toward white families.

The enduring legacy of slavery and the Jim Crow era contribute to this growing divide. For instance, just 2% of the heavily subsidized mortgages made available by the Federal Housing Administration in the 30 years following the Great Depression went to non-white households. Homes are the biggest asset most middle-class families own, so this sort of federally sanctioned discrimination created a huge, intergenerational disadvantage for the black and Latino families left out.

Modern public policy decisions rooted in expanding inequality also play a significant role. One such policy is America’s complex system of tax expenditures—essentially discounts handed out to certain groups and individuals that together total more than a half a trillion dollars in public spending each year.
One example is the mortgage interest deduction, a tax break designed to promote homeownership. Unfortunately, the deduction is only available to those who itemize their tax returns, which skews the beneficiaries heavily toward the already wealthy—who are disproportionally white.

Changing our priorities around tax incentives, as well as investments in bold new programs like Children’s Savings Accounts (CSA) and a federal jobs guarantee, could reverse the decades-long rise in the racial wealth divide. Had Congress instituted a robust universal CSA program in 1979—seeding small savings and investment accounts for all children that could mature as they grew older—the white-Latino wealth gap would have disappeared by now and the white-black gap would have dropped by 82%.

Policy changes like these would require bold leadership from across the federal government, including Congress and the White House. In today’s political atmosphere, marked most often by scandal and regressive policy decrees as well as congressional gridlock, this does not appear forthcoming.

The good news, however, is that the policies needed to begin to turn the tide on our growing divide are readily at hand. We know what the problem is and how to fix it. Building the political will, and political power, to put such policies in play is the next step.

Read “The Road to Zero Wealth"

Josh Hoxie is director of the Project on Opportunity and Taxation at the Institute for Policy Studies and co-editor of Inequality.org. This article originally appeared in Fortune.

Make America Civilized for Once