USPS is a vital source of decent jobs for Black workers. It could also narrow the racial wealth divide by expanding financial services.

The United States Postal Service is under strong pressure to make deep spending cuts that would be devastating for customers and employees across the country. Black families have a particularly large stake in the debate over the future of this vital public service. USPS has long been a major source of good middle-class jobs for Black workers. Post offices are also well-positioned to address the needs of the disproportionate share of African Americans who currently lack access to affordable financial services.

The Postal Service began employing African Americans shortly after the Civil War. It became a major source of good, middle class jobs for African Americans in the early 20th century. During the 1940s, civil rights advocacy, combined with wartime needs, created even more opportunities for Black postal workers. By the mid-1960s, African American leadership had increased significantly, with the three biggest post offices in the country — New York, Chicago, and Los Angeles — all headed by Black postmasters. By the end of the 20th century, African Americans comprised 21 percent of all U.S. postal employees.

In 2020, Black workers made up nearly a quarter of the Postal Service workforce — more than double their share of the total U.S. labor force. According to Institute for Policy Studies analysis of Bureau of Labor Statistics data, postal workers have the highest average annual wage ($51,740) and the highest median hourly wage ($25.03) among the 10 occupations with the heaviest representation of Black workers. Four of these 10 occupations have median hourly wages below $15 per hour. Of the 10 most heavily African American occupations, the Postal Service employed the fifth-largest number of workers (see Table).

The Center for Economic and Policy Research notes that the wage gap between white and Black workers is narrower among postal workers than among private sector employees. The Economic Policy Institute has found that Black workers’ share of USPS jobs is significantly higher than their share of all public sector jobs. 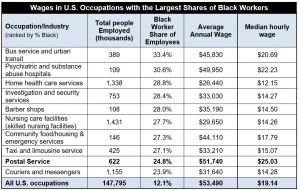 The pandemic has created enormous challenges for USPS because of the strain on the workforce due to the virus, a drastic increase in demand for package deliveries, and plummeting mail volumes as businesses have cut back on advertising. The agency’s reported financial losses are also artificially inflated by a mandate to prefund their retiree health benefits 50 years in advance. This prefunding mandate, which no other corporation or government agency faces, accounted for 84 percent of USPS reported financial losses from 2007 to 2020.

Instead of making more cuts to the Postal Service, policymakers should repeal the pre-funding mandate and explore new revenue sources, particularly those that would help meet important social needs, such as postal banking.

Black families would benefit significantly from expanded postal financial services. According to an FDIC survey, 13.8 percent of Black households and 12.2 percent of Latino households did not have bank accounts in 2019, compared to just 2.5 percent of white households. Lower-income households and adults with disabilities were also more likely than other Americans to be “unbanked.”

Among all families without bank accounts, the most-cited reason was that they couldn’t afford minimum balance requirements. Other major reasons included distrust of banks, high and unpredictable fees, and inconvenient locations. A 2019 S&P Global report found that majority-Black neighborhoods have lost more bank branches than non-majority-Black neighborhoods. JPMorgan, for example, reduced the number of branches in majority-Black areas by 22.8 percent from 2010 to 2018, compared to a decline of 0.2 percent in the rest of the country.

With more than 31,000 post offices across the country and a high level of public trust, USPS is well-positioned to provide dependable, affordable financial services. According to a 2015 USPS Office of Inspector General report, expanding postal financial services such as check-cashing, ATMs, and electronic money orders could generate as much as $1.1 billion in annual revenue.

Members of Congress have introduced legislation for two approaches to expanded postal financial services. These include a Treasury-backed savings system at the post office similar to what existed in the United States from 1911 to 1967 and individual FedAccounts accessible through local post offices in conjunction with the Federal Reserve.

These proposals would provide reliable, affordable alternatives to predatory financial firms. They could also facilitate distribution of federal stimulus checks.

Every community across the United States benefits from a strong USPS. Rather than weakening this vital public infrastructure, policymakers should focus on strengthening —and expanding — this service to meet 21st century needs.