Taking on a Billionaire Landlord in the Twin Cities

The doorknobs were busted again. But this time Arianna Anderson’s son was trapped in the bathroom. Out of desperation, she called the fire department, which came and busted down the door, freeing her son.

“Nine out of ten times I call the landlord HavenBrook Homes for a repair, they don’t come,” said Anderson, who lives with her fiancé and children in a single-family house in North Minneapolis. “I’ve learned how to fix things myself watching YouTube videos. When they do send someone, it’s some Craigslist contractor that does a half-baked job.”

In North Minneapolis, the corporate landlord HavenBrook Homes owns 215 single-family homes, scattered over dozens of residential blocks. Altogether they own 265 homes in Hennepin County and over 500 homes across Minnesota, with the highest concentration in a couple of Twin City neighborhoods

“We found there were four or five HavenBrook rental homes on a single block, but the neighbors didn’t know they had the same landlord,” said Chloe Jackson, a veteran organizer with Inquilinxs Unidxs Por Justicia/United Renters for Justice. “One of the first things we did was map HavenBrook’s ownership and connect tenants to one another.”

Cashing in on Our Homes

Through Inquilinxs’ organizing, neighbors discovered they had many of the same challenges with an unresponsive corporate landlord owned by remote investors. They came together to press the owners and local officials to hold the owners responsible. Organizing tenants of a super-absentee corporate landlord during a pandemic has its challenges, but Jackson and her co-workers are undeterred.

“Thanks to United Renters, I met my neighbors who also had HavenBrook as their landlord,” said Arianna Anderson, who has been a HavenBrook tenant since October 2014, but hadn’t met many of her neighbors. “During the pandemic we’ve exchanged phone numbers, had Zoom meetings two times a month, and talked together with state and city officials.”

“Getting people together so they can hear each other’s stories was our first step,” Chloe Jackson explained. “So many people feel alone facing their housing challenges. Our role was to help educate these tenants about their legal rights and remind them that they have power together.” 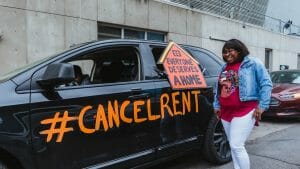 Door to door research of over 150 North Minneapolis tenants found that over 35 percent of residents reported issues with water leaks, plumbing and damage; nearly a quarter reported pest infestation; and one in ten have problems with black mold or mildew.

“There are so many things wrong with this house,” said Adrianna Anderson, even texting the authors shocking pictures of black mold and cracked ceilings. “I have a son with asthma, so the mold problem is a big problem, along with leaking ceiling, insect infestations, nails coming through floors, and missing insulation. And it is cold in the Minnesota winter!”

“The place badly needs an electrical upgrade and I’m terrified we might have an electrical fire,” said Anderson. “Sometimes I leave for a doctor’s visit and the older kids, one who is 18, are watching the younger ones -they can’t come to the doctors during the pandemic. Every time I remind them of what to do in a fire. But it is nerve-racking.”

In 2018, HavenBrook Homes was purchased by Front Yard Residential, an investor group based in the Virgin Islands. Then, in 2020, Front Yard was acquired for $2.5 billion by Pretium Partners and Ares Management, another group of private equity investors co-founded by Anthony Ressler, a billionaire and brother-in-law of Leon Black of Apollo Capital.

The founder and CEO of Pretium Partners is Don Mullen, Jr., who attained global notoriety as the subject of the book and film, “The Big Short.”  Mullen, when he was head of mortgage and credit investments at Goldman Sachs, made substantial bets that the housing market would burst, even as the firm urged customers to continue fueling the housing bubble.

Mullen was credited with organizing other Goldman Sach’s colleagues to short the market –what became known as “the big short” — exhorting them in a 2007 email that they “will make some serious money.” Now Mullen is betting that millions of people, many of whom lost their homes in the 2008-2009 economic meltdown, will be permanently stuck in rental housing.

This example of consolidation is part of a larger trend, as ownership of rental properties shifts from local owners to national corporate giants – who have expanded into the single-family home rental market. 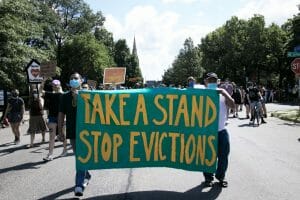 Private equity conglomerates ranging from Blackstone to Apollo Capital believe there is money to be made by snatching up single-family homes, often in foreclosure, and renting to the growing segment of the population that is locked out of homeownership. Managing and maintaining these properties — and dealing with the fact that there are real human beings living in them as homes — is just another cost to be squeezed.

As a national tenant eviction moratorium imposed by the Center for Disease Control is set to expire on March 31, 2021, the role of billionaire landlords is getting dramatic attention.

A new report, “Cashing In On Our Homes: Billionaire Landlords Profit as Millions Face Eviction,” focused on 20 billionaire landlords and real estate investors –including the owners of HavenBrook Homes — whose wealth totals $194 billion, with their wealth increasing $21.2 billion over the year of the pandemic.  These 20 corporate landlords control nearly 2 million units of rental housing, roughly 4 percent of the nation’s rental housing stock.

These billionaire landlords – many of whom have received federal government assistance in the form of low-cost financing to buy or build developments as well as subsidized rental assistance – are receiving financial support from the coronavirus relief package, sometimes while continuing to file eviction notices against their tenants.

According to the report, the twenty companies profiled have pursued at least 3,152 evictions in just 29 counties in eight states where the data is easily accessible – even during the pandemic moratorium. The number nationwide is likely to be many-fold higher. The report includes data showing that nearly one in 10 Black and Latinx renter households face imminent eviction, twice as high as white renter families.

These 20 corporate landlords are also poised to further consolidate their ownership with an estimated $245 billion in “cash on hand” –what the private equity barons call “dry powder” – to expand their rental property ownership during the coming years.

As the report observes, “Leaders and owners of corporate landlords are openly delighting in plans to profit once millions of Americans are evicted, seeing housing as an “opportunity sector” where they can extract more wealth for investors and themselves.

They are poised to profit from the pandemic economic downturn much as they capitalized on the 2008 financial crisis and mortgage meltdown, with plans to buy up more real estate and increase their stranglehold over the residential housing market,” the report says.

For tenants in HavenBrook Homes, one challenge is “who do you call?” when there is a possum living in your wall? Or worse, when your pipes freeze or your electricity goes out.

“Tenants call or visit the office and it feels like each week there is someone new there. During Covid-19 there is no one there, so they might be told to call an 800 number for Front Yard, with someone answering the phone in Atlanta,” said organizer Chloe Jackson. “It’s not like a local landlord, where you show up at their house and demand action. There is no local face of the owner.” 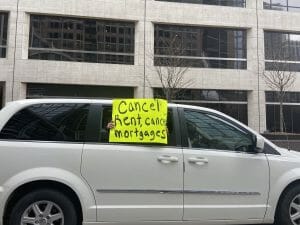 “When it comes to repairs, HavenBrook is often missing in action,” said Jackson. “One tenant had no water for a week and another went weeks without heat. Another had a giant hole open up in their ceiling. Another’s stove caught fire. These are emergency situations, yet Havenbrook wouldn’t make repairs.”

“HavenBrook is only reachable when the rent is due, but not when repairs are needed,” said Shanika Henderson, who has been a tenant in a HavenBrook single-family home for 7 years. “I can’t get a hold of anyone. I’ve got vents that kick up dust when they run and stifling heat in the summer.”

“Sometimes I feel helpless and hopeless,” Henderson said. Through United Renters for Justice she met neighbors on her block who are in the same boat. She has joined conference calls with city councilors. “Everyone deserves a right to proper housing, no matter what your family situation is.”

Tenants, with support from Inquilinxs Unidxs, have documented the problems, called the city, filed complaints, and testified before city councilors to enlist their support. City records show that FYR/HavenBrook Homes has received over 200 citations for violating city laws in North Minneapolis since 2018.

Tenants reported that in some cases the company has taken up to a year to complete needed repairs that pose a threat to both residents and the property. These delinquent upkeep issues have included holes in roofs and ceilings, broken outdoor and indoor stairways that have caused injuries, lead paint — including where children are present — flooding that has caused substantial water damage to properties and pest infestations such as spiders, ants and mice.

“Another ridiculous HavenBrook thing is you have to pay money to pay your rent,” said Jackson. “They direct you to pay your rent through an online portal where a vendor charges you $10 to $30 each time you process your rent payment. These are the kind of fees we are organizing to get HavenBrook to eliminate.”

For billionaire landlords and their private equity firms, buying and selling these real estate companies is like playing a game of three-dimensional chess. Organizations like Inquilinxs Unidxs Por Justicia are there to remind these players that these are people on the board.

This article was originally published in YES! Magazine.

Who Are the 10 Biggest Pandemic Profiteers?

Foundation Payout Mandate Would Raise $8.7 Billion in Revenue Over 3 Years