Organizers take to the streets to call on Big Pharma to halt its assault on popular reforms to lower prescription drug prices.

Armed with a “STOP PHARMA GREED” banner and a large, menacing image of a greedy industry executive, member leaders from People’s Action rallied in front of the Pharmaceutical Research and Manufacturers of America (PhRMA) Washington, D.C. headquarters Tuesday to protest drug companies’ relentless pursuit of profits at the expense of everyday people.

Attendees delivered a letter to PhRMA, signed by a growing coalition of national and local progressive organizations, demanding they halt all lobbying efforts.

“Elected officials are parroting your talking points: the high prices of prescription drugs are necessary to promote innovation and the development of new medications. This is a lie,” the letter reads. “Organizations like yours, whose sole job it is to represent the interest of corporations, are trying to force policy makers into a false choice between affordable drugs for millions of Americans now, or the continued development of new medicines in the future. People’s lives are on the line.”

“For far too long, it has not been Congress that has been regulating the pharmaceutical industry,” Sanders said. “Right now, they are spending many millions of dollars on campaign contributions, on TV ads, and on lobbying in order to defeat the $3.5 trillion reconciliation bill that will finally lower the price of prescription drugs by giving Medicare the ability to negotiate with the pharmaceutical industry. Well, today, we tell Big Pharma clearly: Your days of calling the shots in Washington, DC are over.” 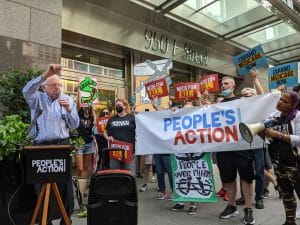 The prescription drug pricing reforms proposed by the Democrats are overwhelmingly popular among the general public, with only 27 percent of Americans holding positive views towards the pharmaceutical industry. Even former President Donald Trump has expressed support towards negotiating lower prescription drug prices, which makes the Democratic opposition to the provision all the more frustrating for the public.

“Big Pharma is the most hated institution in the U.S., according to Pew Research,” Alex Lawson, Executive Director of Social Security Works, told Inequality.org. “That is because their business model is restricting access to all medication with prices that leave many sick, some dead, and a tiny few grotesquely rich. Pharma’s time of openly corrupting the political system is over. We will make sure of that.”

If you follow the money, however, the opposition from Rice, Schrader, and Peters to drug price controls should come as no surprise. Despite the proposal having support from 90 percent of registered voters in their districts, money from Big Pharma has proved to be too enticing. Over the course of their respective careers, Peters and Schrader have raised a combined $1.5 million from donors in the pharmaceutical and health products industries, with Peters as the top recipient of Big Pharma cash this election cycle.

A similar story is currently playing out in the Senate, where Sen. Kyrsten Sinema (D-AZ) received a boost from a dark money pharma group just before she voiced her opposition to the provision.

While it is easy to get caught up in the inside baseball of Capitol Hill politics, Tuesday’s protest served as a reminder of the human impact of Big Pharma greed.

“Big Pharma’s obsession with profit hurts real people,” Jaime Izaguirre, a health care organizer at Iowa Citizens for Community Improvement, said at the rally. “I lost my brother because his insulin was too expensive. I’m here today to fight for him and the millions more who can’t pay for life-saving drugs.”

Sharing their personal stories in front of the Capitol, care workers and disability rights activists make a powerful case for expanded care infrastructure.

Organizers take to the streets to call on Big Pharma to halt its assault on popular reforms to lower prescription drug prices.

Unemployment Insurance Isn’t Holding Back the Economy. Inequality Is.

Ending enhanced unemployment benefits didn’t get people back to work. It just made them poorer.

Will Fanboys for Grand Fortune Ever Flame Out?