Sometimes a headline writer can get carried away. Way away.

In fact, “paychecks” in the United States — the wages workers receive for their labor — are not rising, as the actual article under the Post front-page headline makes clear. The U.S. Census Bureau’s just-released latest annual report on American incomes, that article notes, furnishes “little evidence that employers are rushing to offer raises to those who already are employed.”

In 2016, the new Census stats show, the take-homes of America’s full-time workers ended up “not statistically different” from their 2015 levels. Take-homes, overall, remain essentially stagnant.

What the latest research tells us

What’s been increasing? The incomes of America’s affluent, the latest Census figures show, are pulling away from the rest of the nation. In 2016, households in the top 5 percent saw their incomes increase over twice as fast as households in the bottom 20 percent.

What about the top 1 percent? Census Bureau researchers make no effort to track the incomes at America’s economic summit. We have to look elsewhere — to tax data, for instance — to get a fuller sense of how unequal the United States has become.

Economists like Thomas Piketty and Emmanuel Saez have been doing this looking ever since the 21st  century began. But even tax records have flaws. They’re becoming particularly less accurate yardsticks for income as super-rich taxpayers conceal more and more of their wealth in offshore tax havens.

One key collaborator of Piketty and Saez has, fortunately, been working diligently to track those hidden offshore billions. This ace statistical sleuther, Gabriel Zucman of the University of California at Berkeley, has just co-authored new research that gives us the clearest picture yet of how much income and wealth is concentrating in the pockets of our global richest. 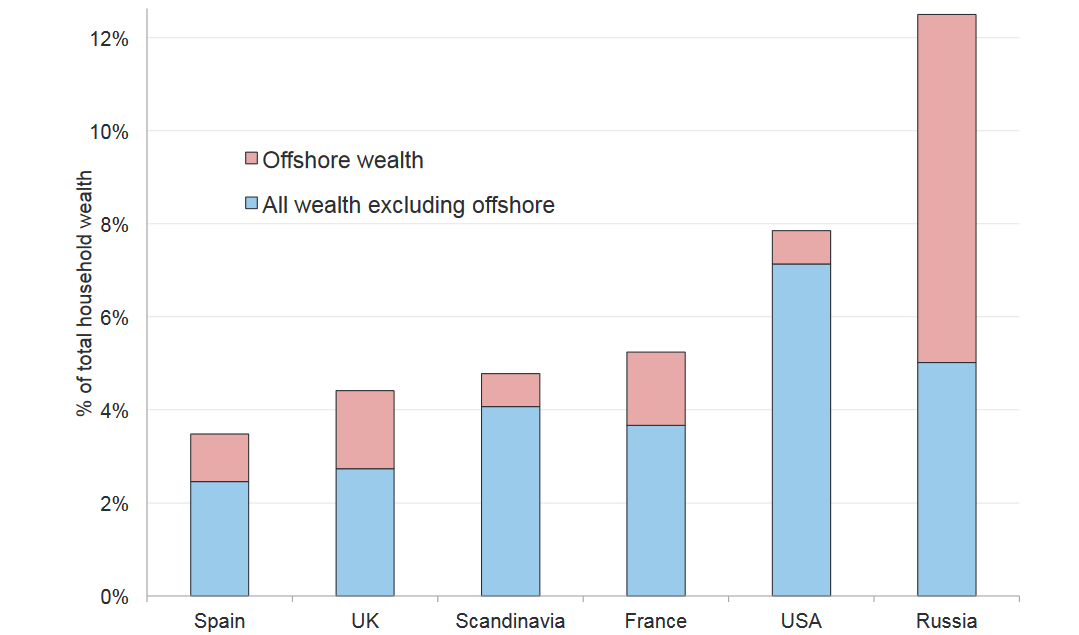 Earlier Zucman research had estimated that 8 percent of the world’s household financial wealth is sitting offshore in tax havens. The vast bulk of the income that wealth throws off goes untaxed — and unrecorded in national income distribution figures.

Zucman’s newly published research, conducted with scholars from Norway and Denmark, factors into national statistics the wealth hidden away in tax havens. The top 0.1 percent globally, the research calculates, now holds nearly 80 percent of offshore wealth. The top 0.01 percent share? A little over half of all offshore wealth.

What happens when we incorporate this offshore loot into figures for national wealth distribution? The top 0.1 percent share of America’s household wealth ratchets up from 19.1 to 21.1 percent.

The top 0.01 percent, meanwhile, as of 2014 held 11.2 percent of household wealth in the United States, once we factor in offshore wealth. That share has jumped up from 6.9 percent in 2000 — and quadruples the 2.6 percent share of America’s wealth the top 0.01 percent held throughout the 1970s.

One cheery thought to keep in mind as we contemplate all these numbers: The first few years of the 20th century saw plutocracy on the same sort of roll we see now. But that plutocracy would essentially vanish by mid century. Our forbears became significantly more equal. We still could, too.

Qatar has our world’s attention, but nearby — and deeply unequal — Dubai might be charting our future.

Tax Cuts for the Rich Help the Rich, Not You