Thousands of the subcontracted workers who prepare and deliver in-flight meals are demanding better pay and healthcare from the multi-billion dollar airline industry.

Airline catering workers are banding together this summer with a clear message: one job should be enough. Thousands of the subcontracted workers who prepare and deliver in-flight meals are voting to go on strike, demanding better pay and healthcare from the multi-billion dollar airline industry.

Workers from around the country came together for a picket line on July 23 at Washington National Airport, joined by elected officials and other allies. Their specific target was American Airlines, one of the many airlines profiting off their labor by contracting out their food and beverage needs to companies that pay workers poor wages. The protest is one of the dozens of actions workers have held in recent weeks as they move closer to a strike, thanks to unsuccessful negotiations with the subcontractors that employ them.

Stephanie Kopnang, an airline catering worker from Dallas, spoke with Inequality.org about the poverty wages many of the workers in her kitchen receive — sometimes as little as under $10 an hour. Yet workers still must pay hefty out-of-pocket fees for healthcare, which can be untenable given the poor pay. “By the end of the month, you are going to be homeless,” Kopnang said. “That’s the reason we are fed up. We need one job in our life and that should be enough.”

Rep. Rashida Tlaib connected the workers’ low pay to corporate greed in an industry with record profits. “If they can’t help you provide for your family, then something is wrong,” Tlaib told the crowd. “Don’t you let anybody ever make you feel like you don’t deserve this.” 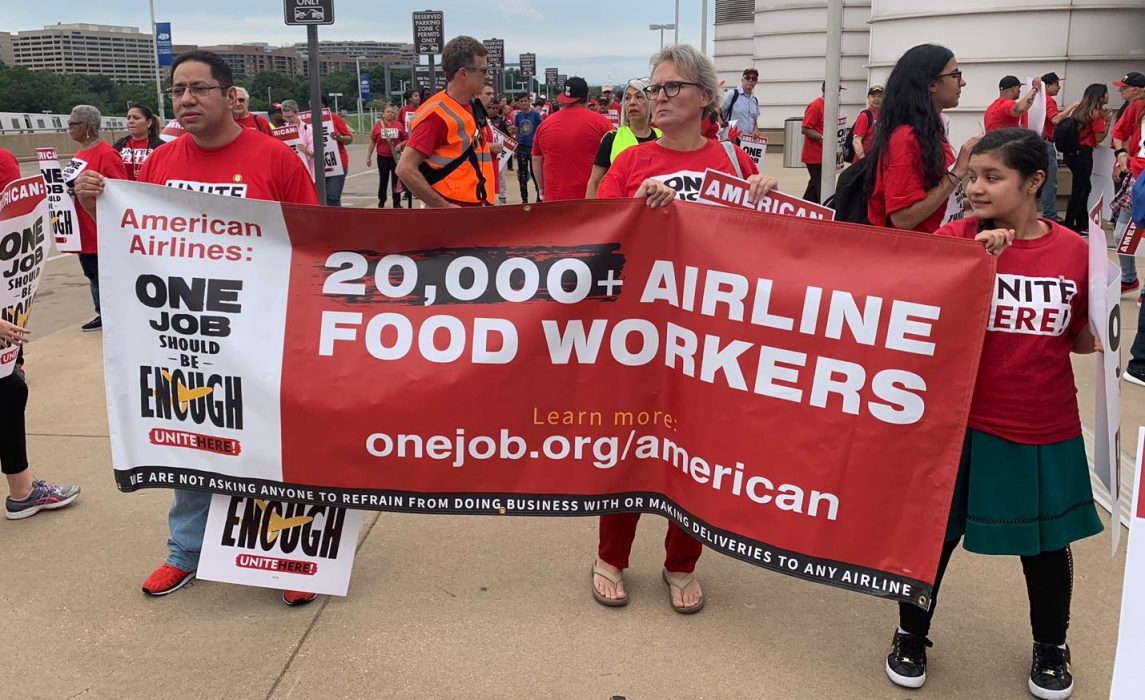 UNITE HERE, the union representing the catering workers employed by LSG Sky Chefs, is seeking government agency approval that would allow for a strike. Though negotiations take place with the subcontractors, workers say the airlines must also take responsibility for worker conditions. The practice of subcontracting allows companies like American Airlines to escape accountability. While airlines might try to absolve themselves from the poor conditions brought upon by the companies they subcontract from, organizers argue they still hold immense power in the negotiation process.

That’s why, as Kopnang told Inequality.org, it’s important to bring the fight to the companies that ultimately allow those conditions to continue. “We will be in Dallas [on August 13]. The hometown where American Airlines lives.” While American Airlines has dropped massive sums on a flashy new campus, Kopnang points out, the caterers who prepare the meals on the airlines can’t pay their rent.

That kind of greed hurts workers across the industry. American Airlines alone pulled in $1.9 billion in profits in 2018, even as their subcontracted workers aren’t paid a living wage. Other airline industry workers, who joined them in solidarity at the protest, could relate.

“[American Airlines] outsourced these jobs,” Sara Nelson, the president of the Association of Flight Attendants, told the crowd. “They set up a scam where they can have contractors bid against each other for the lowest price. We know your scam because you used it on flight attendants too.”

Captain Joe DePete, the president of the airline pilot’s union, told the crowd that the fight for $15 an hour in the richest country in the world is not a radical demand. A fair wage is a necessary precursor to the “safety, and dignity of work.”

Jarod Facundo is a Next Leader at the Institute for Policy Studies.

What Medicare for All Would Have Meant a Decade Ago

Imagine if a new generation could experience guaranteed care, with quality not determined by wealth or income, but instead delivered as the human right it should be.

Thousands of the subcontracted workers who prepare and deliver in-flight meals are demanding better pay and healthcare from the multi-billion dollar airline industry.

A Bus Tour Pushes For Higher Taxes on the Rich

Tax cuts have funneled wealth upwards to the richest for decades. Activists have convened a nationwide bus tour to prove how unpopular those tax policies have been.

Can the Wealthy Hardwire Inequality into Our DNA?

A Lesson from West Africa, a Global Inequality Ground Zero